Watch: Man launches into racist rant on Ryanair plane — but keeps his seat 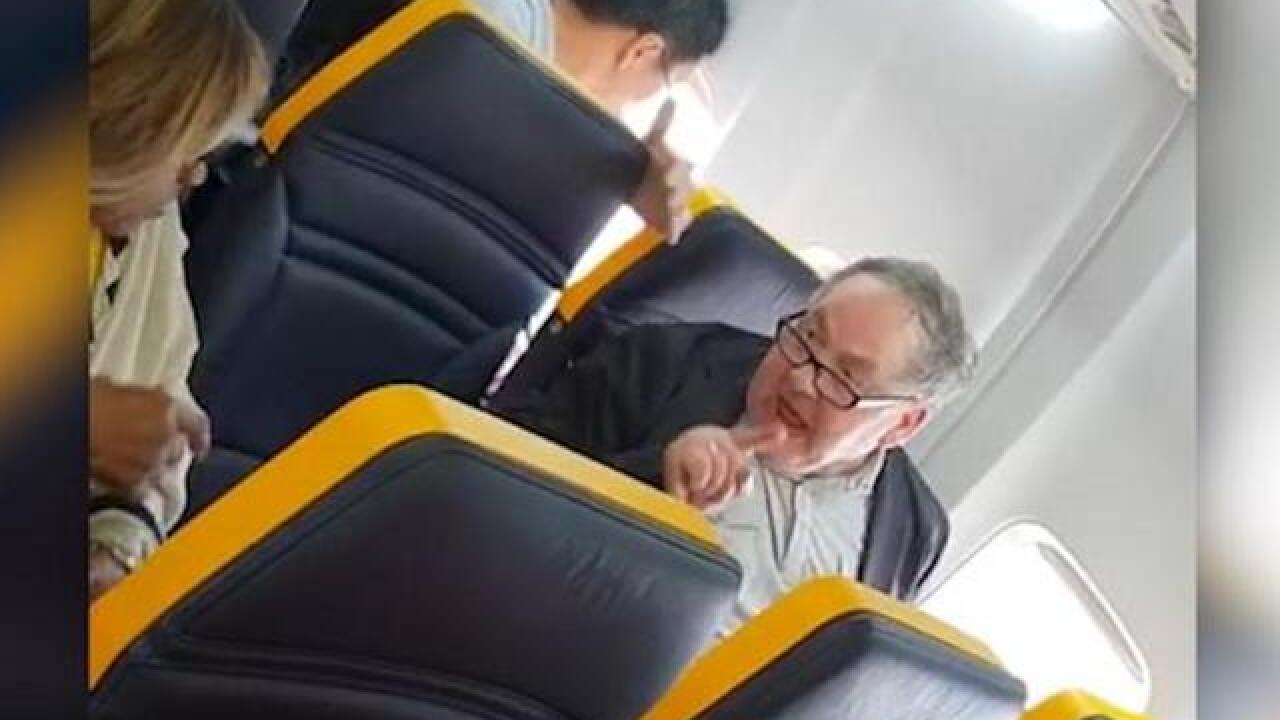 © 2018 Cable News Network, Inc.
CNN
<p>A passenger on a Ryanair flight berated another passenger for speaking to him in a foreign language, but he wasn't<br /> removed from the plane.</p>

U.K. police have appealed for witnesses after a passenger on a European airline made racist remarks about another passenger that were caught on video.

The man had threatened to "push" an elderly black woman onto another seat.

A crew member of the Ryanair flight from Barcelona, Spain, to London intervened, but the flight took off on Friday with at least one passenger wanting the unidentified man who made the remarks to be booted off the flight.

In the footage, a man in a window seat was heard saying he refused to sit next to an elderly woman seated in an aisle seat. The man hurled insults at the woman and called her an "ugly black bastard" before the flight took off, according to a cell phone video recorded by London-based musician David Lawrence.

Lawrence posted the footage on social media on Friday.

"This incident, which we were made aware of yesterday morning, is believed to have taken place on a plane at Barcelona Airport," said the police force in charge of the region round London Stansted airport, where the flight landed.

"Essex Police takes prejudice-based crime seriously and we want all incidents to be reported. We are working closely with Ryanair and the Spanish authorities on the investigation. We would encourage anyone with information to contact us."

Lawrence, 56, told CNN Sunday in a phone interview: "When you watch the footage, you'll see it starts to unfold where this man starts a torrent of abuse, absolutely disgusting, despicable words thrown at this elderly black woman"

"If that was another situation where that was a black man doing that to an elderly white woman, they would have escorted him off the flight," Lawrence said. "He probably would have ended up in a Spanish jail even today."

In a statement Sunday, Ryanair said: "We are aware of this video and have reported this matter to Essex Police." The airline declined to comment further.

Labour MP David Lammy, who represents the Tottenham area of London, called for a boycott of Ryanair "if they think it's OK for a racist man to abuse an elderly black woman and remain on the plane."

"It's 63 years since Rosa Parks said 'No' to sitting on the back of the bus and we ain't going back," Lammy wrote.

'Get away from my seat'

Lawrence said he was settling into the flight home from a business trip when he heard the commotion.

The woman was sitting two rows behind him on the opposite side of the plane; her daughter was several rows behind her, Lawrence said.

"I heard a man's voice behind me, very loud, very aggressive, shout, 'Get away from my seat. Move your feet now. I need to pass,' " Lawrence recalled.

"I turned around ... and I saw this man standing over the elderly black woman shouting at her to get out of the way," Lawrence said.

In an interview with Huffington Post UK, the woman's daughter said the disagreement started when her mother, who has arthritis, didn't stand up immediately from her aisle seat to allow the man to get to the window seat.

Lawrence told CNN the woman's daughter got up and came to her mother's defense, saying she was elderly and disabled.

'Someone needs to capture this'

It was then Lawrence said he grabbed his phone and started recording, as a flight attendant tried to intervene.

"None of the passengers were getting involved," he said. "There was no one in authority around."

He added: "And so, I thought, someone needs to capture this."

Lawrence recalled some passengers "were giggling."

"I couldn't believe that I was on an aircraft in the year 2018 with this type of attitude, this type of behavior going unchecked, unpunished," he said.

The woman's daughter told the man not to shout at her mother.

"Don't tell me what to do. If I tell her to get out, she gets out," the man responded.

Later, he said: "I tell you, I hope somebody sits there because I don't want to sit next to you," and pointed to the seat between them. Then he called her an "ugly f***ing cow."

When the woman spoke to him in a Jamaican accent, he responded, "Don't talk to me in a f***ing foreign language, you stupid, ugly cow."

A passenger sitting behind the man tried to intervene and urged him to stop.

"I will carry on as far as I can with this ugly black bastard," the man responded.

At one point, the woman told the man, "you stink," and said she would kick him. Then she asked to sit with her daughter.

The flight attendant told the man to calm down and said he would talk to his supervisor.

'I have witnessed firsthand this type of racism'

In the interview with Huffington Post UK, the woman said her 77-year-old mother was returning from vacation to commemorate the first anniversary of her husband's death. Her parents were married more than 50 years, the daughter said.

Her mother, a Jamaican native living in East London, is part of a now-elderly generation of Caribbean residents who were invited by the U.K. government to help rebuild Britain after the devastation of World War II, the daughter told the Huffington Post UK.

"The underlying reason behind the man's abusive behavior comes down to the fact that my mum is a black woman and he didn't want her sitting next to him - he says it in the video," the daughter told the Huffington Post UK.

Lawrence said his parents were part of that wave of Caribbean immigrants in the 1940s and 1950s.

"I have witnessed firsthand this type of racism here in Europe for years," Lawrence said. "There was no way of us sharing that with the world."

"Here I am, now, in this time, where I do have technology, and I'm able to use it in order to show people proof," Lawrence said.