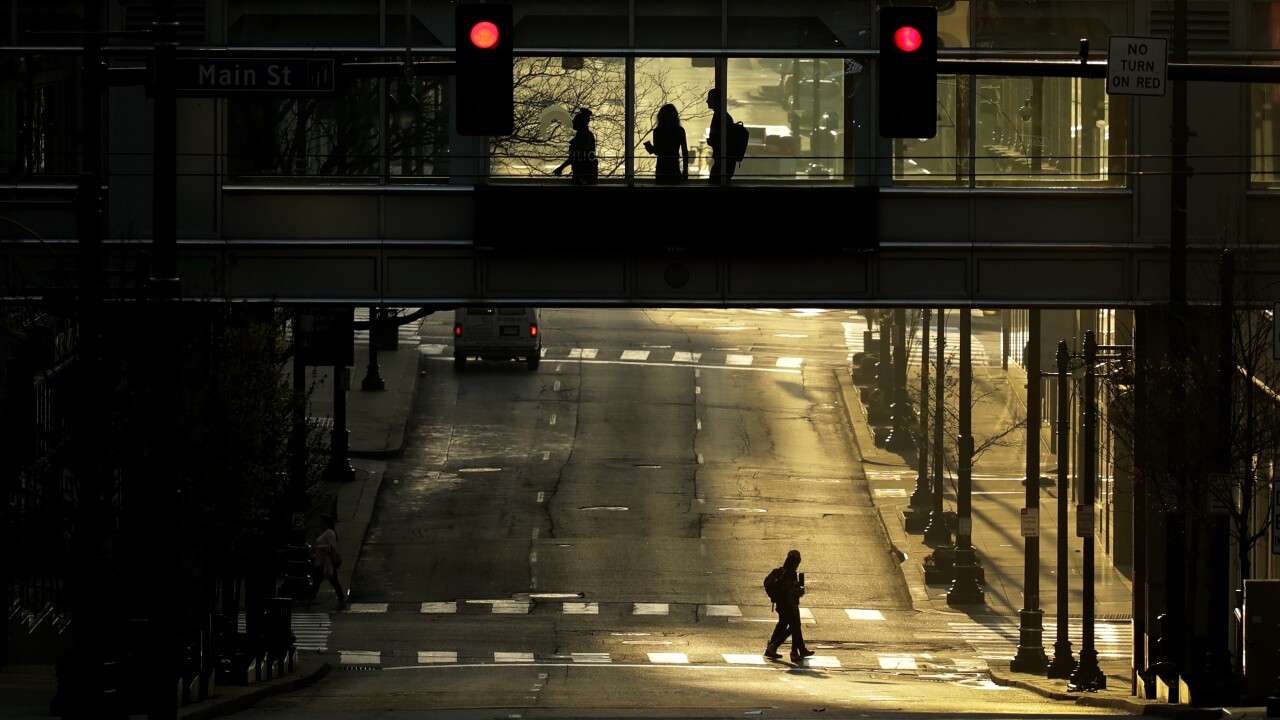 Copyright 2020 The Associated Press. All rights reserved.
Charlie Riedel/AP
FILE - In this April 8, 2020, file photo pedestrians make their way through a deserted downtown Kansas City, Mo., on what would normally be a busy workday morning. There are emerging signs that any recovery will fail to match the speed and severity of the economic collapse that occurred in just a few weeks. (AP Photo/Charlie Riedel, File)

But civic leaders who participated Wednesday in a 41 Action News virtual town hall said the crisis also creates an opportunity to address those divides in Kansas City.

“We’re at a moment in time, because of what’s going on, where we can’t have it be acceptable to say, ‘This is the way it’s always been,’ or that ‘That’s the way we’ve always done it,’” Greater Kansas City Chamber of Commerce President and CEO Joe Reardon said.

Reardon — a former mayor and CEO of the Unified Government of Wyandotte County and Kansas City, Kansas, and former president and CEO of the Kansas City Area Transportation Authority — believes the COVID-19 crisis presents a unique chance to rebuild a more fair economy and re-imagine what the region’s economy should look like when it reopens.

“If we don’t take advantage of what’s going on today to really challenge what we’ve got in front of us to really take new innovative steps to address issues that we’ve known about for a long time, that are revealing themselves in new ways, then we will have missed a real opportunity for Kansas City,” Reardon said.

Access to capital for small businesses has been a hindrance to development in certain parts of Kansas City for decades, if not longer.

But the influx of stimulus money provides a chance to rectify some of that inequity.

“It’s been very different from the federal response — the PPP, which has been great, but it’s not really getting to the small businesses that we see that need those funds,” AltCap President Ruben Alonso III said.

Much of the local small-business relief effort has been directed toward sustaining struggling businesses that lack the strong banking relationships needed to take advantage of depleted federal stimulus programs.

“At AltCap, we have been very focused on trying to get capital to businesses that have historically had challenges accessing capital, specifically minority-owned businesses,” Alonso said. “That was the case in good times. This crisis only exacerbated that. ... There’s definitely a capital divide here within the small business community.”

More help is needed. The KC COVID-19 Fund received $30 million in requests during the first 72 hours and is no longer accepting applications.

But there is hope that a new round of federal Paycheck Protection Protection funding will be better targeted toward small businesses along with money local county governments are expected to receive.

The hope is that a collaborative approach, one that prioritizes fairness and allows all areas of the city and region to participate equally, can help reshape the future of Kansas City’s economy.

“It’s going to go back to how we approach economic development in a very intentional, in a very kind of targeted and tactical way,” Alonso said. “There are considerable disparities that exist, not just with small business’ access to capital, but with education, health, technology.”

The COVID-19 outbreak has “further revealed a lot of what I have been talking about around the inequities that exist in Kansas City,” KCPS Superintendent Dr. Mark Bedell said.

That includes not only economic development east of Troost Avenue, but working to provide quality jobs that pay a living wage, eliminating food deserts, ensuring community mobility and addressing affordable housing, including the rate of evictions in economically depressed areas.

“All of those things are hitting us hard right now,” Bedell said.

KCPS has been underfunded for decades, leaving the district to lag behind and struggle to remain accredited, a problem made worse with schools closed by the digital divide.

“You can’t educate and introduce new concepts when everybody doesn’t have connectivity,” Bedell said.

KCPS has been forced to focus on review, which is in line with state guidelines but also leaves students in the district falling further behind.

Bedell planned to meet with all KCPS building principals Wednesday to discuss the future of the district’s education plan, anticipating further disruption.

“I want to be on the right side of history when this is all said and done,” Bedell said. “Did we make the right decisions to advance education in a way that, in essence, works for all kids?”

He plans to go all in embracing the district’s pivot to technology, which COVID-19 made necessary but should serve KCPS families and students well long after stay-at-home orders are lifted.

“The way the current system is designed, and when you look at our data and look at our data over decades, it doesn’t work,” Bedell said. “It just doesn’t work for the masses that we have to serve in this city. We have an opportunity here to be bold, and there’s a lot of room for grace in understanding.”

'Hope for our future'

Beyond small business and education, the COVID-19 crisis has revealed gaps in health care and technology, which have always existed but are now more apparent and important.

Smart policy making and strategic investment moving forward can help create a rising tide, which will lift all boats and aid the Kansas City area in its eventual recovery.

“I am tremendously optimistic that we are going to rise to this challenge,” University of Kansas School of Public Affairs and Administration Professor Hannes Zacharias said. “This is a way we can reinvent ourselves and handle or deal with some of the social ills and injustices that have been with us for decades. We should seize this opportunity through collaborative involvement from the entire community, and I’m excited about it.”

Perhaps it will take the form of a push for expanded high-speed internet access that blankets Kansas City or perhaps it will be the continued expansion and improvement of public transportation options.

“That’s the hope for our future,” Reardon said. “There’s a lot of energy around saying, how can we as a region take Kansas City to the next level in the midst of a crisis. That’s the opportunity that sits out there for all of us.”

The institutions and systems that foster racism and other inequality weren’t built overnight and won’t be torn down overnight either.

“I’m optimistic, if we recognize and acknowledge those disparities,” Alonso said. “We’ve got to support parts of our community that are being left out. We’ve got to support Dr. Bedell and our public schools. There’s a whole segment of our population that’s not getting the same access to educational services, to resources. There’s a whole segment of our population that doesn’t have the opportunity to thrive economically. ... I really hope we don’t lose the opportunity to see how this crisis has highlighted where we have a lot of gaps to do better.”

If the COVID-19 crisis results in the closing of those gaps, it may prove to be an important measure of hope derived from these troubled times.

“We have an opportunity to unpack and undo some of the tenants around structural racism that has created this significant divide in this city and come out better as a city as a whole ...,” Bedell said. “I hope we are able to dismantle a system that’s by design not working for everyone.”

A future in which more people participate in the economic recovery and shares in prosperity it brings would help drive even greater growth for the region, Bedell said.

“But it’s incumbent upon all of us to say, ‘We’re going to do this, because it’s the right thing to do,’” he said.

Are you interested in learning more about the history of racism in Kansas City and how certain systems reinforce the status quo?