4th and 1: Chiefs can come out of Seattle with 12th win 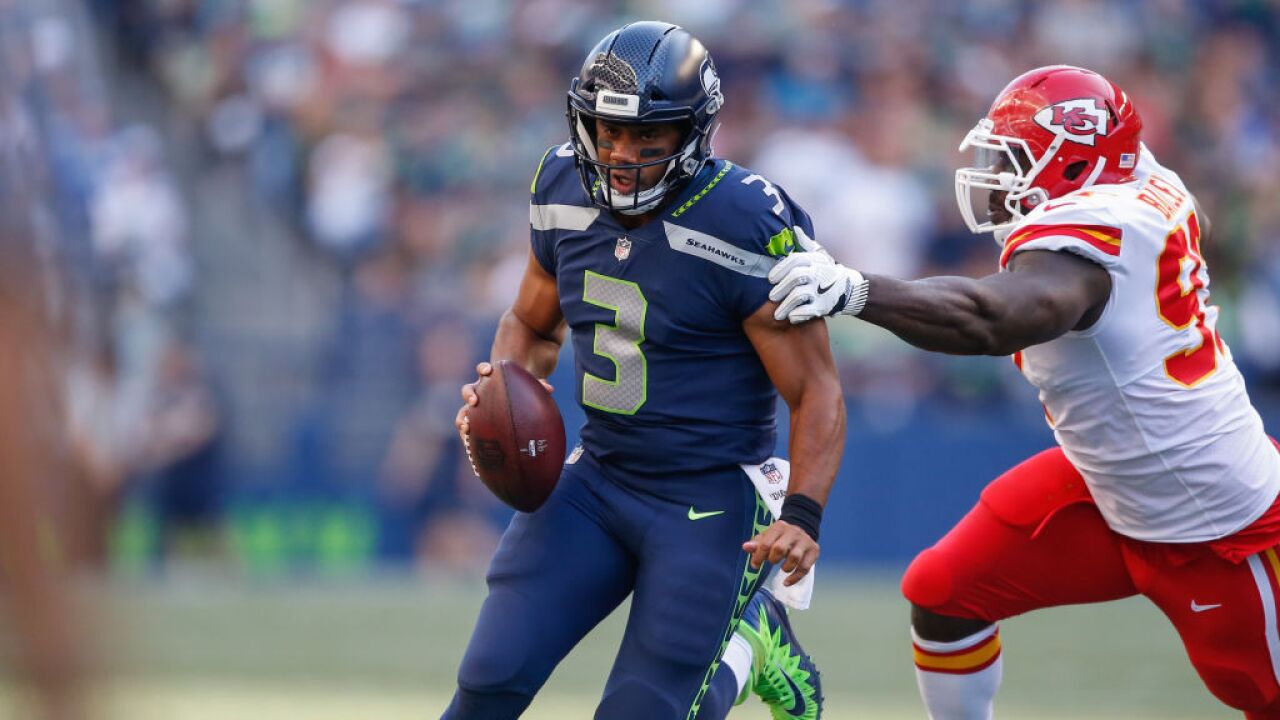 KANSAS CITY, Mo. — The Kansas City Chiefs loss to the Los Angeles Chargers on Thursday Night Football last week has left little margin for error in their final two regular season games. Their path for home field advantage throughout the playoff remains but it won’t be an easy road.

Kansas City will need to either win the next two games or win one with stumbles by the Chargers and potentially Texans. The team will know their options before they hit the field on 41 Action News Sunday night in Seattle.

LISTEN: The 4th and 1 Chiefs podcast previews the Chiefs against the Seahawks

The Chiefs will face an opponent looking to punch their own playoff ticket in the Seattle Seahawks. Seattle couldn’t clinch a playoff berth with a loss to the San Fransisco 49ers in a 26-23 overtime loss last Sunday.

Here is how the Chiefs can come out of Seattle with their 12th victory of the season:

Seahawks will want to play ball control with the run
Seattle wants to run the ball with their read option, dive plays, occasional pitches and reverses. The Seahawks have the No. 1 ranked rushing offense in the NFL. Seattle also features the only running back trio in the NFL with more than 400 rushing yards a piece. Head coach Pete Carroll will likely want to use the rushing game to limit the Chiefs offense to eight possessions like the Ravens and Chargers attempted to do.

The Seahawks lean on their running game to setup up their play-action pass. Chris Carson is their lead back that likes to run north and south but is capable of bouncing outside. Mike Davis is more of their power back with minimal shake and Rashaad Penny excels on their cutbacks and counters with his vision and speed. Quarterback Russell Wilson can get in the mix as well but isn’t the same style of runner he was earlier in his career.

Sets up their play-action pass
Russell Wilson gets into rhythm with the play-action pass game. It is where he finds his comfort zone and his accuracy. The Seahawks rely on their effective running game to create voids in the coverage with defenders selling out to stop the run. Wilson utilizes the under center play-action and read option play-action equally to attack the intermediate portions of the defense.

Will utilize trips formation and scramble drill
Seattle relies heavily on their trips and bunch formations to provide favorable match-ups and stretch out the defensive coverage at the level they are looking to attack. They also utilize it to get Doug Baldwin and Tyler Lockett clean releases off the line of scrimmage. Wilson and his receivers are dangerous once he escapes the pocket. His accuracy throwing on the run is impressive and his receivers find soft spots in the coverage breakdowns to get open. Wilson has struggled with blitzes off the right side and being contained in the pocket this season when a receiver doesn’t come open.

Delayed screens and flats passes are open
The Seahawks defense is very aggressive in attacking the run play side and dropping into their zone coverages. They routinely leave well-timed screens and passes in the flats wide open for opponents to gain first downs.

Play-action pass will be there for the taking as well as trips level routes
Seattle bites hard on run fakes and leaves the intermediate slants, digs, crossing and seam routes wide open. Tight ends and fullbacks are also able to sneak out for intermediate delay routes. The Chiefs would also benefit from utilizing bunch and trips formations with the levels concept. It floods the Seahawks zone coverage and routinely leaves a level open. Seattle also puts their safeties in compromising coverages that are tough to recover from in pursuit angles and their overall range.

Utilize the misdirection jets sweeps, misdirection counters, pitches
The aggressive nature of the Seahawks defense cannot be understated. Teams have found tons of success with 12 and 22 personnel running the ball on their defense. Opponents have been able to run jet sweeps, ghost motions, misdirection counters and tosses with continued success. The tosses and pitch plays have been most successful with a ghost motion built in or a bunch formation that allows the offensive line to pull into space while the bunch seals off the edge.

The Chiefs offense will have plenty of opportunities to keep the Seattle defense off balance and attack all levels of their defense for explosive gains. It will just come down to the defense slowing down the run game to give the Chiefs offense more than eight possessions to win the ball game.

Nick Jacobs can be found on Twitter: @Jacobs71 and can also be heard on the 4th and 1 podcast brought to you by 41 Action News. 4th and 1 is available on iTunes, Google Play and TuneIn. You can check out all the 41 Action News podcasts here.