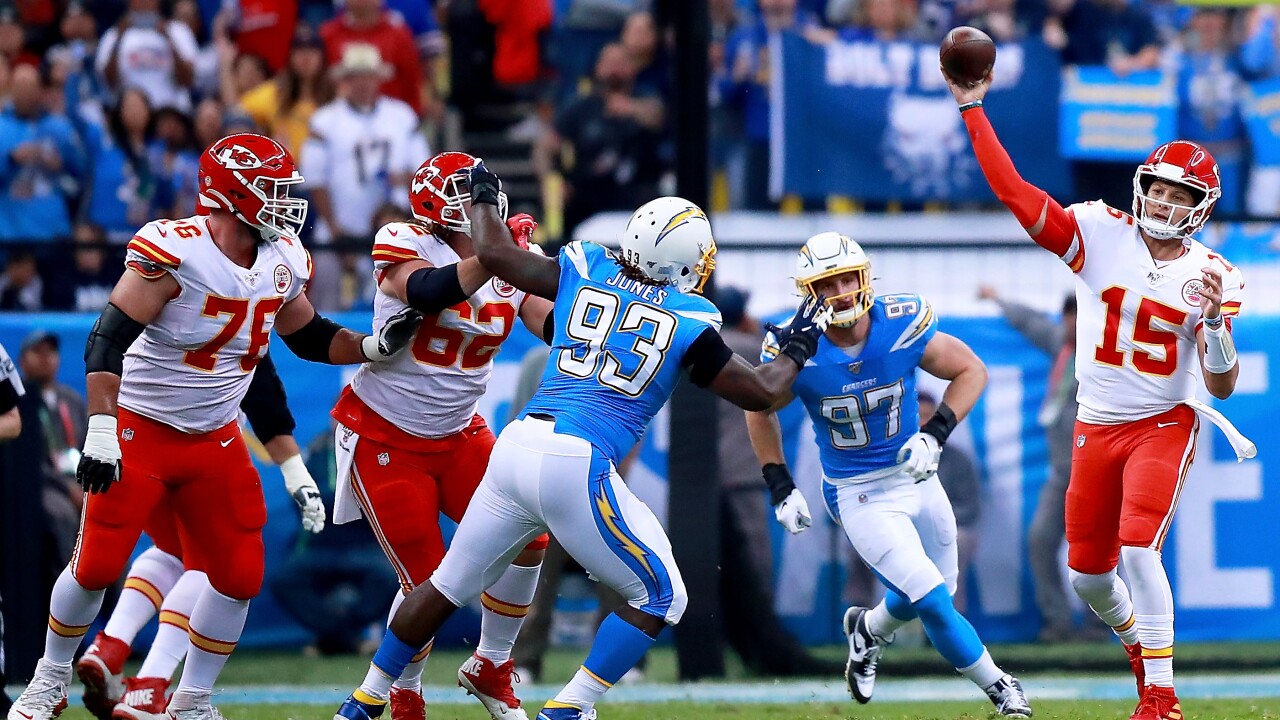 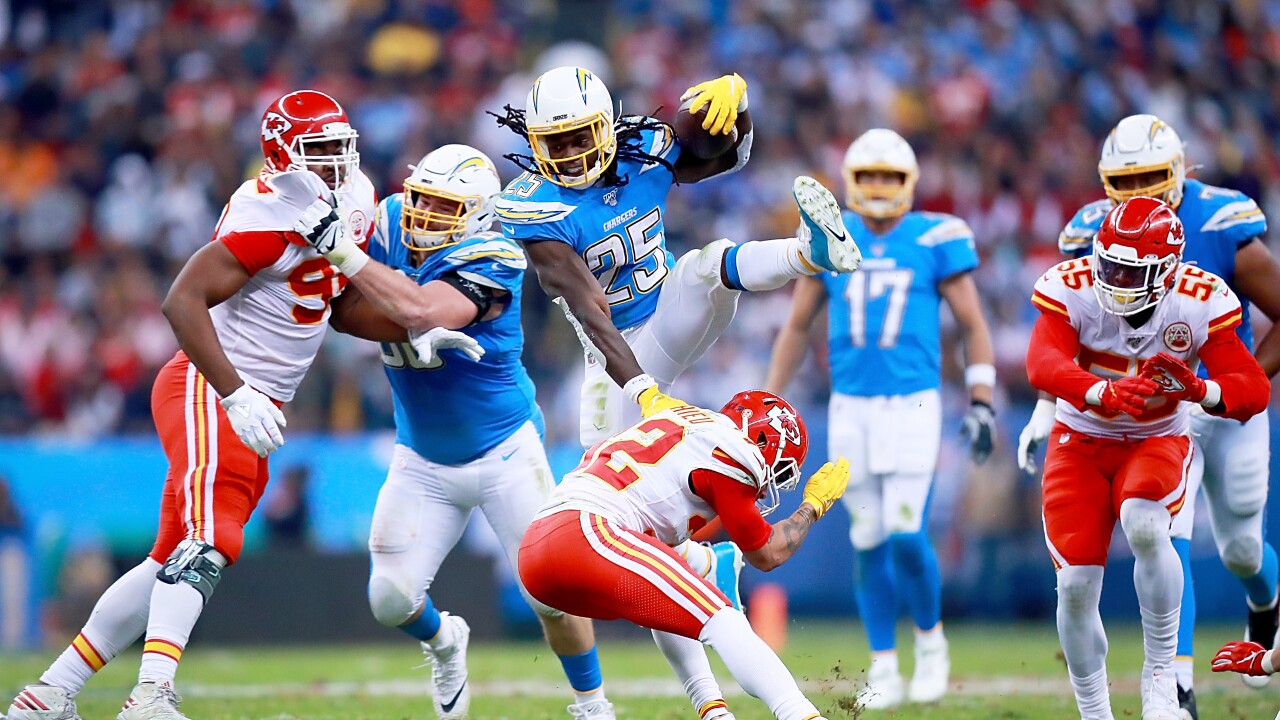 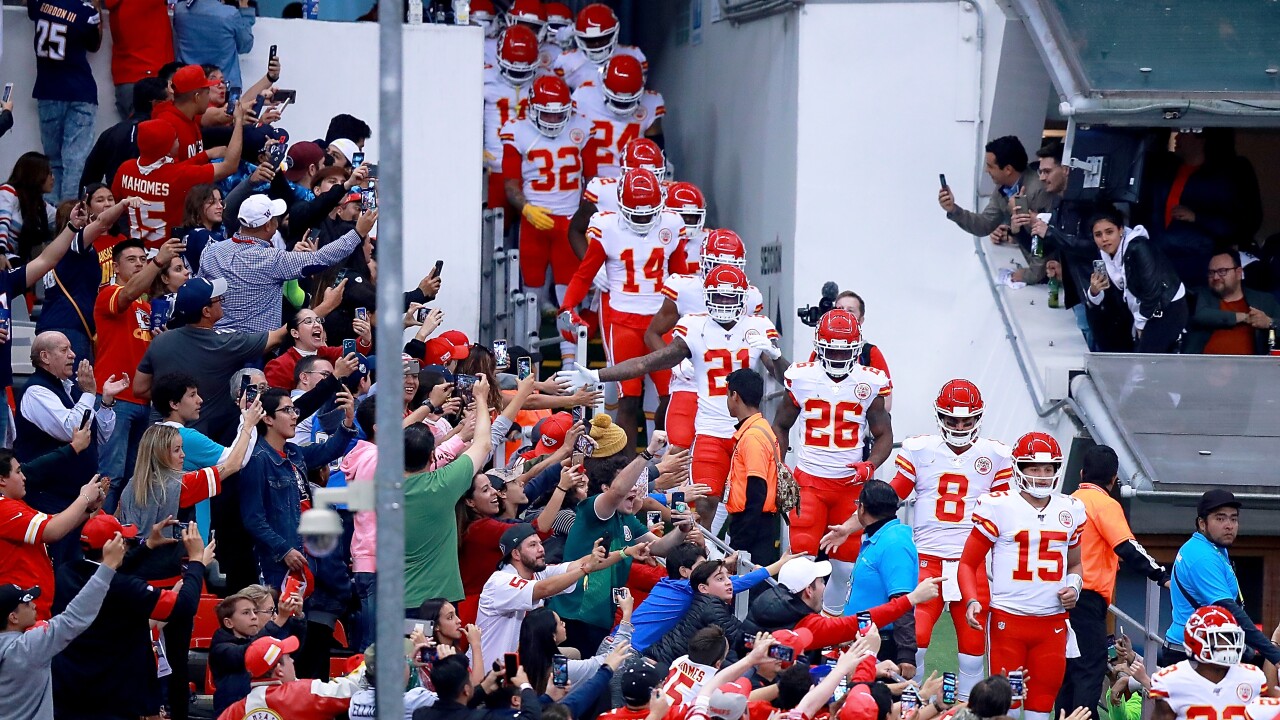 KANSAS CITY, Mo. — The Chiefs took the field Monday in Mexico City tied for first place in the AFC West.

Patrick Mahomes and company return to Kansas City with a half-game lead and some much-needed time off after a 24-17 victory against the Los Angeles Chargers at Estadio Azteca.

Despite managing only 109 yards in the first half, the Chiefs fended off a last-gasp drive by the Chargers when safety Daniel Sorenson picked off Philip Rivers in the end zone with 18 seconds remaining.

It was Rivers’ fourth interception and moved Kansas City, which entered the game tied with the Oakland Raiders at 6-4, back in first all alone heading into its bye week.

Mahomes finished the game 19 of 32 for 182 yards, which is the fewest yards he’s had in a full game during his career, with a touchdown and an interception.

But it was Mahomes’ 23-yard touchdown to tight end Travis Kelce that proved to be the difference — along with all those Rivers interceptions.

Kansas City led 10-9 at halftime and took control with back-to-back touchdown drives to open the second half.

Running back Darrel Williams, who got the bulk of the work after both Damien Williams (rib) and LeSean McCoy (concussion) left the game, scored on a 6-yard run for a 17-9 lead on the third quarter’s first drive.

Next came Kelce’s touchdown for a 24-9 lead.

Rivers threw his only touchdown on the next drive, a 7-yard strike to Keenan Allen followed by a two-point conversion to tight end Hunter Henry.

The Chiefs’ defense allowed only 24 yards on 10 plays during the Chargers’ next three drives, which ended with two punts and Rashad Fenton’s first career interception.

Kansas City wasn’t able to run out the clock on Los Angeles, setting up a dramatic 11-play drive that covered 77 yards before Sorenson’s pick sealed the win.

The team said Hill, who missed four games earlier this season after injuring his collarbone in the season opener, was questionable to return with a hamstring injury.

Tyreek Hill is questionable to return with a hamstring injury. pic.twitter.com/rzOfGVVFXF

Hill had been playing his best football with 17 catches for 297 yards and two touchdowns in the last two weeks. He was one of two starters to go down in the opening quarter.

Center Austin Reiter also left the game to be evaluated for a concussion, the Chiefs said on Twitter.

Austin Reiter is being evaluated for a concussion. pic.twitter.com/Rgpxhaxi5R

The Chiefs got back two starters on the offensive line, left tackle Eric Fisher and right guard Laurent Duvernary-Tardif, marking the first time the starting line was intact since earlier in week two.

Reiter missed two drives before returning to the field late in the second quarter.

Kansas City had the only touchdown in the first half.

The Chiefs led despite being outgained 312-109 and getting doubled up in time of possession.

Patrick Mahomes had the worst first half of his career, going 8 of 15 for 63 yards with an interception.

Kansas City trailed 3-0 after the first quarter, but it could have been worse.

Another Philip Rivers interception set up the Chiefs’ first touchdown despite being outgained 181-62 at that point.