A's walk off Royals in the 11th inning 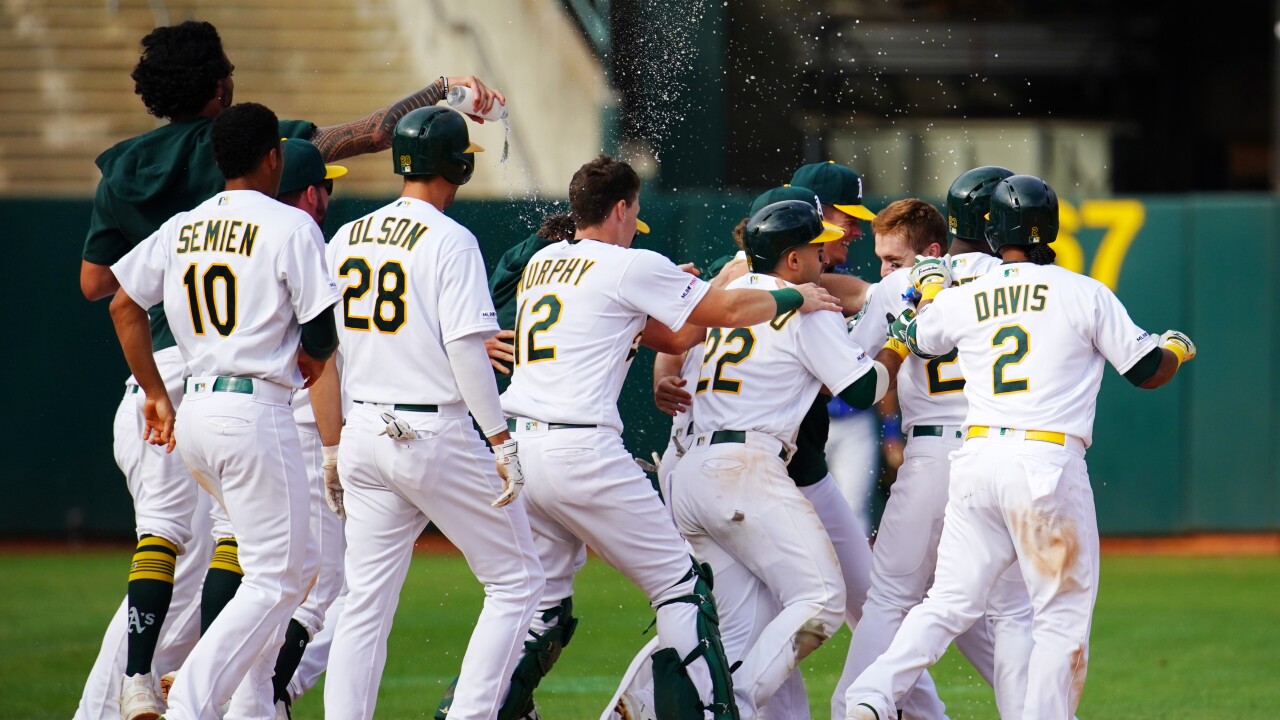 OAKLAND, Calif. — Mark Canha hit an RBI double with two outs in the 11th inning and the Oakland Athletics edged the Kansas City Royals 1-0 Wednesday to hold their lead atop the AL wild-card race.

The Athletics, who have won seven of eight, began the day two games ahead of Tampa Bay for the top wild-card spot. Cleveland was a half-game behind the Rays.

Starters Homer Bailey of the A's and Danny Duffy of the Royals each pitched seven sharp innings. Bailey, who was traded from Kansas City to Oakland in July, allowed three hits and struck out 11 while Duffy gave up two hits and fanned six.

J.B. Wendelken (3-1) pitched 1 1/3 scoreless innings for the win. He struck out Jorge Soler with the bases loaded and two outs in the 11th.

Bailey is 4-0 with a 1.88 ERA over his last seven starts. The Royals struck out 19 times and are three defeats away from reaching the 100-loss plateau with nine games left.

A's left fielder Chad Pinder saved at least a run with a diving catch on a flarer off Ryan O'Hearn's bat with runners at first and second with two outs in the seventh to keep the game scoreless.

Royals left fielder Gordon crashed into the wall making a running catch to rob Canha of extra bases with one out in the seventh.

Royals: RHP Jakob Junis has been shut down for the remainder of the season due to concerns about his workload, manager Ned Yost said. Junis has pitched 175 1/3 innings in 31 starts. . LHP Eric Skoglund will take Junis' spot in the rotation.

Athletics: RHP Mike Fiers, who experienced nerve irritation in his right arm in his last start, will take his regular turn in the rotation on Friday, when Oakland opens a three-game series against Texas. Fiers lasted just 1 2/3 innings on Sept. 14 against the Rangers in Arlington. He has experienced the injury intermittently over the past two seasons. Fiers had MRI earlier this week and was cleared after throwing a bullpen session without issues, manager Bob Melvin said. "We'll continue to monitor him, but this has kind of popped up for before, hasn't been an issue for him later on," Melvin said. "He's pretty routine-oriented, so we'll keep him on schedule."

Athletics: Fiers (14-4, 4.09 ERA) will pitch Friday's series opener against the Texas Rangers. Oakland's most reliable starter for most of the season has given up 12 earned runs in 2 2/3 innings over his last two starts and has an 18.78 ERA in three September starts (16 earned runs, 7.2 innings pitched).