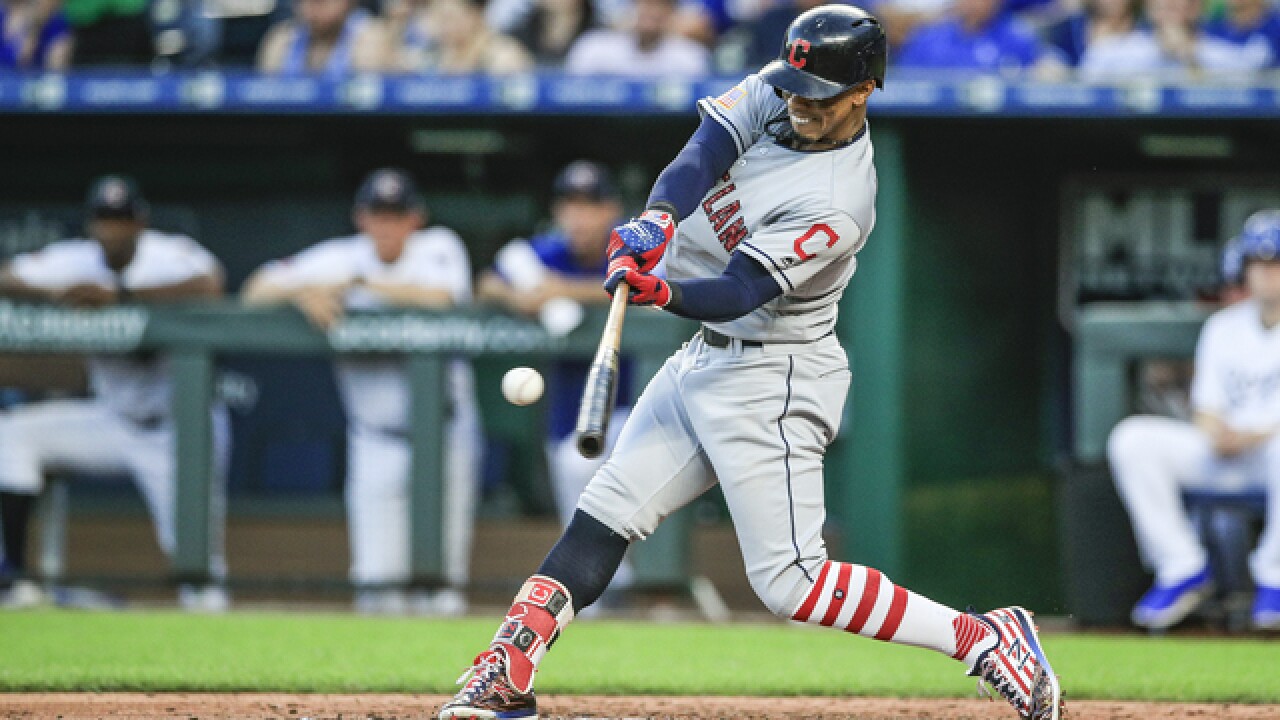 Francisco Lindor homered twice, including a grand slam, and finished with a career-high seven RBIs as the Cleveland Indians beat the Kansas City Royals 9-3 on Monday night.

Corey Kluber (12-4), who failed to make it out of the second inning in his previous start at St. Louis, gave up two runs in the first, but little after that. He allowed three runs and seven hits, walked none and struck out five over six innings.

Lindor homered in the fourth after Yan Gomes singled and Jakob Junis hit Tyler Naquin and Rajai Davis with pitches. He added a three-run homer in the sixth to finish Junis' evening. Lindor has 17 home runs and 54 RBIs in 54 games against the Royals.

Junis (5-10) has lost his last seven starts and is tied with teammate Jason Hammel for most losses in the American League. He has yielded a major league-high 24 home runs, including 12 in his last five starts over 27 innings.

Whit Merrifield homered on Kluber's third pitch for his fourth career leadoff home run. Salvador Perez singled home Mike Moustakas, who had doubled, in an 11-pitch at-bat for the other Kansas City run in the first.

Jorge Bonifacio logged his first RBI of the season in the Kansas City sixth after being suspended the first 80 games for taking a performance enhancing drug.

The Royals have lost 23 of their last 28 games.  They are tied with the Baltimore Orioles for the most losses in the majors with 54.  They scored four runs or fewer for the 23rd time in the last 24 games.

The Royals signed right-hander Jackson Kowar, a first-round compensation selection and the 33rd overall pick, to a $2.118.700 signing bonus.  He went 10-5 with a 3.04 ERA as a Florida junior.

LeBron James has left the Cleveland Cavaliers to join the Los Angeles Lakers.  "If someone gave me $154 million I'd probably go somewhere too," Indians manager Terry Francona said. "He did what he said he was going to do. He got them a championship. When you're a free agent, you've earned that right. I will miss him, because I loved going to games when he played. It's hard to begrudge somebody. He earned it."

Indians: RF Lonnie Chisenhall was a late scratch with a strained left calf. ... RHP Danny Salazar underwent season-ending shoulder surgery in Dallas. "It just kind of came to a point," Francona said. "That's the last option. You try everything else before you go into somebody's shoulder. The good side is there was no structural (damage). The rotator cuff was good. They cleaned him out. It's a shame we lost him for the whole year."

Indians: RHP Shane Bieber is 3-0 with a 2.22 ERA in his first four big league starts.

Royals: LHP Danny Duffy is winless in six home starts this season, going 0-3 with a 6.32 ERA.