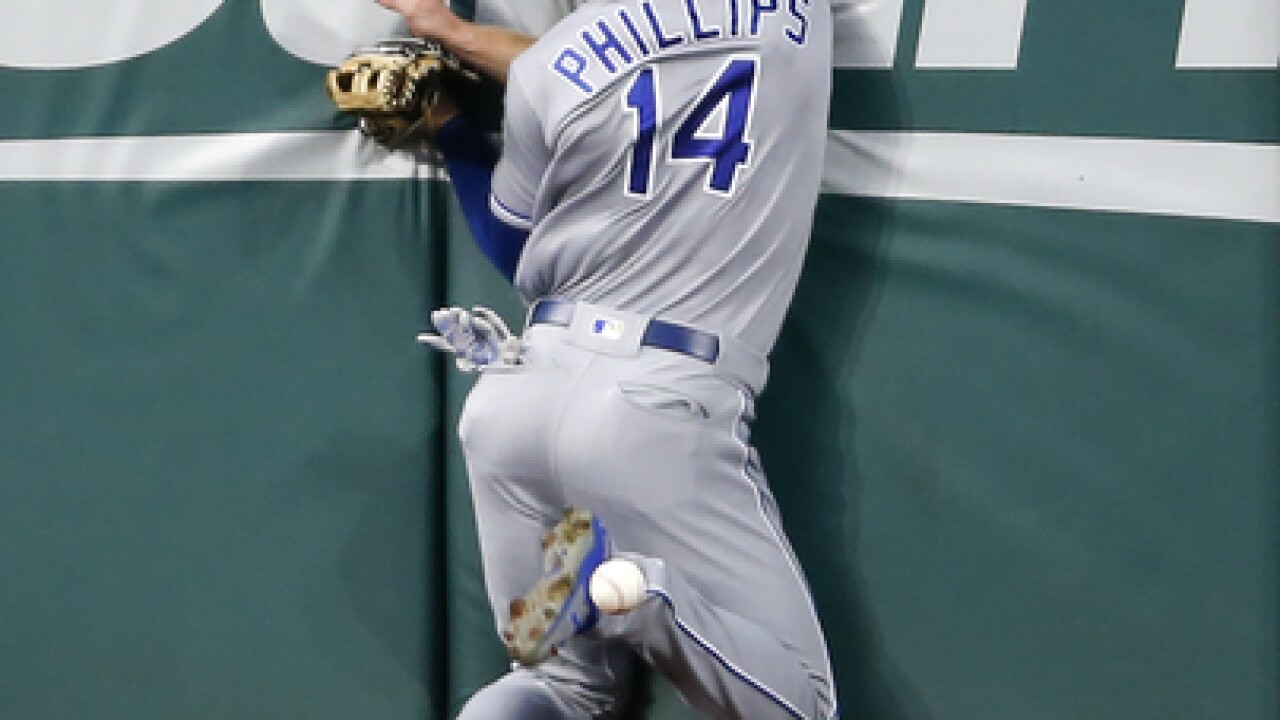 Copyright 2018 Scripps Media, Inc. All rights reserved. This material may not be published, broadcast, rewritten, or redistributed.
Ron Schwane
<p>CLEVELAND, OH - SEPTEMBER 04: Brett Phillips #14 of the Kansas City Royals crashes into the wall attempting to catch a one run double by Jose Ramirez #11 of the Cleveland Indians during the second inning at Progressive Field on September 4, 2018 in Cleveland, Ohio. (Photo by Ron Schwane/Getty Images)</p>

Mike Clevinger struck out 10, Francisco Lindor hit another leadoff homer and the Cleveland Indians moved closer to their third straight AL Central title with a 9-3 win over the Kansas City Royals on Tuesday night.

The Indians ended a three-game losing streak and reduced their magic number for clinching another division title to 11.

Not only did the Royals have their season-high winning streak stopped at six, but they lost starting pitcher Danny Duffy and rookie right fielder Brett Phillips to injuries.

Following the game, Duffy said his season is over. He was on the disabled list from Aug. 13-23 with shoulder issues.

"What we've been doing for a while is telling me to knock it off," Duffy said. "I tried to kind of go out there and grind it out. It's unfortunate the way it played out, but it's not from lack of trying."

Staked to a 6-0 lead after two innings, Clevinger (11-7) allowed just three hits in six innings and remained unbeaten in his last seven starts. The right-hander, who could have a big role for the Indians in October, had a little more velocity on his fastball and struck out six of nine in one dominant stretch.

Lindor connected for his 31st homer in the first against Duffy (8-12), who left moments later with a sore left shoulder.

After the Indians lost Monday night, Lindor talked about the Indians being flat and needing a spark.

The All-Star shortstop provided an early one with his sixth leadoff homer -- one shy of the club record set by Grady Sizemore in 2008 -- as the Indians jumped to a 3-0 lead on Duffy.

Diaz picked up an RBI on a fielder's choice and Kipnis, who is moving from second base to center field, singled home a run in the inning before Duffy was removed after 26 pitches. The left-hander underwent Tommy John surgery in 2012.

CRASH TEST
Phillips bruised his right shoulder in a scary collision with the padded outfield wall in the second inning.

Breaking back on Ramirez's drive, Phillips just missed making a catch before barreling full-speed into the wall. His torso twisted awkwardly and he crumpled onto the warning track. His teammates and a trainer rushed to Phillips, who got to his feet and remained in the game after being examined.

Phillips was removed the next inning. He was acquired in July from Milwaukee in the trade for third baseman Mike Moustakas.

MOVING TIME
Kipnis isn't thrilled about having to change positions, but he's willing to do it as long as Josh Donaldson is healthy.

The Indians acquired Donaldson -- the 2015 AL MVP -- in a trade with Toronto, and once activated from the disabled list, he'll take over at third with Ramirez going to second and Kipnis heading to the outfield.

Kipnis did the same thing a year ago.

"Does it take a little wind out of my sails?" he said. "A little bit. But not enough to get me to stop working, stop competing."

TRAINER'S ROOM
Royals: C Salvador Perez (sprained left thumb) was out of the lineup for the sixth straight game. The six-time All-Star was injured Aug. 28.

Indians: LHP Andrew Miller is expected to throw a bullpen session on Thursday in Toronto as he recovers from shoulder soreness that landed him on the disabled list. Miller has been on the DL three times this season, but the reliever isn't concerned about his latest issue which he has previously dealt with in spring training. The former All-Star left-hander has also been out with hamstring and knee injuries.

UP NEXT
Corey Kluber tries to become the majors' first 18-game winner as the Indians conclude their three-game series with the Royals, who will start Brad Keller.