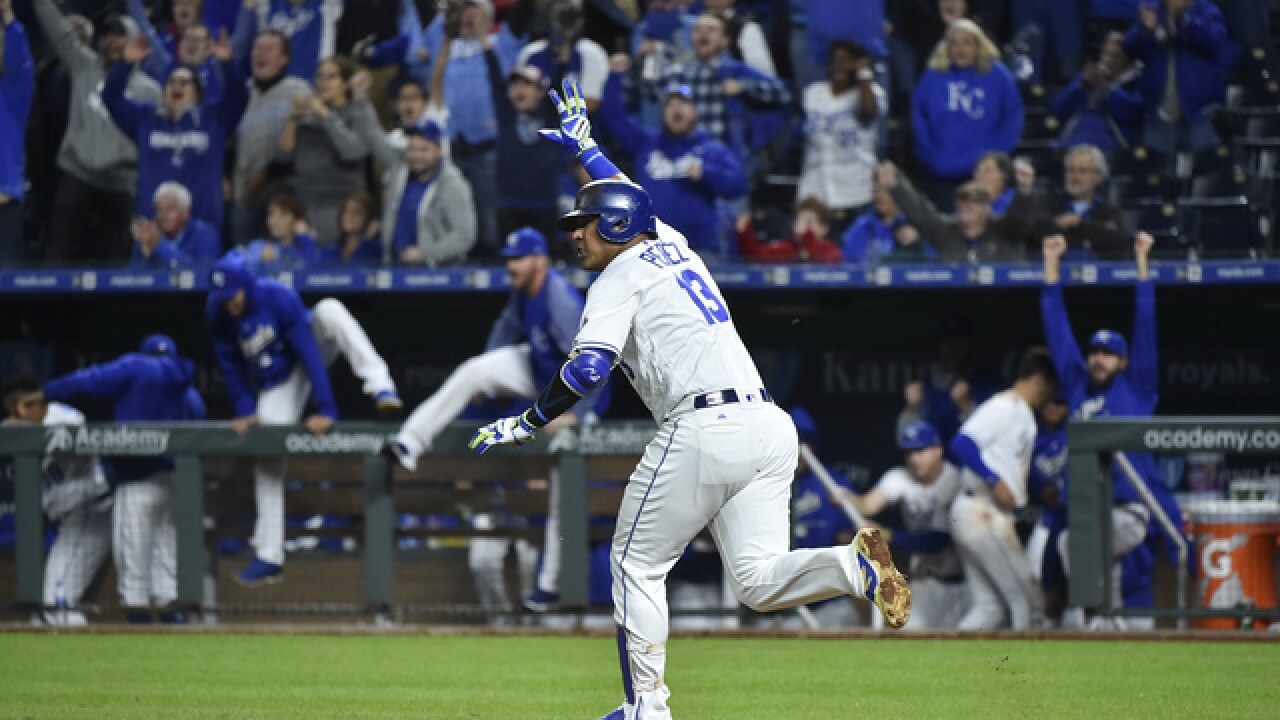 Copyright 2018 Scripps Media, Inc. All rights reserved. This material may not be published, broadcast, rewritten, or redistributed.
Ed Zurga
<p>KANSAS CITY, MO - SEPTEMBER 27: Salvador Perez #13 of the Kansas City Royals celebrates his walk-off RBI single in the 10th inning against the Cleveland Indians at Kauffman Stadium on September 27, 2018 in Kansas City, Missouri. The Royals won 2-1. (Photo by Ed Zurga/Getty Images)</p>

Salvador Perez slashed a two-out RBI single in the 10th inning to give the Kansas City Royals a 2-1 victory over the Cleveland Indians on Thursday night.

Neil Ramirez (0-3) retired the first two hitters in the 10th before he walked Aldaberto Mondesi, who stole second and third to reach 30 steals on the season. Alex Gordon also walked before Perez hit Ramirez's first pitch into left field to score Mondesi for the walk-off win.

The AL Central champion Indians (89-70) got their only run in the first. Francisco Lindor led off with a single, took second on a botched pickup attempt and went to third on a balk by Royals starter Glenn Sparkman. Lindor scored on Jose Ramirez's one-out sacrifice fly.

Josh Tomlin went 4 2/3 innings for the Indians, allowing Mondesi's homer in the third.

The Indians had runners at second and third with two out in the eighth when Yandy Diaz chopped a slow roller between third baseman Hunter Dozier and shortstop Mondesi, who made a quick scoop and an off-balance throw to get Diaz.

HITS LEADER
The Royals' Whit Merrifield had two hits and moved into the major league lead with 188, one ahead of Atlanta's Freddie Freeman. Merrifield has 53 multi-hit games on the season.

Indians: INF Erik Gonzalez entered the concussion protocol after getting hit in the head by a pitch against the White Sox on Wednesday. Manager Terry Francona said Gonzalez experienced some nausea after getting beaned, but "is doing much, much better." Gonzalez traveled with the team but there is no timetable for his return. ... 1B Yonder Alonso got the day off. ... Francona said OF Michael Brantley, who left Tuesday's game after fouling a pitch off his right calf and then returned to the lineup Wednesday, sat for his regular day off and has no lingering effects.

UP NEXT
Indians RHP Mike Clevinger (12-8, 3.07 ERA) will make his final start of the regular season opposite Royals RHP Ian Kennedy (3-8, 4.59) as Francona gets his rotation set for the playoffs.