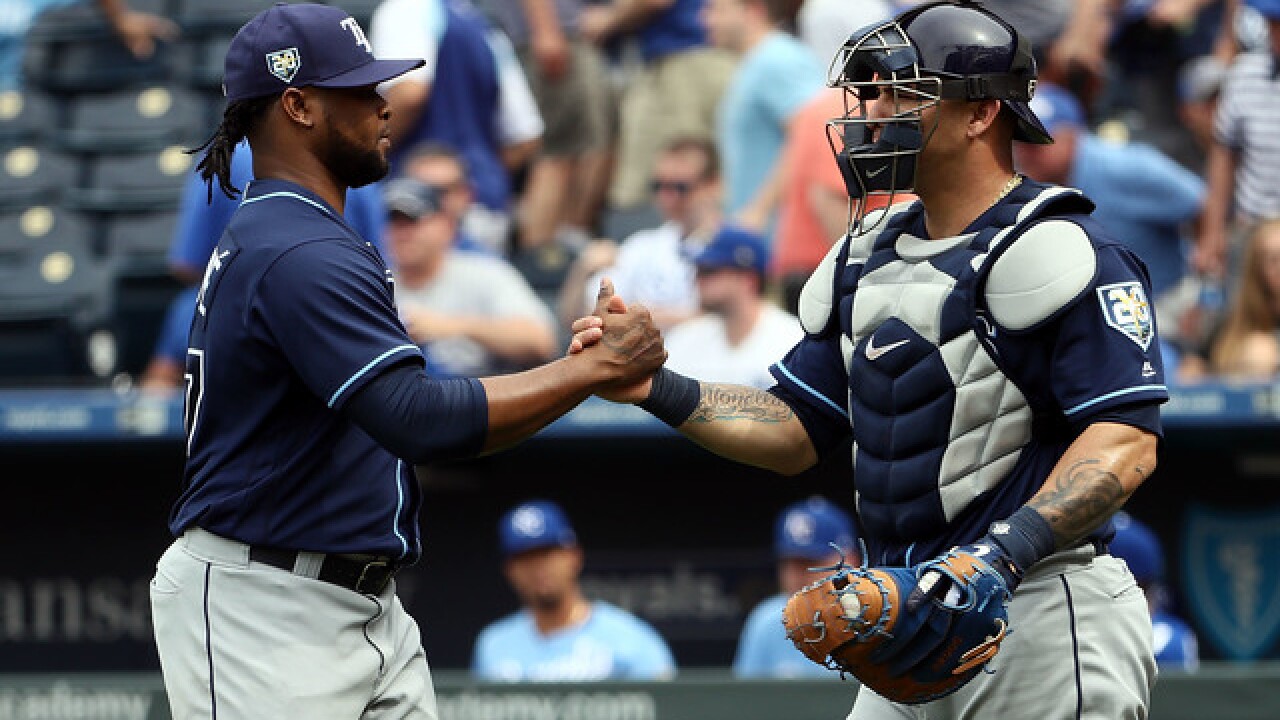 Copyright 2018 Scripps Media, Inc. All rights reserved. This material may not be published, broadcast, rewritten, or redistributed.
Jamie Squire
<p>KANSAS CITY, MO - MAY 16: Closer Alex Colome #37 of the Tampa Bay Rays is congratulated by catcher Wilson Ramos #40 after the Rays defeated the Kansas City Royals 5-3- to win the game at Kauffman Stadium on May 16, 2018 in Kansas City, Missouri. (Photo by Jamie Squire/Getty Images)</p>

C.J. Cron is playing well heading into a series against his former team.

Cron homered and scored three runs, and the Tampa Bay Rays beat Kansas City 5-3 on Wednesday to complete a three-game sweep of the woeful Royals.

"He produced," Rays manager Kevin Cash said. "I know the home runs are great and he's done that throughout his career, but the at-bats he's having, finding ways to get hits, and then he did it on the bases, too. He's helped us a lot. I'm glad he's getting hot at the right time to go into Anaheim."

The Rays acquired Cron in a February trade with the Angels, where his plate-appearances were sporadic playing behind Albert Pujols. The Rays open a four-game Thursday at Anaheim.

"Just being in the lineup is nice," Cron said. "I'm able to make the necessary adjustments you need to make to be successful at this level. We're doing alright and we've been winning some games. It's been good."

Cron extended his on-base streak to 22 games when he was hit by a pitch from Jason Hammel (0-5) in a three-run first that included Brad Miller's RBI groundout and Adeiny Hechavarria's two-run single.

Cron homered leading off the third, then singled in the fifth and scored on Wilson Ramos' double-play grounder for a 5-1 lead. Cron is hitting .319 with 19 RBIs in the 22-game streak.  He has 10 of the Rays' 37 homers.

Tampa Bay had lost six of seven coming in but swept the Royals for the first time since four games from Aug. 8-11, 2011. The Rays had not swept a series in Kansas City since three games from July 17-19, 2009.

Staked to a 4-0 lead, Rays starter Jake Faria allowed three runs, four hits and four walks in 4 1/3 innings. He gave up sacrifice flies to Alcides Escobar in the fourth and Mike Moustakas in the fifth, an inning that also included Jorge Soler's RBI double.

"Driese is probably one of the key reasons we were able to win that ballgame," Faria said. "Three fantastic innings, if he doesn't do that, who knows what would happen. He's a key reason we won."

"Beyond frustration, right now. It's just unacceptable, three spots every first inning," Hammel said. "We put their heads under water every single day, and it's tough to battle back every single game out. I'm obviously not very proud of the effort. I've just got to get better."

Kansas City has allowed runs in the first inning of six of the past seven games.

"It seems like the first inning hasn't been very good for us," Royals manager Ned Yost said. "You take away some of those first innings and our pitching has been pretty darn good."

LHP Jonny Venters went 2,096 days between victories. He picked up the win Tuesday in relief, his first since Aug. 17, 2012, while with Atlanta. There were 1,058 other pitchers who got wins between his two victories. "Every time I hear numbers like that, it's funny to sit back and think about it," said Venters, who has had three Tommy John surgeries and missed nearly four seasons.

Rays: OF Carlos Gomez (right groin strain) was placed on the 10-day DL. ... 3B Matt Duffy (right hamstring tightness) did not play. "I think we're probably going to play it a little safer," Duffy said. "If I need one extra day, the first day in Anaheim, I don't think that's out of the question, to take two days off and go from there."

Royals: INF Cheslor Cuthbert (back spasms) was not in the lineup for the second straight day. ... RHP Nathan Karns (right elbow inflammation) has resumed a throwing program after being shut down for several days.

Rays: RHP Chris Archer (2-3) is to start Thursday at the Los Angeles Angels. He gave up three homers and six runs in a loss Saturday at Baltimore and is 5-1 with a 2.55 ERA in seven starts against the Angels.

Royals: RHP Jakob Junis (4-3) is to start Friday in the opener of a three-game series against the visiting New York Yankees.