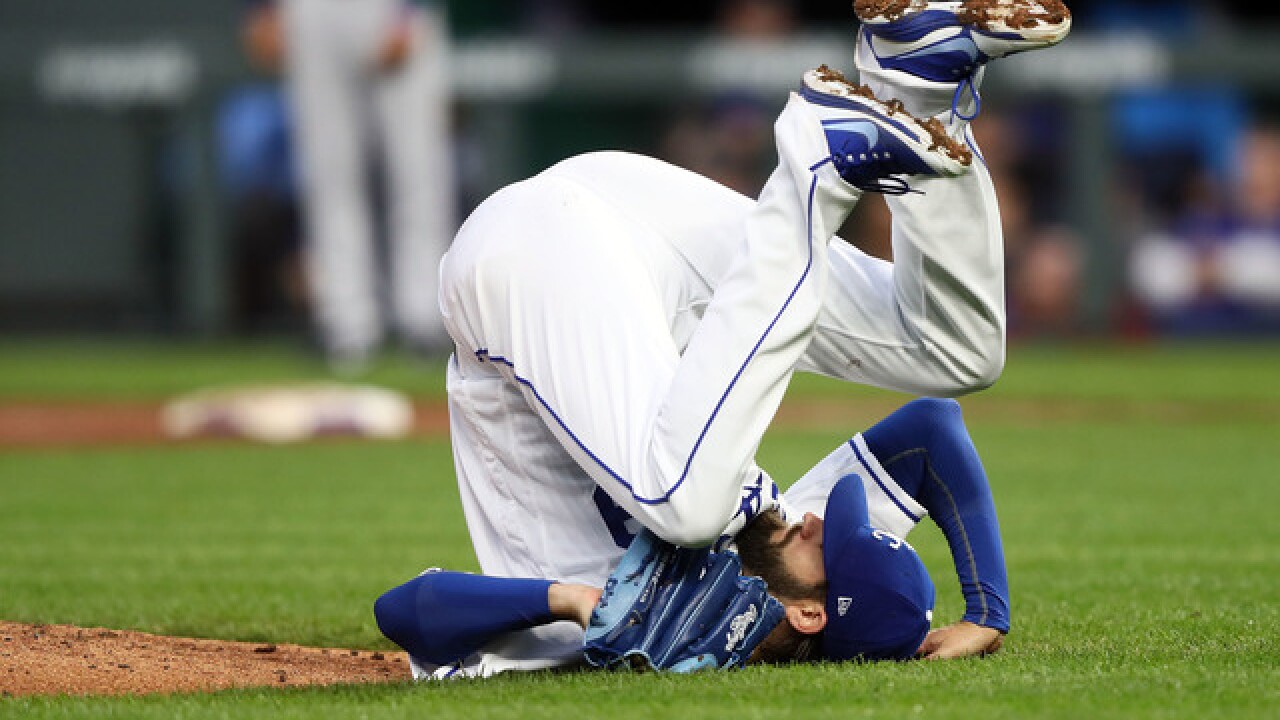 Copyright 2018 Scripps Media, Inc. All rights reserved. This material may not be published, broadcast, rewritten, or redistributed.
Jamie Squire
<p>KANSAS CITY, MO - APRIL 25: Starting pitcher Jason Hammel #39 of the Kansas City Royals rolls over after being hit by the ball off the bat of Lorenzo Cain #6 of the Milwaukee Brewers during the 3rd inning of the game at Kauffman Stadium on April 25, 2018 in Kansas City, Missouri. (Photo by Jamie Squire/Getty Images)</p>

Jhoulys Chacin efficiently mowed through the Kansas City lineup, Milwaukee manufactured four runs in the fourth inning and the Brewers went on to beat the Royals 6-2 on Wednesday night for their eighth consecutive victory.

Chacin (2-1) did not allow a hit until two outs in the fourth. The veteran right-hander wound up allowing two runs on four hits and a walk while working into the sixth inning.

The Brewers scored all they needed off Jason Hamel (0-2) in the fourth inning on two hits, a walk, an error and a pair of sacrifice flies. Only three of the runs were earned after outfielder Jorge Soler dropped a would-be flyout to the groans of about 5,000 fans that braved the cold, wet weather.

The winning streak for Milwaukee matches its longest since June and July 2015, when the club also won eight straight. The run began with two wins over Cincinnati and included a four-game sweep of Miami before taking both midweek interleague matchups with the Royals.

Chacin tossed six shutout innings in beating the Marlins last week, and he was nearly as dominant Wednesday night. He held the Royals hitless until Mike Moustakas went deep with two out in the fourth, got the next out and then left a pair of runners aboard in the fifth inning.

The Royals scratched out another run on Salvador Perez's fielder's choice before Brewers manager Craig Counsell lifted Chacin after 64 pitches. Dan Jennings got the final out of the sixth.

Hammel allowed five hits and a pair of walks over 6 2/3 innings. Eric Stout finished the seventh, then coughed up two runs in the eighth to cap his major league debut.

Brewers 1B Eric Thames went on the disabled list Wednesday after an MRI exam revealed a torn ligament in his left thumb. The slugger was hurt fielding a grounder on Tuesday night and left after the eighth inning. He'll return to Milwaukee on Thursday to see team doctors and will likely have surgery soon. The Brewers hope to have him back in a couple of months.

Royals: The swelling in the right foot of RHP Ian Kennedy was down after he took a liner off it in the series opener. Kennedy left after the third inning Tuesday night but could make his next start Sunday.

Kansas City plays the White Sox five times in the next four days, including a day-night doubleheader on Saturday. RHP Jakob Junis will start the series opener Thursday night.

Milwaukee RHP Chase Anderson will take the mound Thursday night against the Cubs in Chicago. After four games there, the Brewers will conclude a nine-game trip with three in Cincinnati.