Royals give up lead and lose series finale for Twins, 9-6 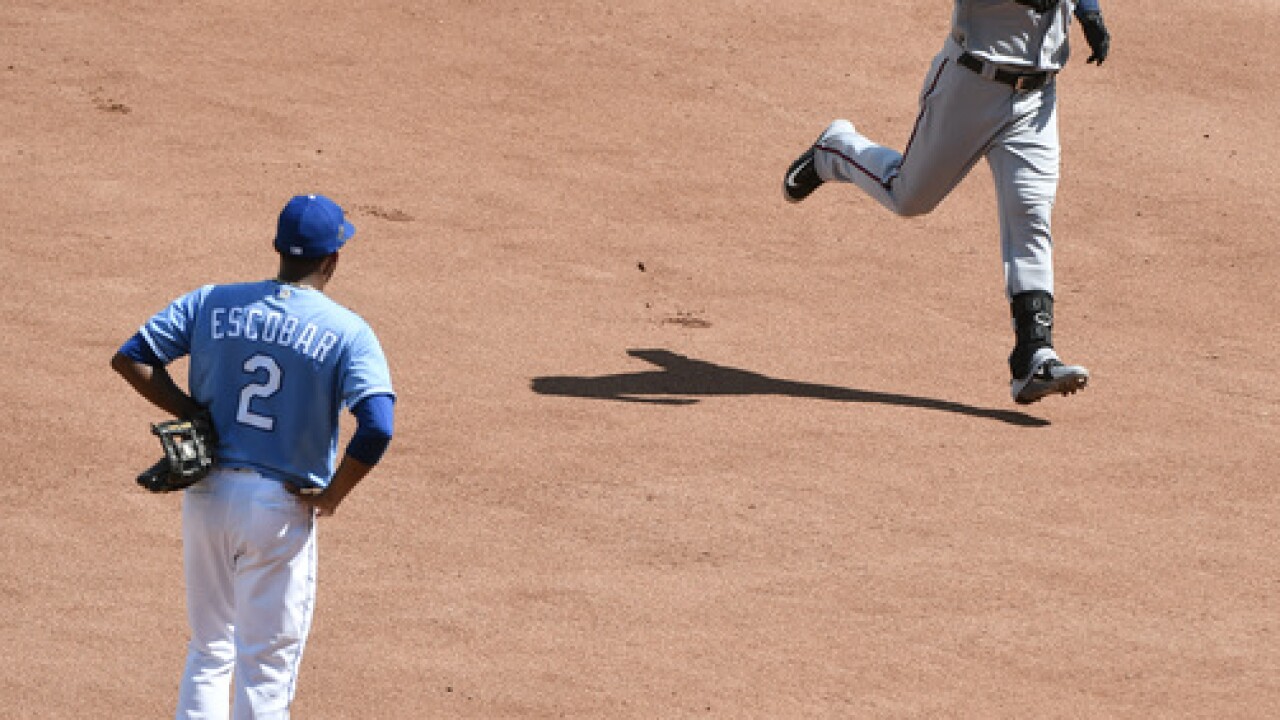 Copyright 2018 Scripps Media, Inc. All rights reserved. This material may not be published, broadcast, rewritten, or redistributed.
Ed Zurga
<p>KANSAS CITY, MO - SEPTEMBER 16: Tyler Austin #31 of the Minnesota Twins runs the bases after hitting a home run as Alcides Escobar #2 of the Kansas City Royals looks on in the fourth inning at Kauffman Stadium on September 16, 2018 in Kansas City, Missouri. (Photo by Ed Zurga/Getty Images)</p>

There was little for Tyler Austin to be upset about as he headed to the bus on Sunday.

The Twins' first baseman had hit one of their four home runs in a 9-6 win over the Kansas City Royals. He had escaped unscathed after making a spectacular catch while flipping into the dugout down the first-base line and, perhaps most importantly, he didn't have to dress up in one of the ridiculous horse-and-jockey costumes that were awaiting his rookie teammates in their locker.

Instead, Austin was able to enjoy all of it -- right down to the rookie hazing ritual -- after the Twins managed to avoid a four-game sweep and an ignominious start to their final trip this season.

Max Kepler, Johnny Field and Jorge Polanco also went deep for the Twins, who had a season-high 18 hits and got a gritty effort by Kyle Gibson (8-13) to cool off the red-hot Royals.

"You always have something to play for," said Gibson, who lasted into the seventh to end a four-start losing streak, despite allowing five runs and 11 hits. "When teams start giving up and throwing it in, they're only doing disrespecting those around you."

So that's why Austin was willing to go head-over-heels into an empty dugout, and while the rest of the Twins were there to pick him right back up with a pat on his back.

"I don't think he cares where fences are," Twins manager Paul Molitor said. "He kind of caught it as he got there and unfortunately there were no people there. He took a pretty hard fall but he's OK."

Jerry Vasto (0-1) allowed one run on three hits to take the loss in relief.

Ryan O'Hearn and Rosell Herrera staked Kansas City to a 2-0 lead with back-to-back run-scoring doubles in the first, but Minnesota slowly chipped away in building a 5-2 lead in the fourth.

Polanco began the comeback with an RBI single, but it was Kepler's homer off Jakob Junis -- on the pitcher's 26th birthday, no less -- and back-to-back shots by Austin and Field that turned the game.

It was the sixth time Minnesota has gone back-to-back this season.

Brian Goodwin answered for Kansas City with an RBI single in the bottom of the fourth, and two-run shot by Adalberto Mondesi in the fifth allowed Kansas City to pull even again. But Polanco's homer off Brian Flynn leading off the sixth gave Minnesota the lead back for good.

"It was a good homestand. I'm glad we're playing better for our fans," said Royals manager Ned Yost, whose club has won five straight series. "We haven't given them much to cheer for all summer long, yet they still cheer for us. So, to have some success here at the end of the season makes me feel a little bit better."

RIDER UP
The Twins rookies poured out of the dugout long after the final pitch and proceeded to run around Kauffman Stadium in what Gibson dubbed the Kentucky Derby. They'll have to don their costumes again to run the Preakness after their final game in Detroit, then do it one more time to run the Belmont Stakes when they conclude their final road series in Oakland next weekend.

EWW, GROSS
Twins pitcher Zack Littell left Saturday's game after developing blood blister on a finger of his pitching hand. "It's good," he said before Sunday's game. "Came in this morning and let them drain it again. Letting it dry up and then take a day or two off catch, then get back at it."

EASY WITH EDDIE
Eddie Rosario (hamstring) was the DH on Sunday, and Twins manager Paul Molitor said he's being cautious with putting him back in the outfield. "I'm hoping he gets there. I don't think he's feeling that risk is worthwhile," Molitor said. "As it's going, I'm getting him in there most days as DH."

TRAINER'S ROOM
Twins: C Mitch Garver (concussion) was feeling better Sunday, though it's still unclear when he will be cleared to play. "He's got more energy," Molitor said. "There's signs he's getting it behind him." ... 3B Miguel Sano (bruised leg) missed his 10th straight game. "He said he's doing better," Molitor said. "He told me he wanted to try to play sometime in the Detroit series."

UP NEXT
The Twins continue their 10-game trip when they visit Detroit for three games beginning Monday night. The Royals' final road trip also begins Monday night, when RHP Brad Keller (8-6, 3.04) is on the mound for the first of three games in Pittsburgh.