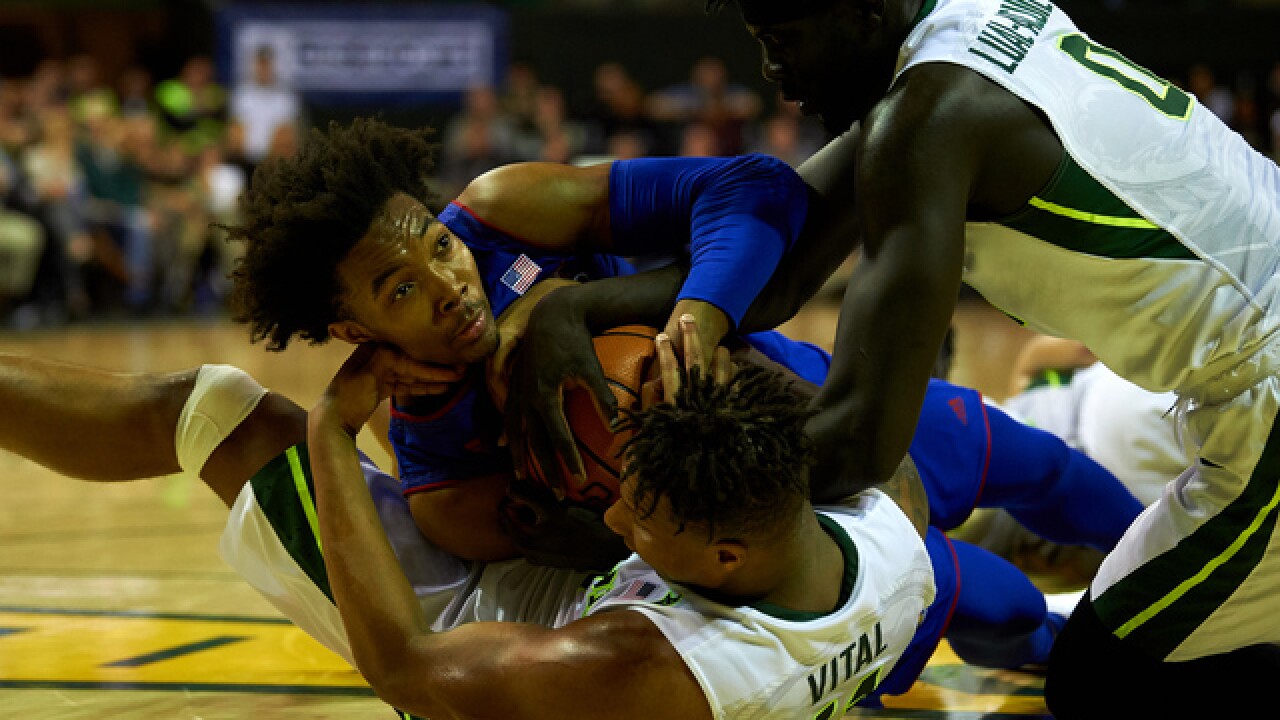 Copyright 2018 Scripps Media, Inc. All rights reserved. This material may not be published, broadcast, rewritten, or redistributed.
Cooper Neill
<p>WACO, TX - FEBRUARY 10: Devonte' Graham #4 of the Kansas Jayhawks dives after a lose ball against Mark Vital #11 (bottom) and Jo Lual-Acuil Jr. #0 (top) of the Baylor Bears during the second half at the Ferrell Center on February 10, 2018 in Waco, Texas. (Photo by Cooper Neill/Getty Images)</p>

(AP) — Manu Lecomte took a deep 3-pointer, and then slowly took a few steps backward toward the other goal while watching the ball go through the net. The point guard then made another long shot for Baylor’s next basket.

The consecutive 3s were part of eight straight points by Lecomte after No. 10 Kansas had pulled within a basket, and the Bears went on an 80-64 victory over the Jayhawks — a team they hadn’t beaten in five years.

“Everybody was playing really well, so I was kind of out there being a facilitator for everybody. And then when we needed a shot up, I took them,” said Lecomte, who finished with 18 points on 6-of-10 shooting.

“Those two 3s he made were probably 27, 28 feet. He’s just a good player, and jumped up and made a couple of big-time shots,” Kansas coach Bill Self said. “They were just clutch plays.”

The Jayhawks (19-6, 8-4 Big 12) trailed 30-20 at halftime after having more turnovers (nine) than made field goals (seven) before the break. They were down by as many as 13 points after that but closed to 58-56 with 7:14 left after consecutive jumpers by Lagerald Vick.

“They were doing a good job of running him off the baseline screens and stuff like that, and kind of lost sight of him,” Kansas guard Devonte Graham said.

Jo Lual-Acuil had 19 points for Baylor, which has won three in a row after a four-game losing streak. Nuni Omot scored 17 and Jake Lindsey 11. Mark Vital grabbed 11 rebounds and blocked three shots .

“Each game is huge now because we had dug ourselves such a hole,” coach Scott Drew said. “The great thing, I’ve said this all along, in the Big 12 there is no bad loss and there’s only quality win opportunities.”

Graham had 14 of his 23 points after halftime, while reserve Malik Newman finished with 14 for Kansas.

“We were obviously better three weeks ago than we’re playing right now,” Self said.

Baylor ended an 11-game losing streak in the series against the Jayhawks, including a 70-67 loss in Lawrence on Jan. 20. The Bears need to keep winning games to get back in position for a fifth straight NCAA Tournament berth that looked as if it was slipping out reach when they lost six of seven to end January.

Kansas’ Svi Mykhailiuk, who came in averaging 16.4 points a game, sustained a black eye when he was hit in the face by the hand of teammate Marcus Garrett while the two were shooting during pregame warmups. Mykhailiuk finished with two points on 1-of-8 shooting (0 of 6 on 3s). He came in a 46-percent shooter from long range.

“He was messed up. He was icing it the whole time,” Self said. “I think he made eight 3s in a row yesterday when we were scrimmaging, so I thought he may come out and be on fire, and he was never able to get on track.”

PROBLEMS INSIDE AND OUT

Kansas was only 6 of 31 (19 percent) on 3-pointers, with Graham and Newman a combined 6 of 20. Along with the issues deep, post players Udoka Azubuike and Mitch Lightfoot were both in foul trouble throughout the game. They played a combined 41 minutes.

Kansas is going to fall out of the top 10 when the new poll comes out Monday. The Jayhawks also could be out of the Big 12 lead, depending on the outcome of No. 7 Texas Tech’s game at Kansas State on Saturday night.

Kansas is on the road again Tuesday night at Iowa State before consecutive home games against No. 19 West Virginia and No. 17 Oklahoma.

Baylor has a quick turnaround and a short trip, about 100 miles down I-35, to play at Texas on Monday night.