Duffy gets 5th win of the season 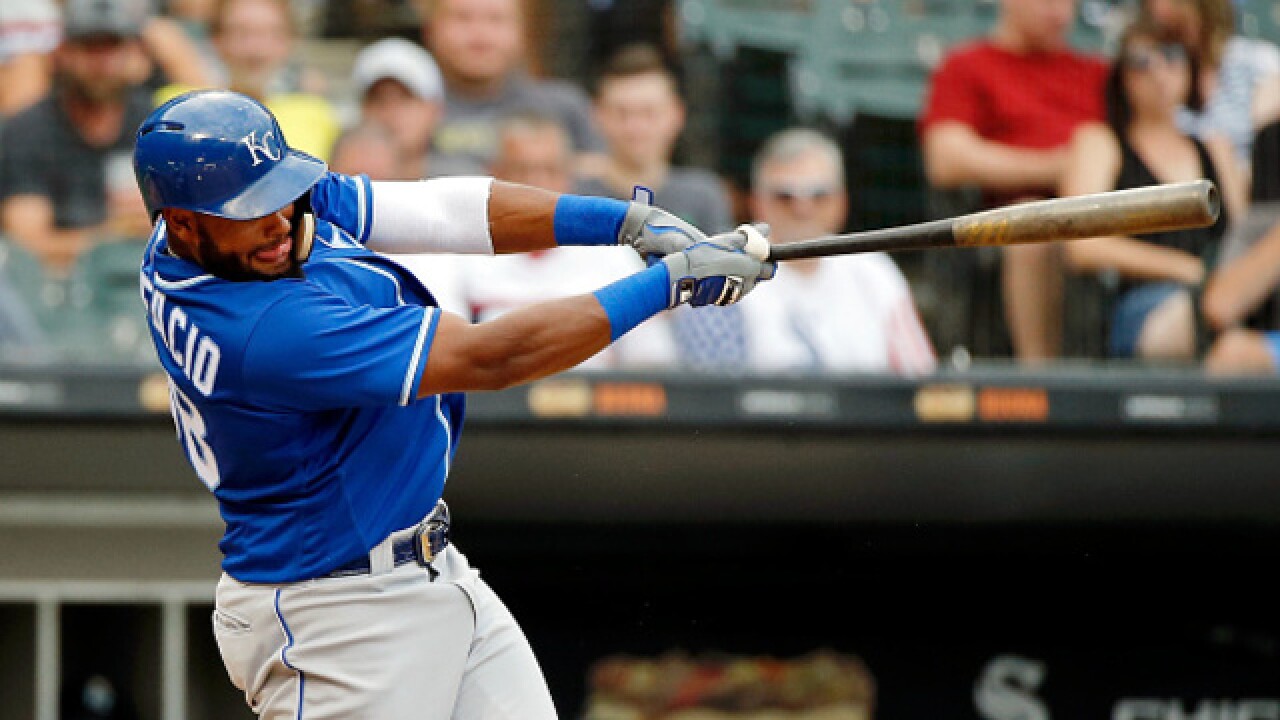 Copyright 2018 Scripps Media, Inc. All rights reserved. This material may not be published, broadcast, rewritten, or redistributed.
Jon Durr
<p>CHICAGO, IL - JULY 14: Jorge Bonifacio #38 of the Kansas City Royals hits an RBI triple against the Chicago White Sox during the fifth inning at Guaranteed Rate Field on July 14, 2018 in Chicago, Illinois. (Photo by Jon Durr/Getty Images)</p>

Jorge Bonifacio served his suspension for testing positive for a performance-enhancing substance, and he just wants to move on.

One swing at a time.

Bonifacio hit a two-run drive for his first homer since rejoining Kansas City late last month, helping the Royals beat the Chicago White Sox 5-0 on Saturday for just their second win in July.

"I've been feeling pretty good lately," he said. "I just want to keep working on that and keep swinging good."

Bonifacio connected after Whit Merrifield led off the game with a single, sending a drive into the home bullpen in left. He also drove in Paulo Orlandowith a triple in the fifth, providing more than enough support for Danny Duffyin the left-hander's second straight scoreless outing.

The 25-year-old Bonifacio broke into the majors last year, hitting 17 homers in 113 games for Kansas City. But he missed the first part of this season after a positive test for Boldenone, resulting in an 80-game suspension.

"He knows he made a mistake, he knows he paid for it and now he's going," manager Ned Yost said.

Duffy (5-8) struck out eight while pitching seven innings of four-hit ball. He tossed six scoreless innings at Minnesota on Monday night, but left with a no-decision after the Twins rallied for a 3-1 win.

"We've been doing our best to treat each day like a new day," Duffy said, "and there's an opportunity to win a baseball game every day."

The White Sox (32-62) lost for the seventh time in nine games. Reynaldo Lopez(4-7) allowed five runs and nine hits in 7 2/3 innings in his first start since his wife, Jhilaris, gave birth to a baby girl named Zoe on Friday.

"It was a really good outing," Lopez said through a translator. "I just made two mistakes. I paid for them."

Lopez, who played with a pink glove with his daughter's name sewn into it, kept Chicago in the game before surrendering a two-run homer to All-Star Salvador Perez on a 0-2 pitch in the eighth. It was Perez's 13th of the season.

The White Sox also lost second baseman Yoan Moncada to a bruised right knee in the fifth. Moncada was hit by the ball while going to catch a pickoff attempt at second.

X-rays were negative, and the team said he is day to day.

"I feel really sore," Moncada said through a translator. "It's nothing serious."

White Sox third baseman Yolmer Sanchez made a terrific over-the-shoulder grab on Alex Gordon's foul popup in the second inning. Gordon got a measure of revenge in the seventh, making a nice lunging catch to take a potential hit away from Tim Anderson.

The White Sox paid tribute to their 1993 AL West championship team all day long. Led by AL MVP Frank Thomas, the White Sox won 94 games that season before losing to Toronto in the AL championship series.

Bo Jackson, Ozzie Guillen, 1993 AL Cy Young Award winner Jack McDowell and Hall of Famers Tim Raines and Thomas were among the players introduced during a pregame ceremony. McDowell threw a ceremonial first pitch to Guillen, and the team showed highlights from that season on their center-field videoboard during the game.

"It was the most talented team I was ever on," Thomas said. "I thought we should have won it that year. We fell a little short."

Royals: Yost said RHP Jakob Junis (back tightness) will start the team's second game after the All-Star break next Saturday against Minnesota.

The White Sox send Lucas Giolitoto the mound for the series finale Sunday afternoon. The Royals are planning a bullpen day, beginning with right-hander Burch Smith. Giolito (5-8, 6.59 ERA) is coming off perhaps his best outing of the season, limiting the World Series champion Astros to two runs in a career-long 7 1/3 innings in a 2-1 loss last Sunday. Smith (0-0, 5.83 ERA) just made his first start of the year Wednesday at Minnesota, throwing 71 pitches over 3 1/3 innings in an 8-5 loss.

"Let him go ahead and start it off, 50 to 60 pitches somewhere in there just to monitor how he's feeling and kind of go from there," Yost said.