Bryant off to the right start at Mizzou 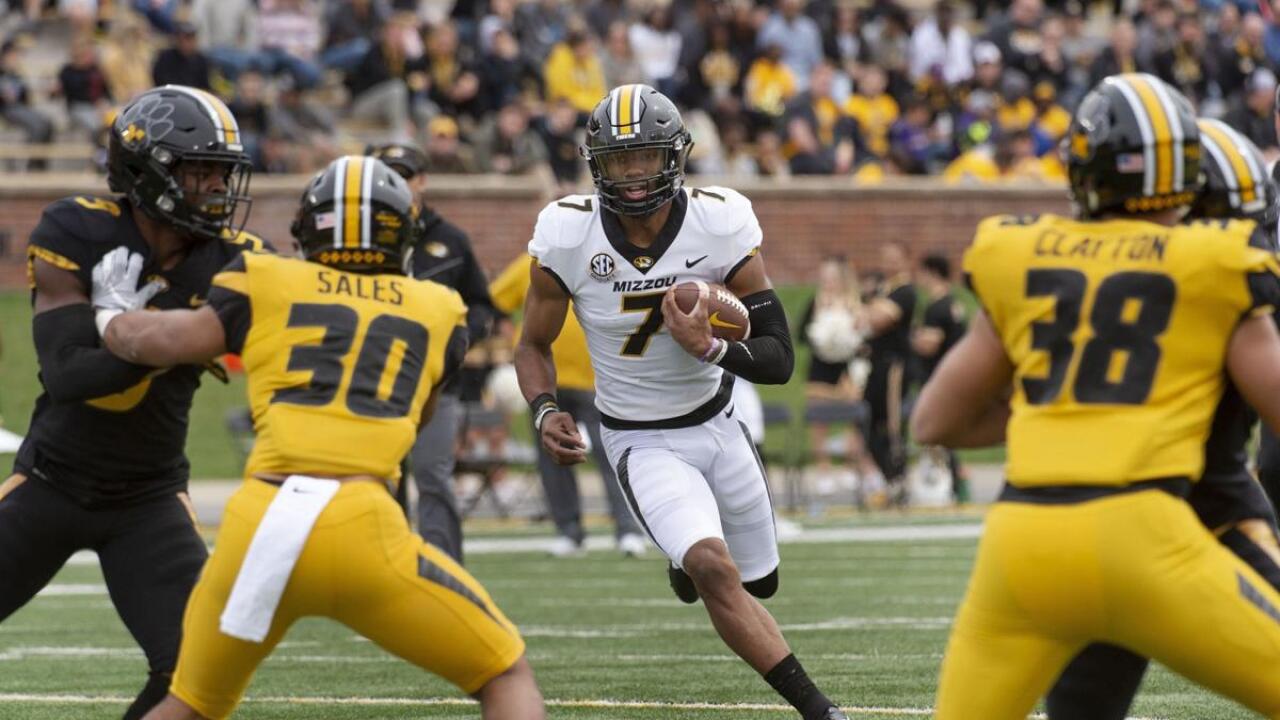 COLUMBIA, Mo — It was one out of 109 plays in a vanilla football scrimmage that’s no more important than the other 14 spring practices that aren’t broadcast on live TV, but a simple 11-yard pass on the third series of Saturday’s Black and Gold spring game said a lot about Missouri’s new offense.

The Tigers haven’t completely redesigned their system under offensive coordinator Derek Dooley, but the driver is new. And obvious to anyone at Saturday’s scrimmage, the new guy’s strengths are different than his predecessor.

On first and 10 from his 46-yard line, Kelly Bryant couldn’t find an open target, leaked out of the pocket to his right and kept his eyes looking and his legs churning as he pulled away from the nearest defender. He uncorked a strike to Barrett Banister, who ran parallel to the line of scrimmage 11 yards downfield and snagged the pass to complete a signature scramble drill. First down.

What looked like the result of fortunate improvisation was all part of the Tigers’ new script: When Bryant scrambles, his receivers follow.

For the few thousands of fans at Memorial Stadium and the untold number watching on ESPNU, this was their first impression of Mizzou Offense A.D. — After Drew. Drew Lock set records with his uniquely strong arm the last four seasons, and with Lock watching from the sideline Saturday, Bryant accurately threw the ball in his public debut and consistently moved the chains with his arm and his legs.

Matched against the backup defense, the graduate transfer from Clemson completed his first eight passes and led the Black team into the red zone on his first three possessions. It wasn’t an overly prolific performance — in four series, he completed 12 of 17 passes for 150 yards and only once came close to throwing an interception — but a promising outing to take into the next stage of the offseason.

The Black team, composed of starters and top backups, dominated the Gold team of reserves 21-3 and outgained them in yardage 433-95.

Just like the new team facility in the south end zone, Mizzou’s offense is still under construction. But in the three months Bryant has been on campus, Dooley has already installed more plays than he had this time last year, Tigers coach Barry Odom said. That’s the upside of landing an experienced quarterback from a winning program.

“He’s got a high football IQ and he wants more,” Odom said.

More than anything Saturday, Odom wanted to see how Bryant responded to the day’s ups and downs, how he bounced back from adversity and how he moved on from success. Like he has all spring, Odom came away impressed.

“He’s becoming more vocal with the team, which is good,” he said. “I think that’s important at quarterback. He prepares well enough and puts himself in position that the respect factor is there that he can get guys going and keep them going if things are going really well.”

Mizzou’s opening drive Saturday was Bryant’s best, even though he didn’t have the luxury of playing with his two best receivers. Tight end Albert Okwuegbunam is still recovering from last year’s shoulder injury and slot receiver Johnathon Johnson has been nursing a sore hamstring. Bryant completed all three of his passes on the drive, including a 36-yard heave down the sideline, a back-shoulder fade to fellow grad transfer Jonathan Nance. Two plays later Larry Rountree III was in the end zone with a 4-yard run.

Bryant led the Black offense inside the 10-yard line on the next two drives but both series stalled. In a flashback to last year’s special teams woes, the Tigers missed 27-yard field goals on each possession.

As usual in scrimmages, the defense wasn’t allowed to tackle quarterbacks, so all three of Bryant’s rushing attempts were whistled dead before he could absorb contact. He was credited with 8 yards. Teammates were confident he’ll earn more once the real games begin.

“I know he can bring a lot,” said Nance, who caught three passes for 48 yards. “People can’t tackle him one-on-one. We’ll see in the game. You know how that goes. People think they’re tackling him but they’re really not tackling him.”

“Kelly’s a little different at the quarterback position when we’re not playing two-hand touch,” Odom said. “He’s a hard guy to bring down.”

He was even harder to track down after the scrimmage. Still a rookie to the team’s postgame routine, Bryant didn’t stop at the team facility for media interviews after the scrimmage. His teammates were more than happy to talk about his debut, especially those potent scrambles.

“We have rules in everything where we’re supposed to go anytime we see a scramble,” said slot receiver Barrett Banister, who finished with a team-high eight catches for 73 yards. “First you’ve got to run with him and try to find the open spot. Then obviously if you don’t get the ball you’ve got to turn and block someone because he can run, too. That’s just one thing we’ve been really working on this spring, his ability to extend plays.”