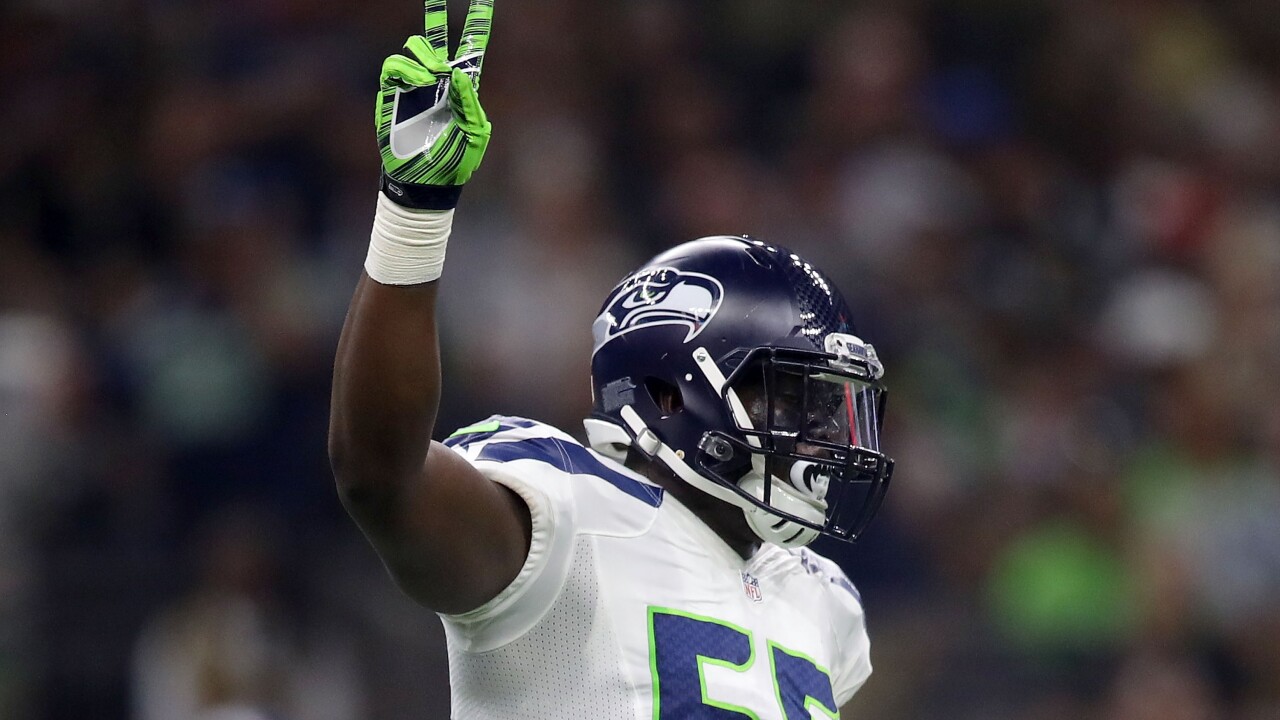 KANSAS CITY, Mo. — The Kansas City Chiefs have made a habit of inciting controversy during the NFL draft in the Andy Reid era by acquiring players that have a history of off-the-field issues.

This year, they didn't even wait until the draft.

The Chiefs swung a blockbuster trade with the Seattle Seahawks on Tuesday to acquire pass rusher Frank Clark for a package of picks, a person familiar with the deal told The Associated Press. The two sides then reached an agreement on a $105.5 million, five-year contract that was contingent on Clark passing a physical, which was expected to be completed Wednesday.

The person spoke to the AP on condition of anonymity because the deal, which sent the Chiefs' first-round pick this year and a second-rounder next year to Seattle, had not become official.

That didn't stop fans, talk-radio hosts and people from just about every walk of life in Kansas City from debating the merits of bringing in yet another player with baggage.

The team took a chance on cornerback Marcus Peters, who was traded away after getting into trouble with coaches. It drafted running back Kareem Hunt, then quickly cut him when he kicked a woman in a hotel hallway. And it picked wide receiver Tyreek Hill, who was dealing with his own domestic violence case that centered on the 3-year-old child he shares with his fiance.

While Clark has stayed out of trouble during four years in the NFL, he was kicked off the team at Michigan when he was charged with first-degree domestic violence and assault following an incident with his then-girlfriend. The charges were later reduced to fourth-degree persistent disorderly conduct and Clark completed a domestic violence course and paid court costs and fines.

One organization that called the trade "disconcerting" was the Rose Brooks Center, which has been providing a safe haven for victims of domestic violence for 40 years.

"Organizations and other systems have a community responsibility to hold offenders accountable, just as Rose Brooks Center does, in order to end the epidemic of domestic violence," the center said in a statement. "When we do not hold offenders accountable, it sends a message of acceptance not only to the offender, but to the victim, reducing the likelihood that a victim will come forward."

The Chiefs have not commented on the trade because it has yet to become official, though the team did tweet video from the locker room of a No. 55 jersey with Clark's name on it.

Look who's on his way to KC... pic.twitter.com/Ts52sv4dMc

His arrival continues a trend of the Chiefs giving players with off-the-field history a second chance, with mixed results.

Peters, who was kicked off his team at Washington for fighting with his coach, quickly became one of the league' best cornerbacks. But increasingly erratic conduct reached a tipping point when Peters got into an altercation with then-defensive coordinator Bob Sutton following a game.

Peters ultimately was shipped to the Rams last offseason for second- and fourth-round draft picks.

In 2016, the Chiefs used a fifth-round pick on Hill, who was kicked off the team at Oklahoma State after punching his pregnant girlfriend and transferred to tiny West Alabama. His elite speed and game-breaking ability made him one of the league's biggest stars on the field, but off the field many fans were dismayed at the pick — some even gave up season tickets or swore off the team altogether.

Hill completed a series of steps to have the original domestic violence charges expunged, and he had stayed out of trouble until last month when police were called to his home twice in a span of nine days to investigate a report of child abuse and battery of a juvenile. On Wednesday, the Johnson County district attorney declined to press charges in the case because he could not determine whether it was Hill or his fiance, Crystal Espinal, that injured the child.

"We believe a crime has occurred ," district attorney Steve Howe said. "We've asked the police to do quite a bit of follow-up work. They've completed their investigation and we're at an impasse at this point and any further investigation would be unwarranted."

The Chiefs have declined to discuss Hill even as they began offseason workouts, and coach Andy Reid merely said "he is here" when asked about his talented wide receiver last week.

"I think it's going to work itself out here," he said, "and we'll deal with the information as it comes. Like I said, there's nothing I'd probably be in a position to say right now on that."

The Chiefs have been quick in addressing domestic violence in at least one case.

After choosing Hunt despite a history of issues in college, and watching him lead the league in rushing as a rookie, they wasted no time in cutting him once video surfaced of an incident in an Ohio hotel hallway. Hunt was seen pushing and kicking a woman while she was on the ground.

"Our scouting staff does a really good job of vetting players and part of that analysis is their character," Chiefs chairman Clark Hunt said at the time. "Obviously, it's very hard to learn everything about somebody. Sometimes you have somebody who in college didn't have any incidents, then they get to the pro level and with the fame and fortune that comes with the position, they do something you don't expect. We're certainly going to try to get better, but I don't think you can ever be perfect."

It's unclear what kind of due diligence the Chiefs did when it came to Clark, though two people familiar with his signing said the background work done was extensive.

What they heard was enough to make the Chiefs comfortable not only with bringing him aboard, but also making Clark one of the highest-paid pass rushers in the NFL.