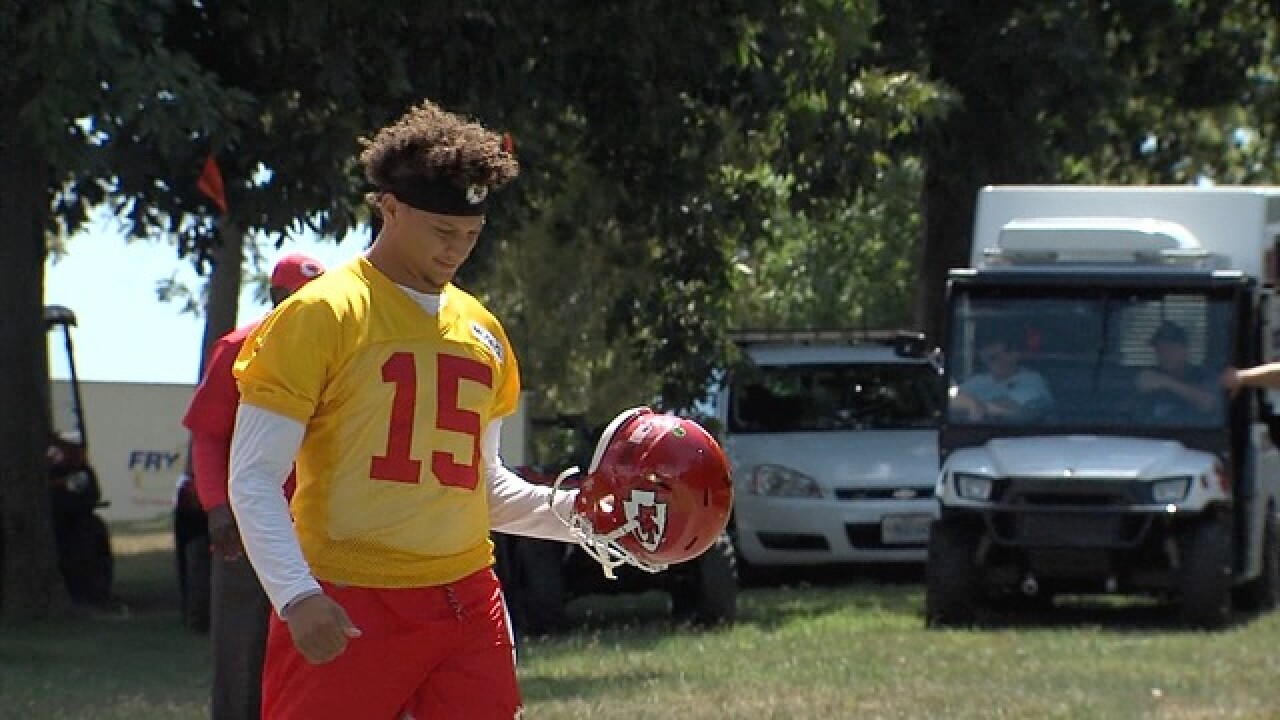 But Chiefs coach Andy Reid actually would almost welcome a few training-camp interceptions. That’s when he would prefer them, after all.

“I’m big on that in camp,” Reid said. “I want them to push the limits of the offense. Find out what you can do, so when you get in a game you’re not throwing interceptions, if possible. You’ve already experimented with that and have an idea what I can get away and what I can’t get away with.”

Reid is challenging Mahomes with some new plays this season and the reigning NFL MVP continues working to improve or refine fundamentals, from throwing mechanics to footwork.

“There’s things he can work on now that will be important,” Reid said. “There are going to be things when he’s a 15-year vet that he’s still going to have to work on. It’s just one of those positions that you’ve got to hone it in and there’s always something that you want to add to your game.”

But if long-suffering Chiefs with quarterback-related PTSD remain worried about a “sophomore slump” or regression to the mean, perhaps it’s time to put those fears to rest.

Defensive end Frank Clark and defensive tackle Chris Jones have received plenty of attention during the preseason, and understandably so, but there seems to be some incredible depth on the Chiefs’ defensive line.

That includes a pair of versatile former second-round picks, Tanoh Kpassagnon and Breeland Speaks, who needed time to develop and finally may be ready to contribute in a substantive way.

Kpassagnon even has worked in the first-team defense at times along with Speaks, who was miscast in Bob Sutton’s 3-4 scheme last season but is carving out a role in new defensive coordinator Steve Spagnuolo’s 4-3 defense.

“The great thing about Breeland is he can play inside or outside,” Reid said. “He’s working on different rush moves, which young guys have to work on. They come in with one or two that they really like. Well, in the NFL, you’ve got to have a couple more pitches that you throw, so he’s been working on those.”

If the season started today, the Chiefs’ offensive line from left to right would be Eric Fisher, Andrew Wylie, Austin Reiter, Laurent Duvernay-Tardif and Mitchell Schwartz.

Fisher, who was the No. 1 overall pick in 2013 out of Central Michigan, has lost track of how many left guards he’s played alongside now.

“I’d say I’m used to it,” he said. “I don’t even think you could count on two hands how many guards I’ve played next to now, but it’s cool … just to see the evolution of the Chiefs and where we were in 2013 and where we are now.”

Fisher hasn’t become a dominant left tackle, but he’s certainly worked to become an above-average NFL player and, with Schwartz as the other bookend, gives the Chiefs a rock-solid tackle set.

The biggest question mark, aside from Duvernay-Tardif’s health, is Reiter.

He was the third center on the Chiefs’ depth chart at center last season behind Mitch Morse (Buffalo) and Jordan Devey (Oakland), who signed elsewhere as free agents in the offseason and left Reiter to fill the void.

Fisher said he isn’t worried. The offensive line has embraced the next-man-up mentality and continued to get the job done.

“That’s one of the sweet things about our line,” Fisher said. “When I got here, it was such a young line, but we’ve got some veteran dudes now. … We couldn’t be off to a better, faster start.”

Defensive end Frank Clark did not participate in Monday’s light workout without pads. He has a sore wrist, according to Chiefs coach Andy Reid.