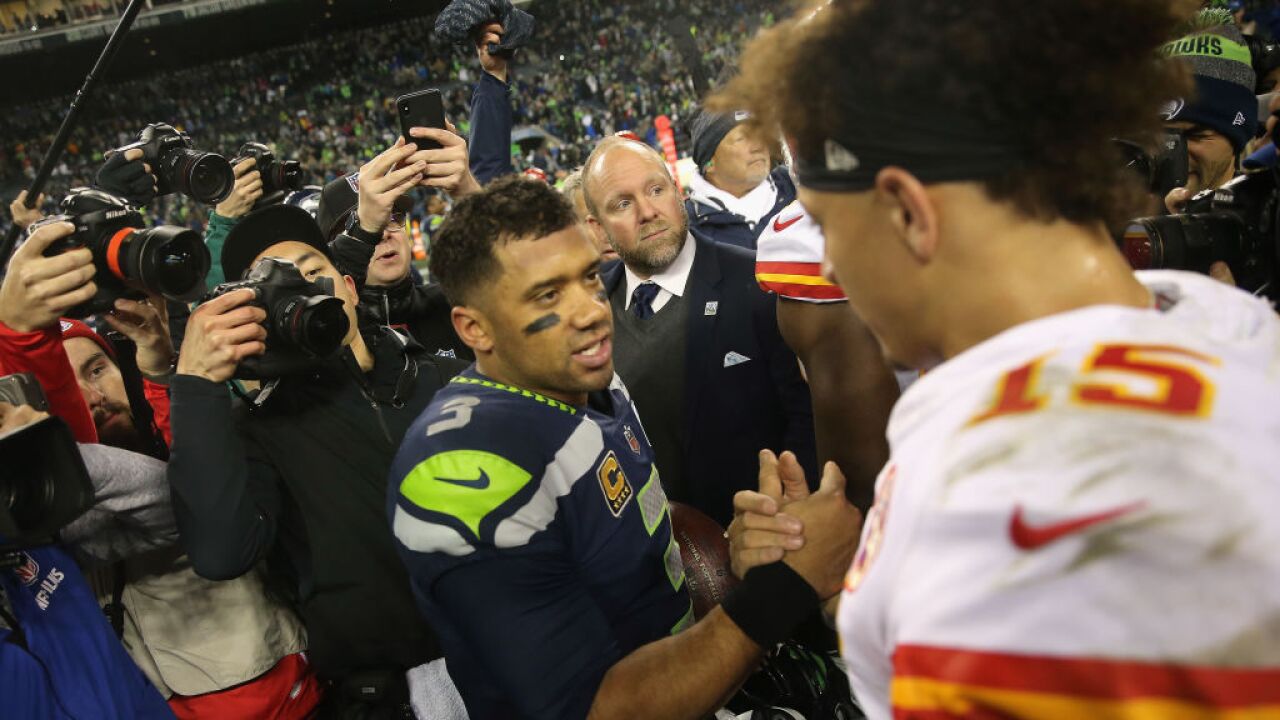 SEATTLE — Doubted before the season began, questioned even more after a 0-2 start, the Seattle Seahawks are back where they've spent most seasons since Pete Carroll arrived.

The Seahawks are in the playoffs and perhaps as the type of opponent no one would like to see in the postseason.

"You hear it. You hear the noise. You hear the 4-12 predictions, the 5-11 and that stuff motivates you," Seattle linebacker K.J. Wright said. "We kept believing."

LISTEN: The 4th and 1 Chiefs podcast breaks down road loss in Seattle

Seattle clinched its spot in the NFC playoffs after toppling Kansas City 38-31 on Sunday night, thanks to three touchdown passes from Russell Wilson and a pair of TD runs by Chris Carson.

Wilson got the better of Kansas City's Patrick Mahomes and helped lead Seattle back to the postseason after missing the playoffs a year ago. Seattle's now made the playoffs in seven of the nine seasons with Carroll in charge, and six of seven with Wilson at quarterback.

It was an unexpected accomplishment after Seattle overhauled its roster in the offseason. But the discovery of the best run game in the NFL, coupled with vets like Wilson, Bobby Wagner and Doug Baldwin was enough for Seattle to navigate its way into the postseason.

"There's an emotion to it that's deep and it's because there wasn't very many people that thought we could do this," Carroll said. "Most everybody thought we didn't have a chance and to hang together, hang through it, we got it done before the season is even over."

The Seahawks (9-6) can wrap up the No. 5 seed and a matchup with Dallas by beating Arizona in Week 17.

Wilson was 18 of 29 for 271 yards, including a 2-yard touchdown pass to Ed Dickson with 7:31 left for his third TD. But it was Seattle's next drive that stood out as the best run team in the NFL put the game on the arm of its quarterback and receivers in the fourth quarter.

Leading 31-28, Wilson hit David Moore for 7 yards to convert a key third-down and after Kansas City used its first timeout with 3:04 left. He followed with a 45-yard strike to Tyler Lockett, and Baldwin added a one-handed catch for 29 yards to the Chiefs 1. Carson capped the decisive drive with his second TD run with 2:29 left gave Seattle a 38-28 lead.

Carson rushed for 116 yards, while Baldwin had seven catches for 126 yards and an acrobatic 27-yard touchdown catch in the third quarter.

"When it's our time to make plays and we're given opportunities to make plays, we are going to make them. We have shown that," Baldwin said.

Mahomes had a few of his own magical moments that will enhance his MVP candidacy. But for the second straight week the Chiefs (11-4) were unable to come through with a victory that would have wrapped up the No. 1 seed in the AFC and will go into Week 17 with the chance of being division champs for find themselves on the road for the opening weekend of the postseason.

"I know if you take care of business, you don't have to talk about anything," Kansas City coach Andy Reid said. "When we play the way we can play, and we are going to play, we are a tough team."

Mahomes was 23 of 40 for 273 and three TDs. Mahomes had only 83 yards passing in the first half. He had 76 and was 6 of 6 on Kansas city's first possession of the second half, finishing the drive with a scrambling, sidearm fling to Charcandrick West for a 25-yard touchdown that pulled the Chiefs even at 17-all midway through the third quarter.

That was the last time they would be even. Harrison Butker's 32-yard field goal with 1:20 left pulled the Chiefs within seven, but the onside kick went out of bounds and Seattle ran out the clock.

"It's frustrating knowing that we've had it so close both times," Mahomes said. "Luckily we are still in the position where we will have the opportunity to go out there and win it next week."

Damien Williams rushed for 103 yards and caught a 2-yard touchdown pass in the first half. But Seattle managed to keep Tyreek Hill and Travis Kelce from taking over and the Seahawks pass rush did enough to disrupt the Chiefs passing attack. Mahomes was sacked only once but was hit 11 times. Kelce had five catches; Hill had four. Neither scored.

"We knew (Hill) and (Kelce) were the go-to guys and if you eliminate those two guys you have a good chance of winning," Wright said.

Carson became the first Seattle running back since Marshawn Lynch in 2014 to have 1,000 yards rushing. ... Kelce passed Tony Gonzalez for most yards receiving in a single season by a tight end in Chiefs history. ... Mahomes has 31 touchdown passes on the road, most in NFL history. Tom Brady had 29 in 2007. ... Wilson is first QB in NFL history with winning record in each of first seven seasons.

Kansas City running back Darrel Williams suffered a hamstring injury in the first half and did not return. Seattle's banged up offensive line saw J.R. Sweezy go down with an ankle injury in the second quarter and he did not return. D.J. Fluker, who was only supposed to play a limited number of snaps filled in and played the entire second half.

Seattle had kicking concerns arise after Sebastian Janikowski was roughed on a field goal attempt in the second half. He was able to hit a 28-yard field goal later in the drive, but it was punter Michael Dickson handling the next two kickoffs with drop kicks. Dickson has done it in special situations this season.

Seahawks: Seattle hosts Arizona to close out the regular season.