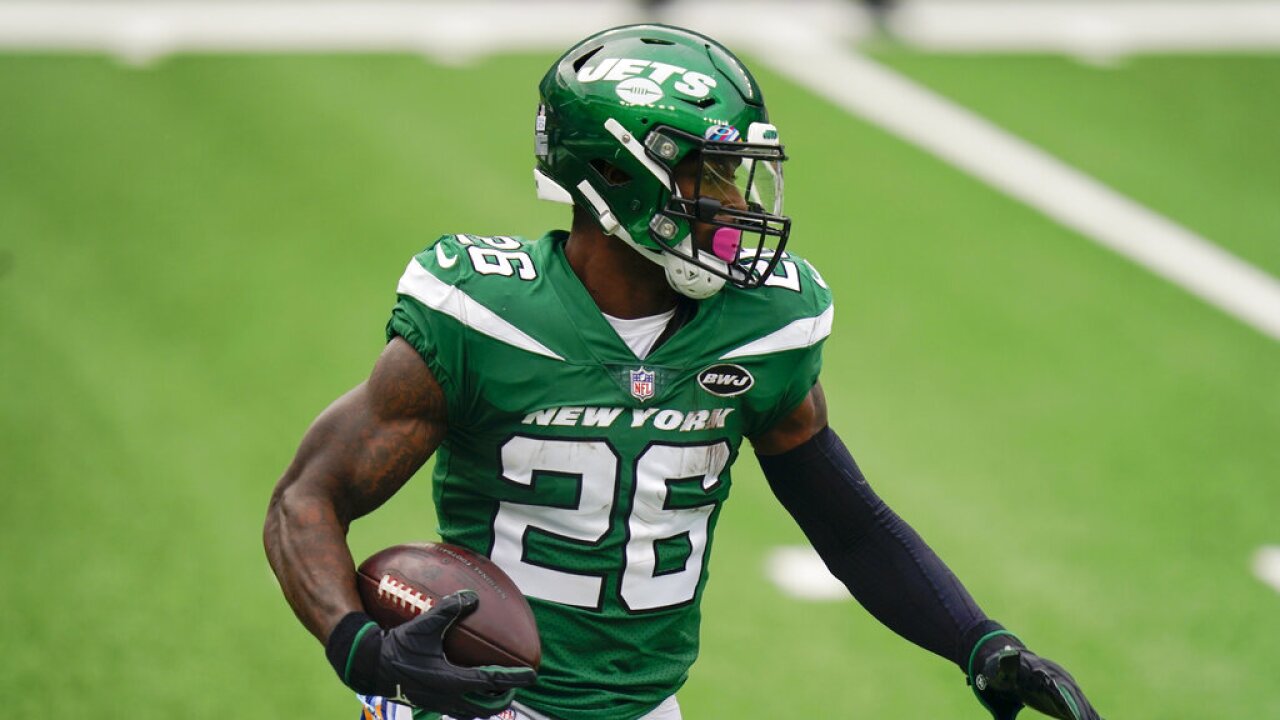 (Copyright 2020 The Associated Press. All rights reserved. This material may not be published, broadcast, rewritten or redistributed.)
Seth Wenig/AP
New York Jets running back Le'Veon Bell runs the ball during the first half of an NFL football game against the Arizona Cardinals, Sunday, Oct. 11, 2020, in East Rutherford, N.J. (AP Photo/Seth Wenig)

ESPN NFL reporter Adam Schefter reported that Bell had agreed to a one-year deal with the reigning Super Bowl champions Thursday to Facebook.

"Bell wanted to win a Super Bowl and believes Kansas City is the place to go try to do it," Schefter said in reporting the expected signing.

The Chiefs and Bell later confirmed the new on Twitter.

Bell, 28, who was released Tuesday by the New York Jets, joins a Chiefs backfield led by rookie standout Clyde Edwards-Helaire. The Jets, by the way, are slated to play the Chiefs on Nov. 1 at Arrowhead Stadium.

He received a warm welcome from his new teammates, including star quarterback Patrick Mahomes, on Twitter.

Welcome my brother! Let’s get it! https://t.co/AgUEcuxy05

Bell won't be available immediately for the Chiefs.

It's unlikely, given the complexity of coach Andy Reid's offense, that he would be able to get up to speed under normal circumstances before Kansas City's next game on Monday at the Buffalo Bulls.

But the NFL COVID-19 protocol will require Bell to test negative for the virus several days in a row before he can enter the team facility and begin working out with the Chiefs, according to Adam Teicher of ESPN.

FYI, Bell can't according to NFL protocols enter their facility or start to practice until he tests negative for 5 straight days and then tests negative on the 6th day with a point of contact test. So he won't practice for about a week at best.

Bell sat out the 2018 season in a contract dispute with the Pittsburgh Steelers before signing a four-year, $52.5 million deal with the Jets ahead of the 2019 season.

He only played in 17 games during with New York before the team released him amid clashes with coach Adam Gase.

Bell finished his career in New York with 264 carries for 863 yards and three touchdowns. He also added 69 receptions for 500 yards and a touchdown.

Terminating Bell's contract leaves the Jets with more than $15 million in dead cap space this season and another $4 million in 2021, according to Over the Cap.

New York wound up paying Bell, who made nearly $28 million on the now scrapped deal, more than $25,000 per yard gained from scrimmage in his one-plus season.

He averaged nearly 1,600 yards and more than eight touchdowns per season despite missing 18 games during his time in Pittsburgh.

Edwards-Helaire, a first-round pick last spring from LSU, has struggled in goal-to-go and short-yardage situations as a rookie, though blocking also has been an issue at times.