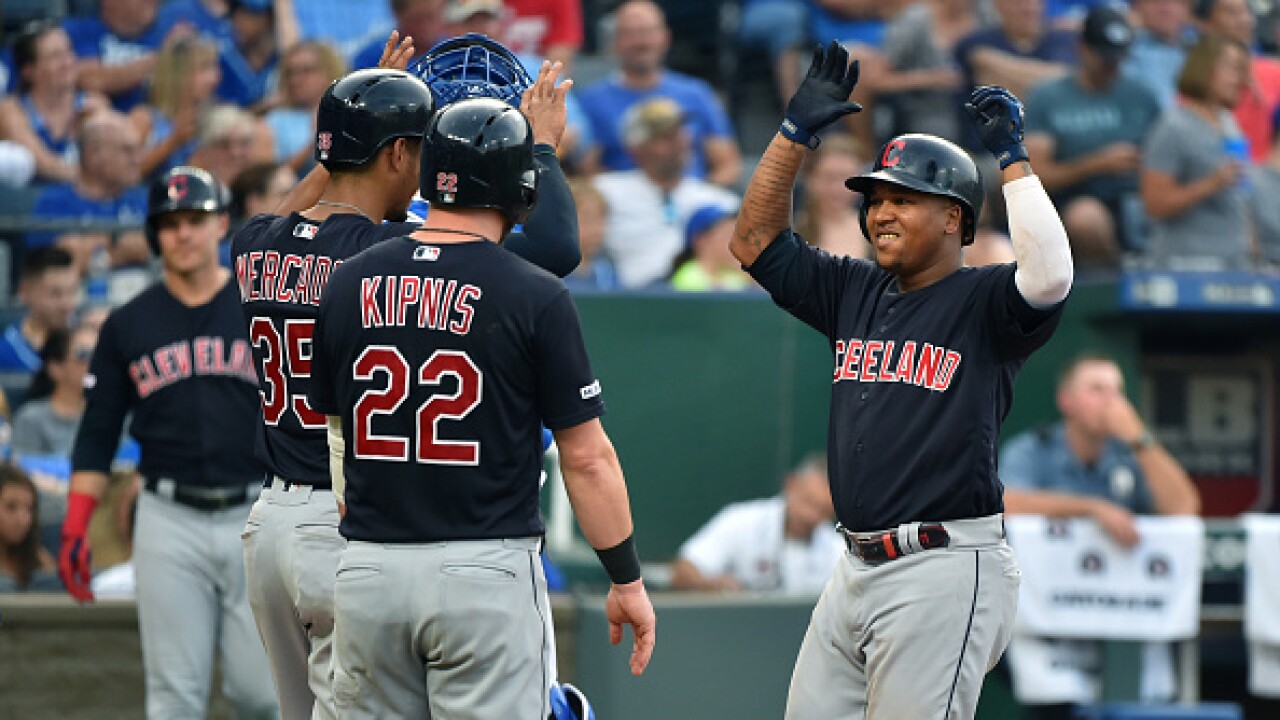 KANSAS CITY, Mo. (AP) -- Mike Clevinger won't give away the secret to his success against the Kansas City Royals.

Clevinger (5-2) allowed one run on eight hits in seven innings and didn't walk a batter as the Cleveland Indiansdefeated the Royals 9-1 on Saturday night.

''I just think it's coincidence,'' he said with a smirk when asked why he's been so successful against the Royals. ''I've found some things in my mechanics lately that have put me in good spots. I've found some pitches that are working.

''Maybe it's bad luck on their part or good luck on my part.''

Jason Kipnis hit a grand slam in the first inning to give Clevinger a comfortable lead before the mound.

''It's so awesome to come out with a huge lead early,'' Clevinger said. ''There's more room for error. I still have to pitch. We're not going to take the lead for granted. We're still going to out and pitch like it's 0-0.''

''He kept them off the scoreboard,'' Francona said. ''We've talked about how that team battles. He used a good fastball, breaking ball and change-up. He did a really good job and got deep into the game.''

Cleveland's victory, coupled with the Minnesota Twins' loss at Chicago, moved the Indians within a game of first place in the AL Central. Cleveland had trailed by 11 games on June 15.

''It means we're a game back,'' Francona said of his team's momentum. ''There's a lot of baseball left to play. We're not playing the Twins tomorrow. So we'll see if we can beat the Royals tomorrow.''

Royals starter Glenn Sparkman (3-7) allowed eight runs on nine hits in five innings in front of a crowd of 31,181 at Kauffman Stadium, the second-largest home crowd after the season opener.

All eight runs allowed by Sparkman came on Cleveland homers.

Kipnis hit a 2-1 pitch 417 feet into the fountains in right center. It was the third grand slam of his career, but the first of the season for the Indians. Francisco Lindor and Mercado had started the game with singles before Sparkman hit Mike Freeman with a pitch, loading the bases for Kipnis.

Lindor hit his 18th homer in the second. He hit it 414 feet into the seats in right.

Jose Ramirez hit a three-run home run in the fifth inning, his third straight with a homer. He hit home runs in three straight games three times in 2018, the last on Aug. 11-14.

''That's Jose,'' Clevinger said. ''It's good to see. I feel like everyone has been on the edge of their seat waiting for him to come back. There's no better time than now.''

Kansas City scored a run in the fifth on an RBI single by Whit Merrifield. Bubba Starling was thrown out at the plate for the final out when he decided not to slide.

After Sparkman left the game, Cleveland got three hits off reliever Richard Lovelady, including Mercado's RBI double in the sixth, his fourth hit of the night.

''(Sparkman) was flat,'' KC manager Ned Yost said. ''They're hot right now. They're all swinging the bat really, really well. In the first inning I thought he was under some pitches, not enough downhill. He kind of got better in the second and the third, and he actually did a pretty good job of getting us through five. It looked like he wasn't going to make it out of the first or second inning. It's one of those days where he had to battle.

Starling extended his hitting streak to 11 games. He also matched Johnny Damon's club record for reaching base safely in the most games (12) to start a career.

Indians: All-Star 1B Carlos Santana was held out of the lineup with left shoulder soreness again Saturday. Manager Terry Francona said Santana is, ''much better. He just thought one more day would really help him.''... RHP Corey Kluber is getting closer to a return from the injured list, where he's been since May 2 with a fractured right forearm. He threw a bullpen session Saturday. Francona said: ''Today would be a bullpen. Tuesday would be a bullpen. And then Friday or Saturday maybe it's a sim game. It depends on a lot of things, maybe even how he's commanding the baseball. It's not just health; it's where he feels he is in his progression and what's he ready for.''