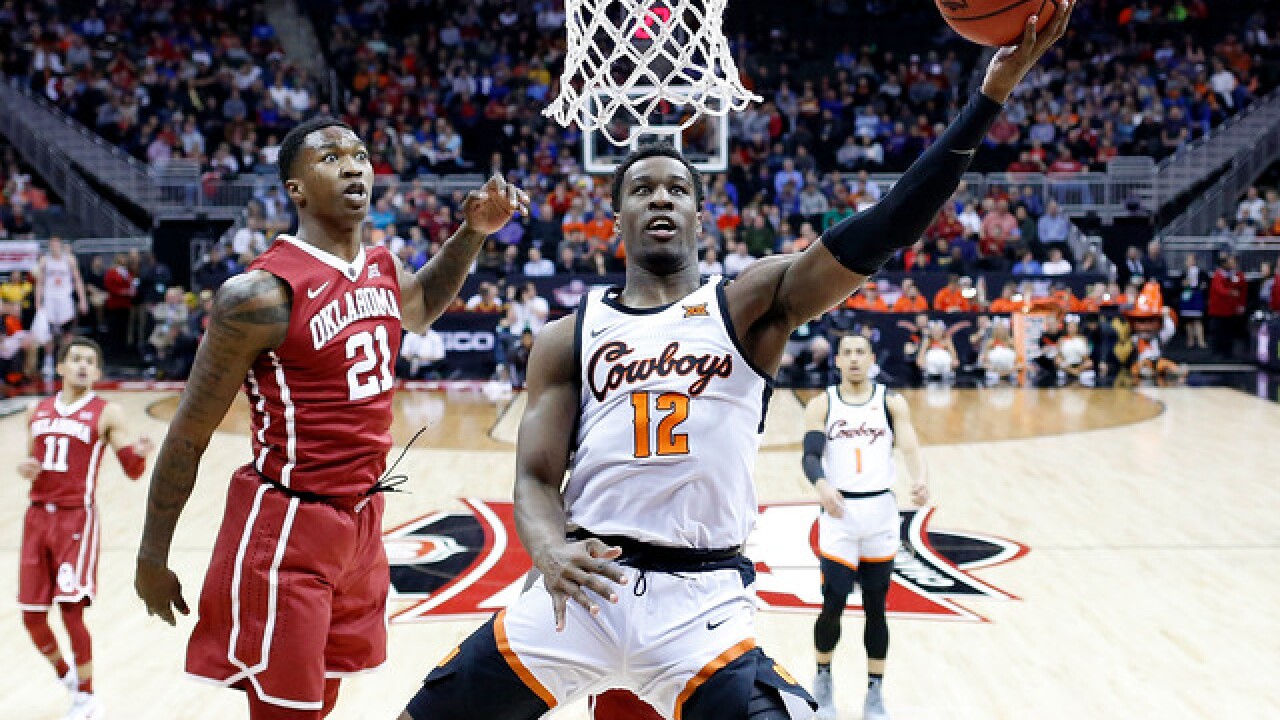 Copyright 2018 Scripps Media, Inc. All rights reserved. This material may not be published, broadcast, rewritten, or redistributed.
Jamie Squire
<p>KANSAS CITY, MO - MARCH 07: Cameron McGriff #12 of the Oklahoma State Cowboys scores as Kristian Doolittle #21 of the Oklahoma Sooners defends during the first round of the Big 12 Basketball Tournament at the Sprint Center on March 7, 2018 in Kansas City, Missouri. (Photo by Jamie Squire/Getty Images)</p>

Oklahoma State coach Mike Boynton wasted no time this week pondering whether his team had done enough to merit an at-large berth into the NCAA Tournament.

That's because the Big 12 Tournament winner gets in automatically.

"I just control the things I can control, and the only thing I've been worried about since we played Saturday was getting my team ready to play," Boynton said after the eighth-seeded Cowboys' 71-60 victory over No. 9 seed Oklahoma in the opening round Wednesday night.

"We came here to win the Big 12 Tournament. We'll worry about what next week brings next week."

Cameron McGriff  scored 18 points,  Jeffrey Carroll  added 13 points and 13 rebounds, and  Kendall Smith  finished with 11 points for the Cowboys (19-13), who led 58-53 with 6 minutes left before easing away down the stretch to set up a quarterfinal matchup with No. 1 seed Kansas.

Oklahoma State swept the ninth-ranked Jayhawks during the regular season.

"I guess we have about 18 hours," Boynton said, "to refresh our bodies and minds."

Trae Young  had 22 points on 7-for-21 shooting for the Sooners (18-13), but no amount of offense could overcome a startling disparity on the boards. Oklahoma was outrebounded 53-27, and all of those rebounds led to a 19-2 advantage for the Cowboys in second-chance points.

"We just didn't do the job we had to do against a good club in keeping them to one shot," Sooners coach Lon Kruger said. "They were more aggressive in the first half, when they popped a little bit of a lead, and again when we got close in the second half."

Now, the Sooners must anxiously await their NCAA Tournament fate.

"Instead of us taking care of our business we left it in the committee's hands," Young said. "We played in the toughest conference in America. I think our resume speaks for itself."

The Sooners beat the Cowboys by 20 in early January, back when they were ascending to No. 4 in the nation. But things began to fall apart midway through the conference schedule, beginning with a lopsided loss to Kansas State and an overtime defeat to the Cowboys in Stillwater.

The slump hit its nadir with a six-game skid that put the Sooners on the NCAA Tournament bubble.

Things weren't a whole lot better during the first half at the Sprint Center. Young was hassled every time he touched the ball, nobody else made shots and the Cowboys slowly built a 39-28 lead.

It swelled to 50-34 when McGriff hit his third 3-pointer of the second half.

"He was definitely a spark," the Cowboys'  Mitchell Solomon  said.

Young finally got on track for the Sooners, burying back-to-back 3-pointers when the Cowboys' defense lapsed. That kicked off a 12-2 run that concluded with  Brady Manek 's 3-pointer and got Kruger's slumping bunch within 52-46 midway through the second half.

It remained nip-and-tuck until the 6-minute mark, when the Sooners missed six straight and nine of 10 from the floor.  Brandon Averette  began getting loose near the basket for layups, Carroll added a jumper and  Tavarius Shine 's basket made it 64-53 and forced Kruger to call timeout.

The Sooners'  Jamuni McNeace  was called for a flagrant foul moments later, and McGriff and Solomon buried four straight free throws, effectively putting the game away.

"Proud of these guys," Boynton said. "They fought a lot of noise all season and to be playing this way at this point in the season shows a lot of character."

Oklahoma has struggled all season to put a supporting cast around Young, one of the leading names for national player of the year.  Rashard Odomes  had 12 points, but starter  Kameron McGusty  was held to six on 2-for-9 shooting and forward  Khadeem Lattin  had two points and four boards.

Oklahoma State helped its NCAA Tournament resume by beating the Sooners for the fourth time in five meetings, but a win over the Jayhawks on Thursday would almost certainly lock up an at-large bid.

Oklahoma heads back to Norman to await its postseason fate.

Oklahoma State gets ready to face Kansas on Thursday afternoon.