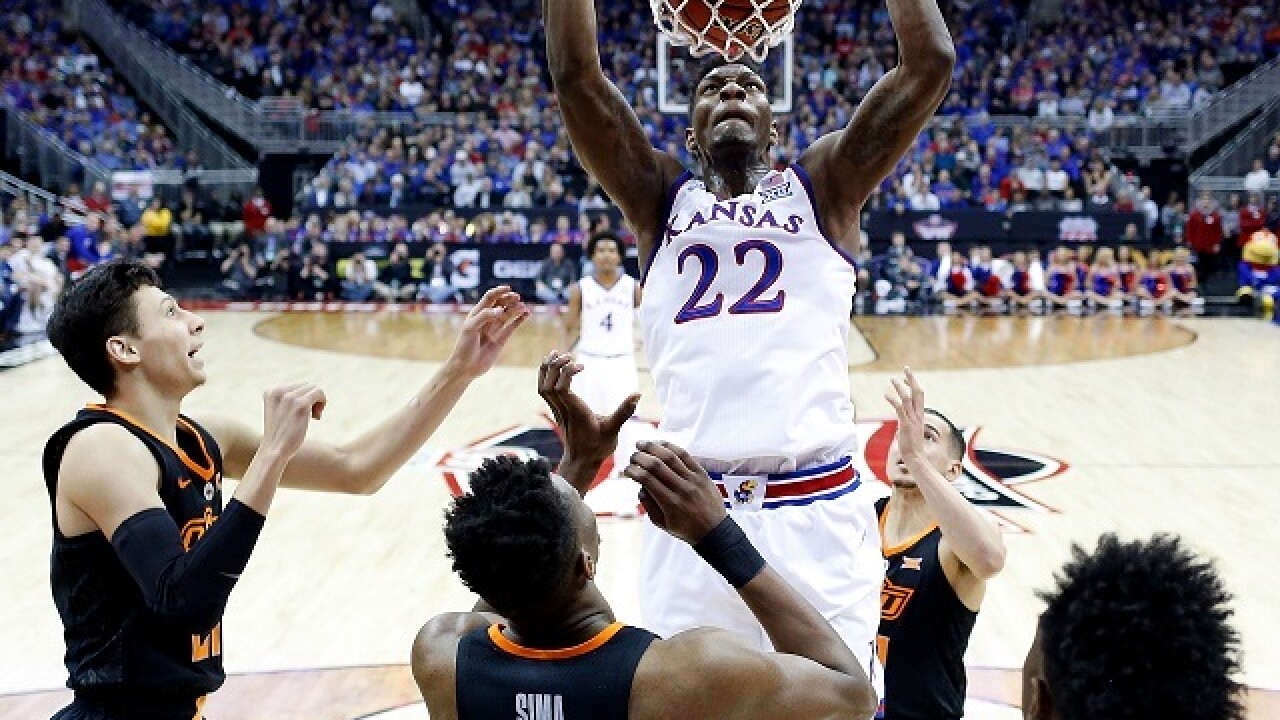 Devonte Graham added 10 points, four rebounds and nine assists for the top-seeded Jayhawks (25-7), who were swept by the Cowboys (19-14) in the regular season but broke through when it mattered.

They advanced to play Kansas State, which beat TCU in overtime earlier in the day.

Jeffrey Carroll scored 17 points and Kendall Smith had 14 for the No. 8 seed Cowboys, who can only hope their opening-round win over Oklahoma solidified their spot in the NCAA Tournament.

The Jayhawks won without 7-foot center Udoka Azubuike, who sprained the MCL in his left knee in practice on Tuesday. Azubuike will miss the entire tournament, and coach Bill Self expects him to be evaluated again on Sunday and could return for the NCAA Tournament.

Mitch Lightfoot and Silvio De Sousa combined for 14 points and 14 rebounds in his place.

Oklahoma State threatened to run the Jayhawks out of the building early on, just as it did in an 82-64 rout in Stillwater on Saturday. Yakuba Sima took advantage of the inside space where Azubuike usually roams, and Carroll's 3-point barrage gave Oklahoma State an early 10-point lead.

That's when the Jayhawks finally caught fire, going on an 18-4 charge to turn things around. It was Newman leading the way with a trio of 3-pointers, part of his 20 first-half points.

He kept the hot hand going early in the second half, scoring seven points during another big run — this one 14-0 — that made it 66-50 and forced Cowboys coach Mike Boynton to call timeout.

Boynton said after his team's rough-and-tumble win over the Sooners that he didn't buy into the notion that beating a team three times was any more difficult than beating it once. But Boynton didn't address the challenge that comes with winning two games in fewer than 24 hours.

With 15 minutes left against Kansas, the Cowboys' legs looked shot.

The Jayhawks' game-breaking run coincided with a scoreless drought for Oklahoma State that went on for more than 7 1/2 minutes. At one point midway through the half, the Cowboys were 4 for 17 from the floor and had made more turnovers (five) than field goals.

Oklahoma State made a couple of late runs, but he Jayhawks were never in danger of letting their lead slip, locking up at least 25 wins for an NCAA-record 13th consecutive season.

Oklahoma State had a 53-27 rebounding advantage against Oklahoma. But the Cowboys only had a 36-33 edge against Kansas, even with Azubuike out with the knee injury.

Kansas set a school record for 3-pointers in a season (319) when Lagerald Vick knocked one down with 3:49 to go. The Jayhawks have relied on the outside shot all year, but it came in handy with their biggest post presence sitting on the bench.

Kansas tries to beat the Wildcats for the third time this season.