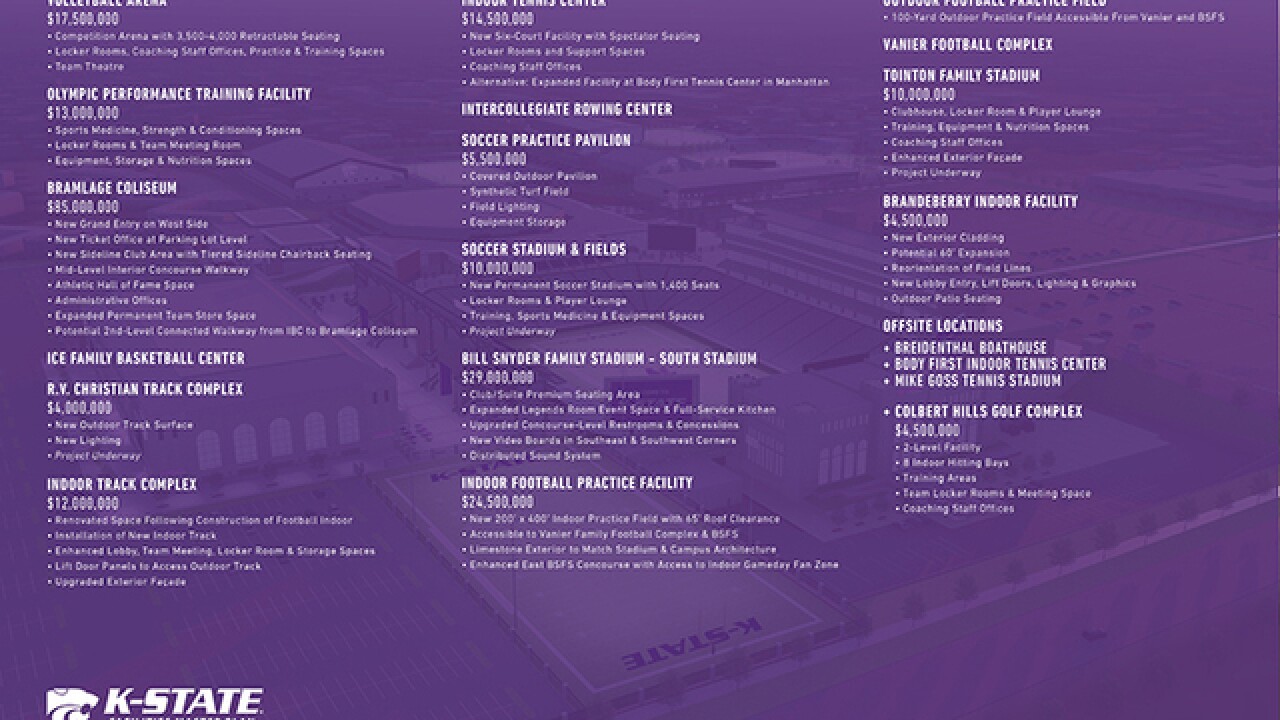 Copyright 2018 Scripps Media, Inc. All rights reserved. This material may not be published, broadcast, rewritten, or redistributed.
Courtesy of Kansas State Athletics
<p>After 16 months on the job, Kansas State athletic director Gene Taylor announced a comprehensive reimagining of the school’s athletic facilities that promises to “benefit all 16 Wildcat athletic programs.”</p> 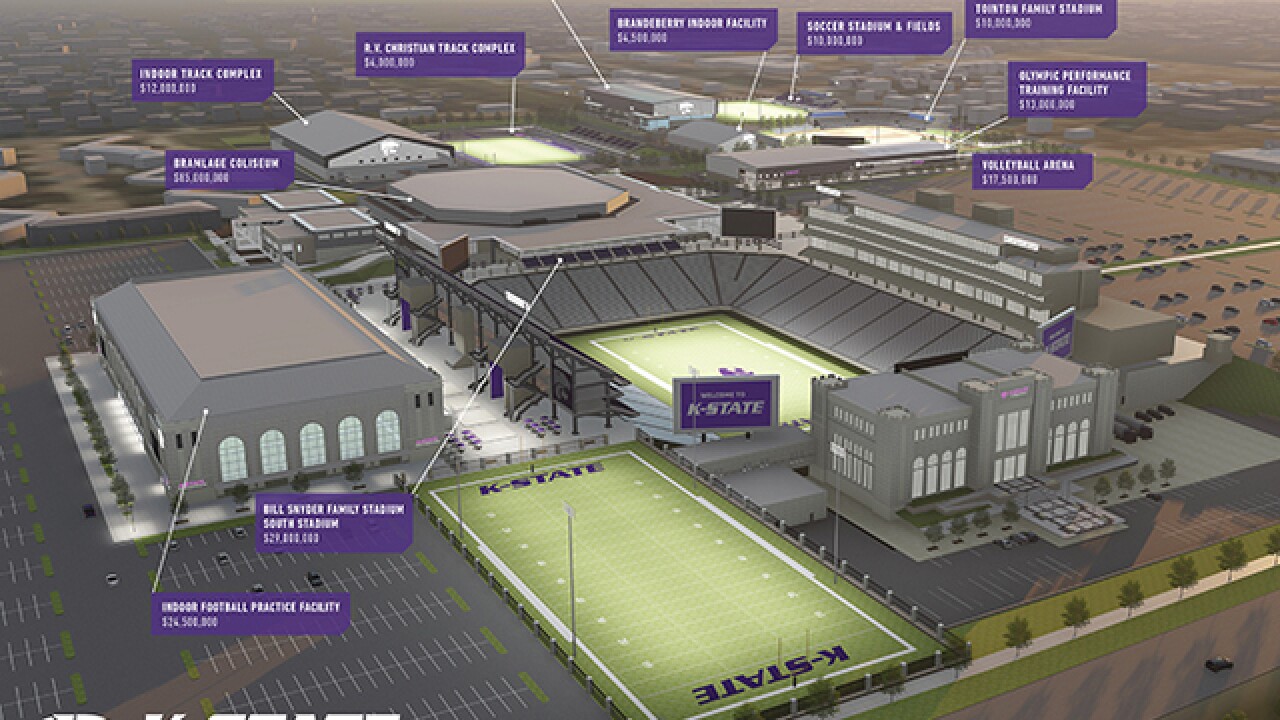 The new facility master plan includes $210 million in new construction and renovations as part of a long-term vision that will take 10 to 15 years to complete.

“With the assistance of architect consultant HOK, our staff has been working on this plan for quite some time and we are pleased to share our vision for the future of K-State Athletics and our facility infrastructure,” Taylor said in a statement announcing the master plan.

Taylor said senior associate athletic director Jeremy Niederwerder, who helped spearhead the undertaking, and two representatives from HOK, Tom Waggoner and Ron Ganz, “interviewed every sport’s coaching staff and all department support units to determine our facility needs that will benefit all of our programs,” according to the release.

The most expensive component on the plan is an $85 million renovation of Bramlage Coliseum, which is the home to Wildcats basketball among other sports.

A new “grand west-side entry plaza,” mid-level concourse and sideline club with tiered chairback seating are part of the plan, which also could be configured to include a hall of fame and expanded team store along with additional office space.

The master plan also calls for a $29 million south end zone project at Bill Snyder Family Stadium as well as new indoor and outdoor practice fields for the football team, which are projected to cost $24.5 million.

The end zone project will add new clubs and suites, expand the Legends Room event space, upgrade restroom and concession facilities and provide for new video boards on that end of the stadium, which received a $90 million west-side renovation in 2013 and a $65 million north-side renovation in 2015.

The renovations won’t impact the stadium’s capacity because the temporary bleachers will be removed from that end of the stadium as part of the project.

The new practice facility, which will be connected to the Vanier Football Complex and Bill Snyder Family Stadium, will include a 200-by-400-foot practice field with a 65-foot roof clearance.

An estimated 400 parking spaces from the stadium’s east lot are expected to be eliminated to make room for the new practice facility.

K-State volleyball will get a new $17.5 million arena, a $14.5 million indoor tennis facility will be built along with a $13 million Olympic Performance Training Facility and $12 million indoor track and field facility.

The indoor track facility will be a renovation of the current indoor football facility.

Among the smaller projects in the master plan is the construction of a new $5.5 million soccer practice pavilion; a $4.5 million renovation of the Brandeberry Indoor Complex, which houses a baseball field for use in inclement weather and can be used for football; and a $4.5 million golf complex for Colbert Hills.

“Our goal is to provide our teams the best facilities they need to compete for championships while doing so in a manner that makes sense for K-State, both financially and practically,” Taylor said.

The $210 million price tag doesn’t include the $20 million baseball/soccer project and the $4 million renovation of the RV Christian Track. Both projects already are in progress.

As fundraising continues, details and a timeline for individual projects will be determined and released throughout the upcoming year.

“We are excited about the future of K-State Athletics and anxious to begin meeting with prospective donors to determine our next steps,” Taylor said. “Once that has been determined, we will move forward with announcing and providing more details on our first priority of this master plan.”

Funding for the projects will be raised primarily through private donations to K-State’s Ahearn Fund. Some supplemental funding also could come from operating revenues.

Eventually, Cat Town, the pre-game group tailgating village that springs up on gameday, may move to Bramlage Coliseum to accommodate some of the new facilities.