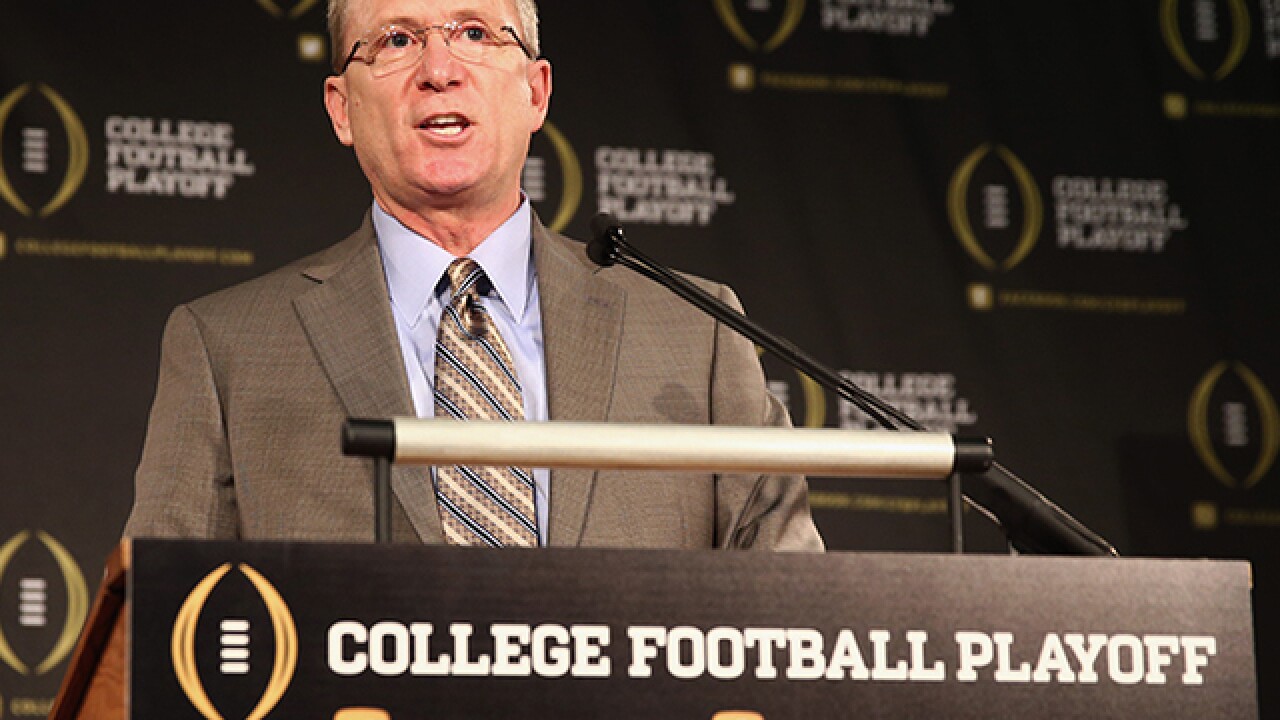 Copyright 2018 Scripps Media, Inc. All rights reserved. This material may not be published, broadcast, rewritten, or redistributed.
Tom Pennington
<p>Former Arkansas athletic director Jeff Long answered questions from the media after being named the chairman of the College Football Playoff selection committee on October 16, 2013, in Irving, Texas. Condoleezza Rice, Long was hired Thursday, July 5, 2018, as the new atheltic director at the University of Kansas.</p>

The first chairman of the College Football Playoff is now the athletic director at the University of Kansas.

Chancellor Douglas A. Girod announced Thursday that the Jayhawks and Jeff Long, who was fired as the Arkansas athletic director in November, had agreed to a five-year contract worth $1.5 million per year.

KU said $1.3 million of Long’s salary will be paid for through private donations with the school picking up the remaining $200,000.

The terms of Long's contract can be read here:

Long replaces Sheahon Zenger, who was fired in May, and becomes one of the highest-paid athletic directors in the country.

Long’s new salary is more than double what Zenger made in 2017-18, according to the database, while Missouri’s Jim Sterk received $850,000 last season and Kansas State’s Gene Taylor was paid $500,000.

Long will be officially introduced during a press conference July 11 in Lawrence. He will take the Kansas athletic department’s reins Aug. 1.

During three decades in NCAA Division I athletic administration, Long also served as athletic director at Pittsburgh for four years (2003-07) and Eastern Kentucky for three years (1998-2001). He also worked as a senior-level assistant athletic director at Oklahoma, Virginia Tech, Michigan and Rice.

“Jeff Long has tremendous leadership and administrative experience in major college athletics, and he is a terrific fit for Kansas Athletics as we work to ensure our student-athletes succeed on the field and in the classroom,” Girod said.

When the College Football Playoff replaced the BCS, Long served as chairman for the first two years (2014-15) and remained on the committee until 2017.

“My family and I are thrilled to join Chancellor Girod’s leadership team at the University of Kansas,” Long said. “It was clear from the moment I met with the chancellor and his search committee members, they have a deep love for the university and understand and appreciate the positive role intercollegiate athletics plays in the university community.”

Among Long’s biggest challenges will be resurrecting a moribund football program and raising money for a planned $350 million renovation of Memorial Stadium, including the construction of an indoor practice facility.

Zenger’s inability to get the football team back on track, including the hiring of David Beaty in 2015. Beaty is 3-33 with a 1-26 conference record in three seasons, but he received an extension after the 2016 season.

Long enjoyed a strong tenure at Arkansas, including a $160 million renovation at Donald W. Reynolds Razorback Stadium, but the football program’s inability to win consistently in the SEC proved to be his downfall as the fanbase soured.

Of course, basketball is king at Kansas, so Long also will need to develop a good rapport with Jayhawks men’s basketball coach Bill Self, who has led the Jayhawks to 15 consecutive Big 12 titles and is the face of the athletic department as well as its top power broker.

“Jeff Long is among the best and most respected athletics directors in the country,” KU men’s basketball coach Bill Self said in a release. “He has great experience, a great pedigree, and he knows what it takes to succeed at the highest levels.

“While I’m just getting to know Jeff, I’m impressed that he’s universally described as a high-character guy who will provide strong support for every sport across the entire athletics program. From my perspective, he’s exactly the type of leader we need. Our fans can be excited about the future of Kansas Athletics.”

College Football Playoff Executive Director Bill Hancock, who lives in Prairie Village, lauded the choice.
“KU couldn’t have hired a better person,” he said. “Jeff has a warm heart, solid judgment and a world of experience. Get ready, everyone, because you will love this guy.”

"Jeff Long will be an excellent addition to the Big 12,” he said. Jeff is a veteran administrator who has achieved at the very highest levels and who understands the components of championship athletics programs.”

Long is an Ohio native. He and his wife, Fanny, have two daughters, Stephanie and Christina.