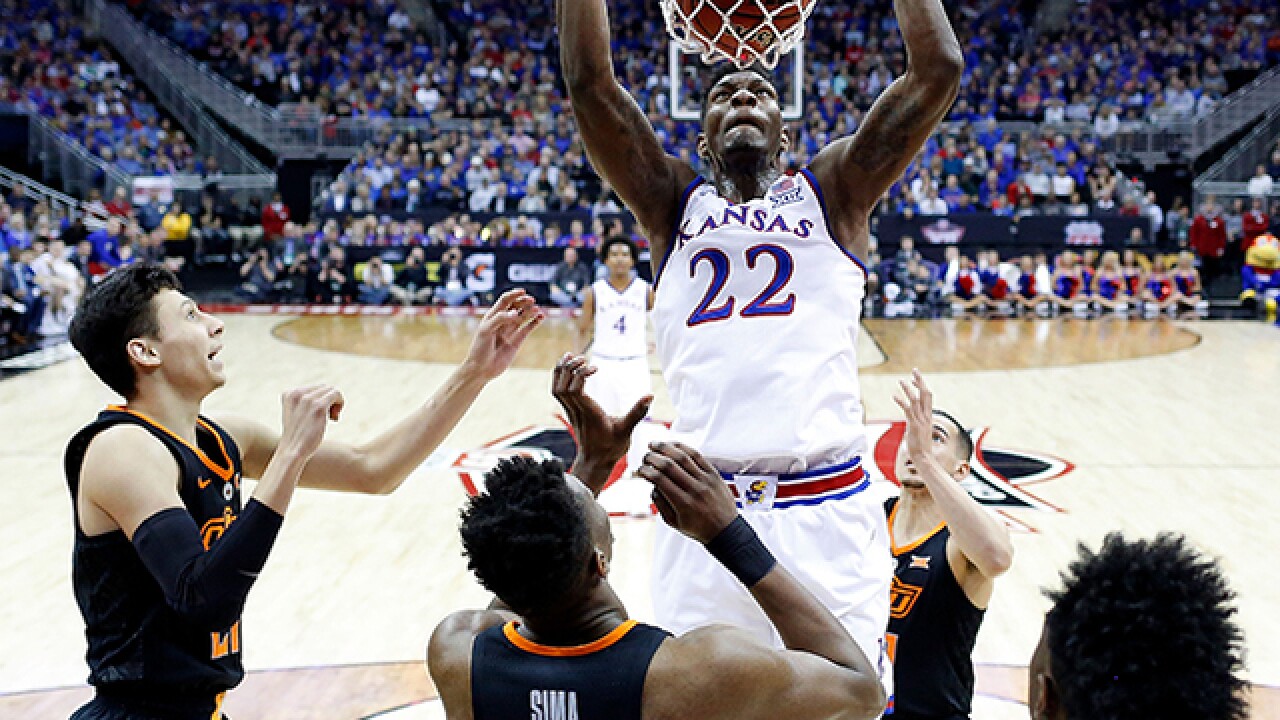 Copyright 2018 Scripps Media, Inc. All rights reserved. This material may not be published, broadcast, rewritten, or redistributed.
Jamie Squire
<p>Kansas Jayhawks forward Silvio De Sousa, shown here dunking during a Big 12 Basketball Tournament game against the Oklahoma State Cowboys at the Sprint Center last March in Kansas City, Missouri, will be withheld from competition as the school and NCAA review his eligibility. During the Adidas trial earlier this month in New York, a company represetative admitted to paying De Sousa's family $20,000 to attend KU.</p>

KANSAS CITY, Mo. — Kansas men's basketball announced Wednesday that Silvio De Sousa will be withheld from competition pending the outcome of a review of his eligibility.

De Sousa, a sophomore forward from Angola, will not suit up Thursday during the Jayhawks’ exhibition opener against Emporia State.

The review was initiated after evidence was presented during a pay-for-play trial involving Adidas in New York.

The FBI investigated representatives of the shoe company who allegedly paid elite high school players and their families in exchange for attending Adidas-sponsored schools.

“Information was presented during the current trial in New York — some of which we knew, some of which we didn’t,” Kansas coach Bill Self said in a statement released by the school. “We have decided to withhold Silvio from competition until we can evaluate and understand the new information. We have already discussed trial developments with the NCAA and will continue to work with NCAA staff moving forward.”

A statement from Coach Bill Self on Silvio de Sousa: pic.twitter.com/KVExNfX15N

He helped solidify the Jayhawks’ frontcourt during a conference play and the postseason, including Big 12 Tournament title and Final Four runs.

Defense attorneys also acknowledged that Adidas violated NCAA rules by paying the family of another KU recruit, Billy Preston, during the trial.

Preston appeared in three exhibition games last season before a Nov. 8 car wreck triggered an eligibility review that left him benched until he voluntarily left the school in January.

De Sousa was a four-star prospect according to ESPN and 247 Sports, which ranked him as the No. 32 player overall and No. 10 power forward in the 2017 recruiting class.

The Jayhawks are ranked No. 1 in The Associated Press preseason poll.