Hat is back: Miles signs 5-year contract to coach Kansas 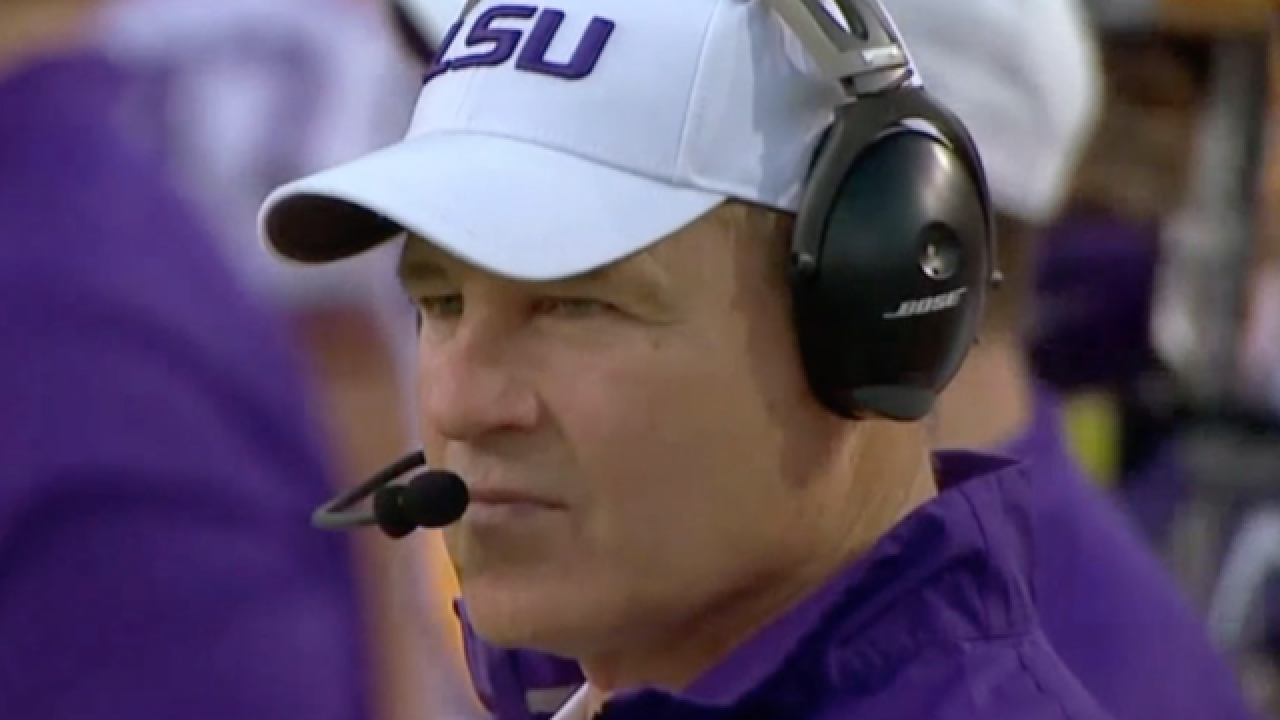 Les Miles walked confidently to the podium and slipped on a familiar white hat.

This one had "KU" embroidered across the front.

The quirky and energetic coach who led LSU to the 2007 national title, after building a consistent winner at Oklahoma State, is back in the Big 12. His task this time is to turn around a long-suffering program at Kansas, where years of losing have left fan apathy at historically high levels.

"When I first came to Kansas," Miles recalled during his introductory news conference Sunday, "I looked around and said, 'Man, it's beautiful. It's green. It's a spectacular place. I said, 'Why aren't they more successful?' I promise you, I carried that thought with me as we went."

It was a thought that accompanied him to Lawrence once more.

Miles signed a five-year contract that will pay him $2,775,000 annually with retention bonuses of $775,000 due in November 2020 and $500,000 in November 2022. The deal includes several other incentives in a sign that athletic director Jeff Long plans to invest heavily in the program.

"Even though I knew Coach Miles, in the end you don't know until they sign on the dotted line," Long said. "You have a number of coaches you're talking to because you have to talk to them. You don't know who is going to jump in the boat with you to tackle this project until they do."

The 65-year-old Miles was considered the front-runner for the Jayhawks' job from the moment David Beaty was told he would not be retained two weeks ago. Miles has a close relationship with Long dating to their days together at Michigan, and Miles made it clear he wanted back in coaching.

The path toward a deal became much easier last week, when LSU announced Miles had agreed to a lump sum of $1.5 million of the remaining $6.5 million he was owed under terms of his buyout.

"Absolutely," Miles said, when asked whether he always planned on coaching again. "The further I got away from it the more I desired it. I was prepared for a lifetime to be a coach, and 10,000 hours supposedly makes you an expert. I think I'm closing in on that 10,000 hours."

The Jayhawks, who lost to sixth-ranked Oklahoma on Saturday to leave Beaty with a 6-31 record in three-plus seasons, will finish out their year — and Beaty's tenure — Friday against Texas

Miles has been out of coaching since 2016, when he was fired by LSU after a 2-2 start that left him with a 114-34 record with the Tigers. His support among Tiger fans had waned considerably in a span of just a few years, even though Miles won at least 10 games in seven of his 11 full seasons, twice reached the national title game and beat Ohio State for the '07 championship.

The most common criticism was Miles had been unable to keep up with the times, sticking to an unexciting and often-stagnant attack during college football's offensive explosion.

"I did very much look to myself and what I needed to change to make us more successful as an offensive coach," Miles said. "We did have an inspection but did not take a negative view."

Miles had inherited a winner when he was chosen by LSU to succeed Nick Saban in 2005, but he had proven with Oklahoma State that he could also build a program from scratch.

The Cowboys had just one winning season in 12 years before Miles, their program in similar shape to the Jayhawks now. But the longtime college and pro assistant thrived in his first head job, finding some overlooked prospects, developing them and eventually reaching three straight bowl games. He was 28-21 at Oklahoma State.

"I have no doubt that Coach Miles will have an immediate impact on our football program and our university," Chancellor Douglas Girod said in a statement. "Together as Jayhawks, we will rebuild our football program the right way, winning championships and continuing to graduate young men of character."

The Jayhawks haven't had a winning season or reached a bowl game since 2008, the year before Mark Mangino was forced to resign under pressure. Turner Gill won five games over two seasons before getting fired, and Charlie Weis managed six wins in two-plus seasons before he was let go.

The program has bottomed out since a 12-1 campaign in 2007, which included a victory in the 2008 Orange Bowl against Virginia Tech.

That season remains the KU’s only year with a winning conference record since 1995.

Miles only had one season at LSU without a winning conference record (2008) despite playing in the rigorous SEC West.

The Tigers were 62-28 in conference under Miles and averaged more than 10 wins.

The Jayhawks were woefully short on scholarship players, their facilities were decrepit, their fanbase had grown apathetic and the even the administration seemed to have little interest in supporting football. Beaty's contract lagged far behind his peers financially, and there was little money at his disposal for hiring assistant coaches and other administrators.

Long has promised to rectify those issues, even announcing that a $300 million renovation to aging Memorial Stadium had been put on the backburner while money was invested in the program itself.
The first and most important investment came in the head coach.

His contract also includes a one-year, one-time rollover extension that is triggered by winning six games in a season, and benefits such as a country club membership and moving expenses.

"The national profile of four football program has improved immediately and dramatically today," Long said, "but more importantly we have a leader that loves the game of football, believes in what the game does to build character in young men and prepares men for what happens after football."