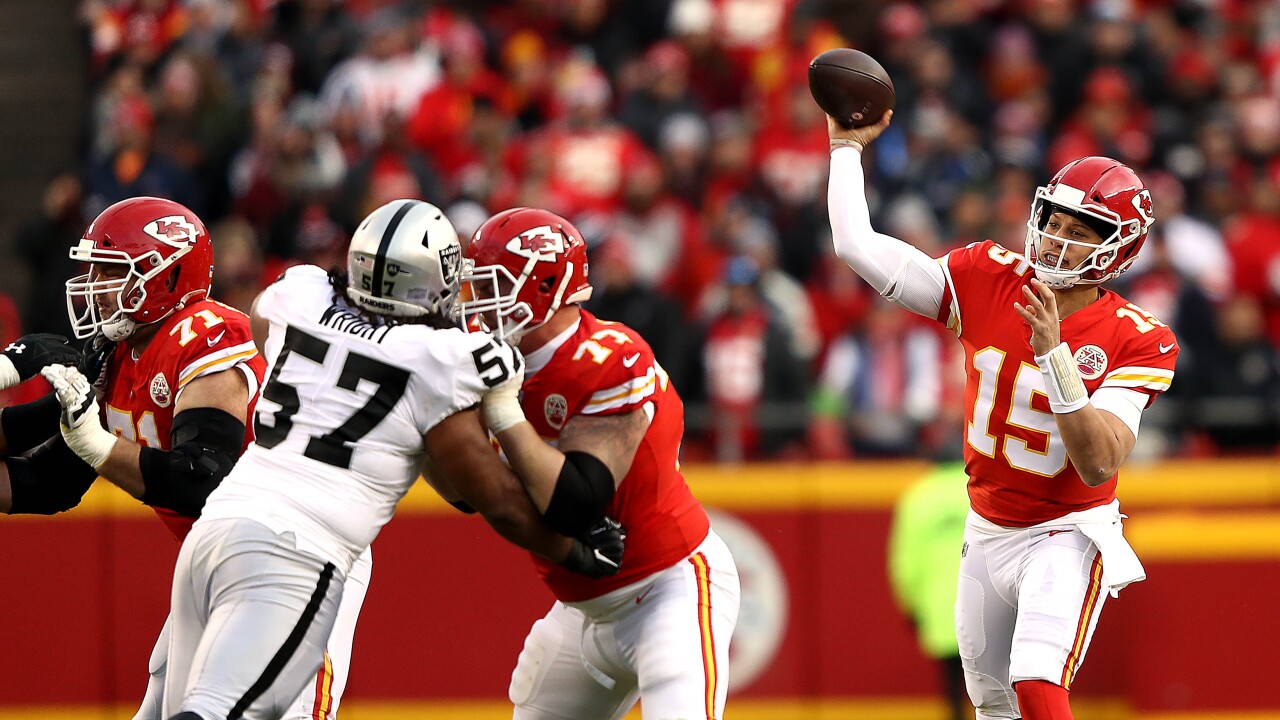 KANSAS CITY, Mo. — There are lots of unknowns for the Kansas City Chiefs (12-4) heading into Saturday afternoon's AFC divisional playoff game against the Indianapolis Colts (11-6).

Arrowhead Stadium is the loudest stadium in the NFL. However, that may not be enough to stop a team that's won 10 out of their last 11 games including a 21-7 AFC wildcard playoff win against the Houston Texans. Colts quarterback Andrew Luck threw for 39 touchdowns in the regular season. Chiefs quarterback Patrick Mahomes is the only quarterback with more TD passes (50) than Luck.

It's well-known what Mahomes can do on the field. However, a big question has to be whether the Chiefs can get adequate pressure on Colts quarterback Andrew Luck. If not, it's going to be a long day for the Colts defense and their oft-maligned secondary.

Indianapolis has allowed the fewest sacks (18) in the NFL. Protecting quarterback Andrew Luck was a huge problem for the team in years past. However, the Colts offensive line is considered one of the best in the league. By comparison, the Chiefs are tied with Pittsburgh for the most sacks (52.0) in the NFL. Something has to give.

Andy Reid is well aware of the Colts ability to protect their quarterback.

"How great are they at that? They are phenomenal at that. Andrew Luck, it's great to have him back in the game and going. He's a had a great year and you've got to stay persistent with him. I'm not going to sit here and tell you we're going to do this and that. But, you've got to bring your best against and do the best you possibly can every play," Reid said.

"He's going to get you every once in a while. But, you've got to make sure you get him more than he gets you. But, he's got a lot of good players around him. That offensive line, people can argue with you that it's the best in the National Football League. You look at the receivers, they've got good receivers. They've got good tight ends. You go all the way around, their running backs. You've got to bring your best. That's what the playoffs are all about. This is the best in the National Football League, which is the best in the world. And, you have an opportunity to do that. That's the exciting thing. But, you better bring your best every play," Reid said.

But, this game goes deeper than numbers. It's more psychological for the Chiefs organization, players and their fans.

The Chiefs' playoff woes have been well-documented. They have only won once in the playoffs since 1994. And, they're 0-4 all-time, in the playoffs, against the Colts, and have had some pretty epic losses. That would include Indianapolis coming back from 28 points down to stun Kansas City 45-44 in the 2013 AFC wildcard playoff game at Lucas Oil Stadium in Indianapolis. That was the second largest playoff comeback of all-time.

"They're a good football team. And, like I said before, every year is different in this league. And, every team is different," Chiefs head coach Andy Reid said during his weekly press conference early Monday afternoon. "You don't spend a lot of time [dwelling on the past]. You get ready for the game, go through the process of getting ready for it. I think that's the most important.

"You move on. Those are history. You don't go back on that. You are always moving forward in this thing and that's what we are doing," Reid said.

Aside from that, quarterback Patrick Mahomes is starting the first playoff game of his career. He has never played with the kind of pressure that he's about to face in the postseason. Many fans are looking to Mahomes as the potential savior for a franchise that hasn't been able to get over the hump in the last quarter-century.

Total Playoff Wins of QB's that are still in the playoffs

Andy Reid talked about whether or not the moment was too big for Mahomes.

"So far, I haven't seen anything that is too big for Pat. I'm not worried about that. He's going to get himself ready just like he does every week to play against a good football team. I don't think he is wired the other way," Reid said. "I'm not predicting anything. That's not what I am doing here. I'm just telling you matter of fact, that is how he is wired and how he goes about his business."

The entire league has taken notice of what Mahomes has done including the Indianapolis Colts. During the Colts' Monday afternoon press conference, Colts defensive coordinator Matt Eberflus spoke about the challenge his defense has in stopping Mahomes on Saturday.

"The first thing that jumps out to you is arm talent. The great quarterback of the game, if you go all the way back to the beginning and watch those guys, the two things they have is timing and accuracy," Eberflus said. "They have varying degrees of arm strength. But man, the timing at which they throw the ball and it gets there on time and the accuracy which they have. This is what this young man has.

"Then, it's been obviously talked about a lot, his athletic ability to escape, him throwing from different arm angles and all those things, he certainly has that. But, he has the attributes you want in terms of timing and accuracy," Eberflus said.