Don't look now but Mahomes has started a new trend 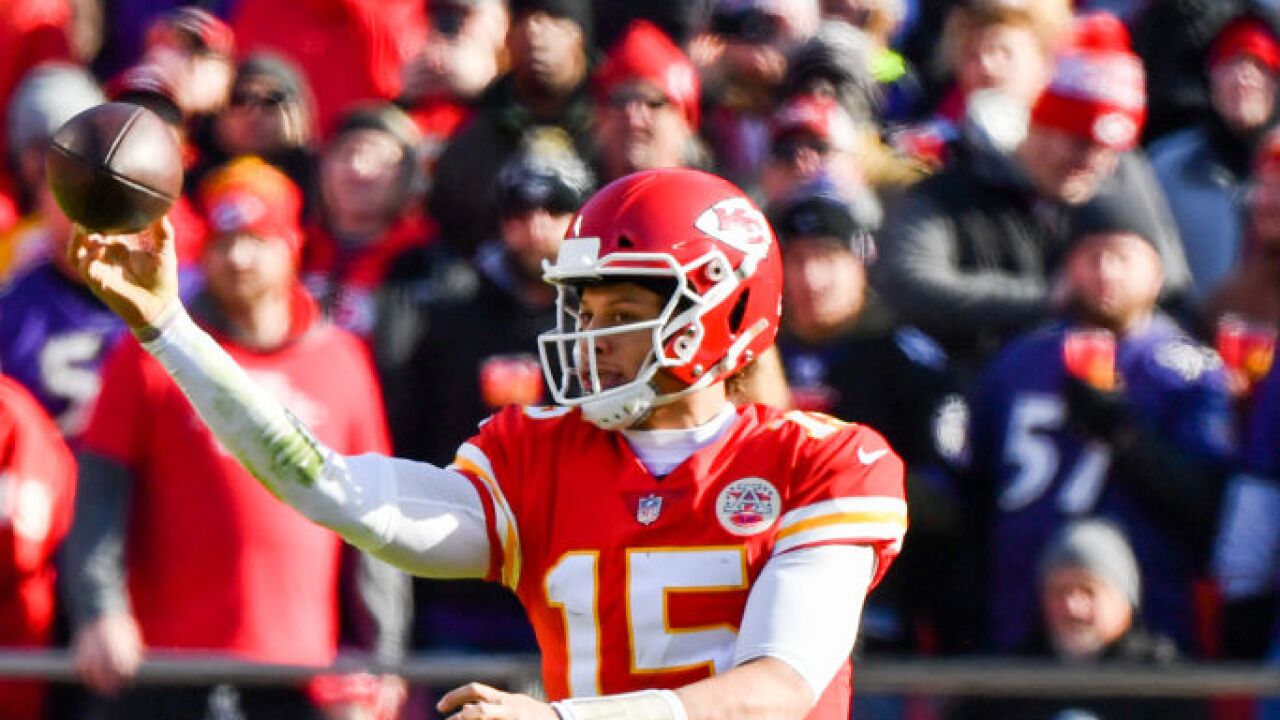 KANSAS CITY, Mo. — The no-look pass: a staple of many a hot dog on the basketball court.

Often a way to simultaneously make an opponent look silly and yourself look sweet in hoops. When completed, it results in “ohhhhs” from the crowd, followed by “ahhhs” if it leads to a basket.

But it can serve a purpose in basketball, catching the defense off-guard by holding your opponents in position without giving away your intentions. Most defenders are watching the ball handler’s face. Makes sense.

But in other sports? Unnecessary. Impractical. Not worth trying it.

“I just kind of started doing that as I got into the last years of my college career.”

You heard him right. He’s not talking about basketball. He’s not discussing a pick-off throw. (Mahomes has played a ton of baseball.)

“We started doing it in practice and messing around with it,” said Mahomes about his days at Texas Tech with his back-up Nic Shimonek. “I realized it was a tool I could actually use in games.”

In NFL games, as it turns out!

By now, even the most casual of Chiefs fan probably knows what I’m referring to: a pass play toward the end of the first half of the Chiefs game with the Ravens on Sunday.

Demarcus Robinson was crossing in front of Mahomes from right to left. D-Rob had his man beat by a step but there was an extra defender in the area who could pose problems. So Mahomes stared right, and then whipped a pass across his body to the left hitting Robinson in stride.

“I was looking and I saw D-Rob about to come open and I needed to move the safety over to the right, so I just trusted D-Rob was going to be there and I put it out there. He made a great play on it,” said Mahomes.

Sorry, Patrick, the modesty is endearing but nobody is talking about the “great play” Demarcus made. It’s all about you, Pat.

“I worked real hard with him on that,” said Andy Reid Monday to a chorus of laughter.

“This is the NFL and he is doing it. That’s something to do it in practice, but then you start throwing it in a game and then a game against the number one defense in the National Football League, that is a little different.”

It is a lot different.

This is the NFL. First-year starting quarterbacks are supposed to wet their pants and then stare down a receiver from the moment they break the huddle.

The Chiefs have Jason Kidd out here on the football field.

So let’s get back to the basketball no-look. Typically it’s a pass from the perimeter to a player down near the basket. At most it’s 15 feet. That’s only five yards.

Sunday, Mahomes threw his no-look pass standing on his own 22-yard-line. Robinson caught it on the 42-yard-line. Accounting for the angle, that’s more than 20 yards. Which is over 60 feet!

In hoops a turnover isn’t the end of the world. There are, like, 30 of them per game.

In football, a turnover quite often spells the difference between winning and losing.

“I haven’t thrown an interception yet. Hopefully I won’t,” said Mahomes. “I think I tried to throw one earlier in the season and I think it was Tyreek stopped running because he thought I was going to throw it back to the right.”

It is a two-party system this football no-look pass thing. It’s meant to freeze defenders and not your own receivers.

“I know that the guys are going to know what I’m thinking and trust that they are going to keep running the route the same way and then I put the ball out there for them.”

And there’s no hint that Patrick’s superiors see it as any sort of showing off.

“When you really look at what effect it had on the defense, there was a guy right underneath the route,” said Reid. “How do you go explain that to your coach? ‘He was looking over here, but he threw it over here.’ They are going to think you are crazy. But it worked.”

Big Red’s always been a fan of new wrinkles. And now he’s got the coolest of trends.