Father, son to both take field Saturday in Arrowhead reunion 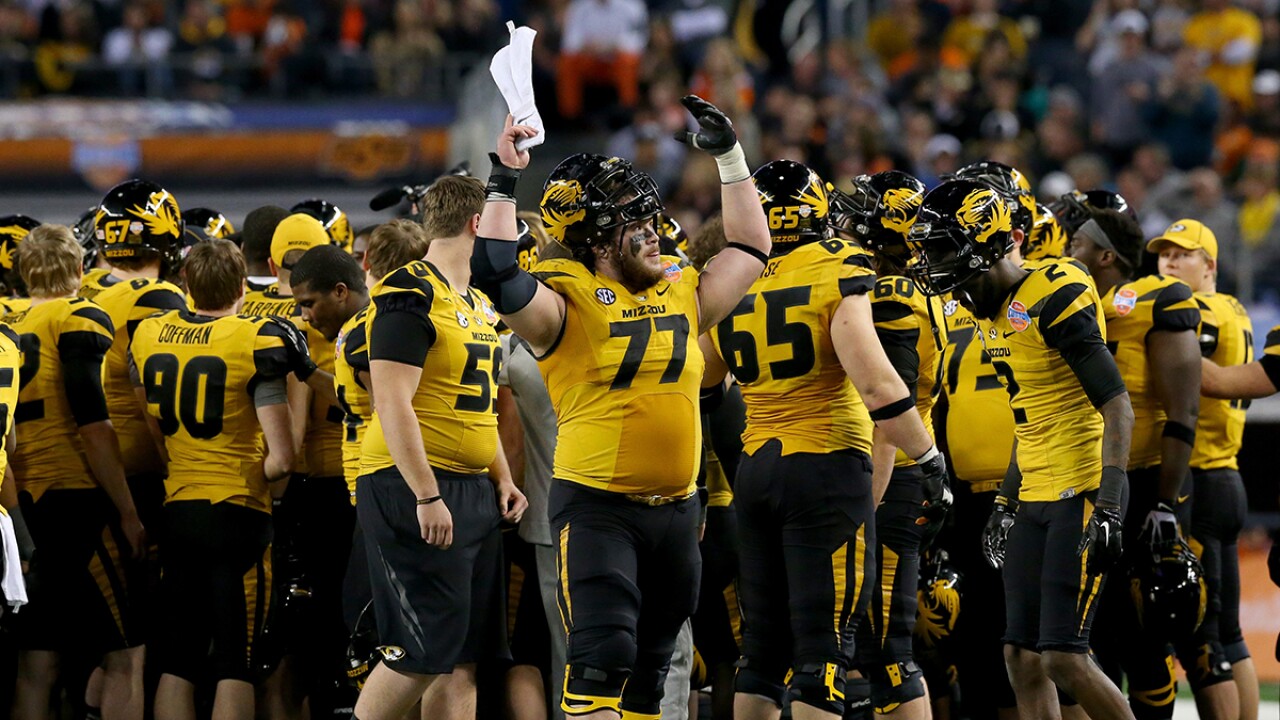 Ronald Martinez/Getty Images
ARLINGTON, TX - JANUARY 03: Evan Boehm #77 of the Missouri Tigers reacts in the second half while taking on the Oklahoma State Cowboys during the AT

KANSAS CITY, Mo. — I guess I can say I've known Evan Boehm since he was a sophomore in high school. I had known his dad and high school head football coach -- Royce Boehm -- before that as Lee's Summit West was quickly becoming a power in Kansas City and in Missouri, even though the Titans were a very new school.

Evan was dominant. Not as a quarterback. Not as a running back. Not even as a standout linebacker.

No, Evan was an offensive lineman, a position rarely acknowledged outside of the huddle.

By his junior year, he was not only being called the best player in the city -- again, as an offensive lineman -- but Lee's Summit West, led by his dad Royce, was on it's way to another state championship.

Evan would also win state wrestling and discus titles as a junior.

He had more than made a name for himself. And when his senior season went much like his junior season -- pancake blocks and paving the way for the city's most feared running attack -- he won the Simone Award.

At the time, I was on the Simone Award (given to Kansas City's best high school football player) committee that helped determine nominees (coaches and media vote for the winners) and it was cool to see this, again, offensive lineman, receive the attention usually only reserved for quarterbacks, running backs, and an occasional wide receiver.

Of course, Boehm has gone on to further earn that honor. He was a four-year starter at Mizzou. He was selected by the Cardinals in the 4th round of the NFL Draft.

In the meantime, his dad Royce had to retire from coaching due to health concerns. That's okay. More time to see Evan. Also, another opportunity opened up: to work for the NFL at Chiefs games on the chain gang.

You know the chain gang, the guys who set the first down markers and have another marker along the line of scrimmage. They run out there and measure when the spot is close to a first down.

"Once I retired, they had somebody retire off the sidelines and they said 'Hey would you like to come and join us?'" said Royce. "And I said 'My gosh, heck yes.'"

Royce joined the crew a few years ago and has been doing it ever since, for about as long as Evan has been in the NFL.

"All my buddies I have on other teams have been like 'Hey, I saw your dad today and talked to him a little bit' and I'm like 'Oh that's cool,'" said Evan Boehm.

But this August, it became apparent to Evan that his NFL days could be in jeopardy. That's when he called his dad and asked him to come out to Phoenix.

Royce gladly joined Evan. And, turns out, Evan was wrong ... for a day. He made the Cardinals initial 53-man roster before being cut the very next day.

His agent, Tom Condon, started making phone calls. They found interest in Evan from the Rams and Colts and Cardinals for practice squad duty.

He then chose the Rams and Royce drove Evan's truck to LA to Evan's new home.

For several weeks Evan was on the Rams practice squad.

Then the Colts called again. Only with a roster offer this time. Evan had found a new home. And with one of the best offensive lines in the NFL. Immediately after he arrived in Indianapolis, the Colts starting center went down and Evan has started four games since. The Colts have won three of them.

"It has been a journey but I think now it's been a blessing in disguise," said Royce.

And then they won last week. And now he's back home to play at Arrowhead with, of course, his dad on the field with him running chain gang.

"I guess you can call it a front row seat," said Royce.

"I'm in a better spot now and what better game to be playing in than in Arrowhead," said Evan.

It will be a special day for the family. The Boehm's have always been Chiefs fans. Heck, Evan has been to a couple Chiefs playoff games as a fan.

But Saturday they'll both be wearing blue. Evan for the Colts. Royce for the NFL.

And, in the end, the result won't matter.

"Before the game, we'll say 'What's up' to each other, maybe take a picture, do something," said Evan.