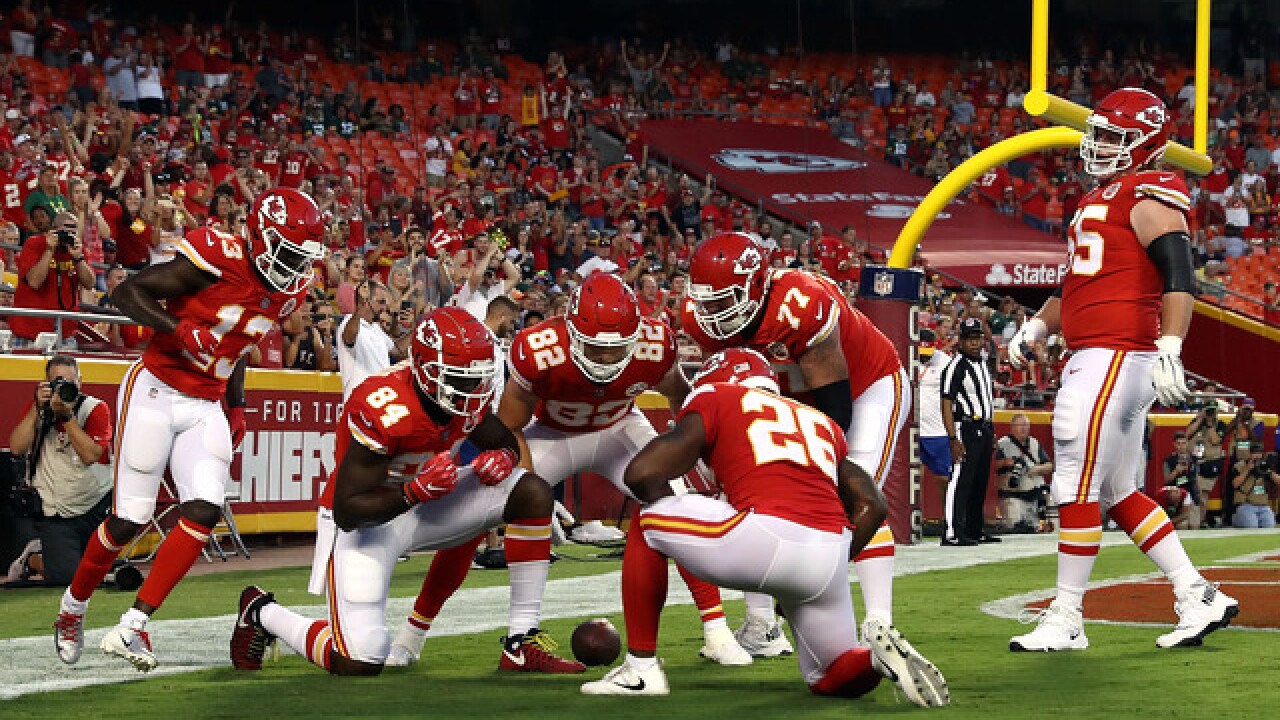 Copyright 2018 Scripps Media, Inc. All rights reserved. This material may not be published, broadcast, rewritten, or redistributed.
Jamie Squire
<p>KANSAS CITY, MO - AUGUST 30: Tight end Demetrius Harris #84 of the Kansas City Chiefs celebrates with teammates in the end zone during the 1st quarter of the preseason game against the Green Bay Packers at Arrowhead Stadium on August 30, 2018 in Kansas City, Missouri. (Photo by Jamie Squire/Getty Images)</p>

The biggest stars to play for the Green Bay Packers and Kansas City Chiefs on Thursday night won't be around for the season opener, and it won't be because they're backups about to get cut.

Demetrius Harris caught an early touchdown pass for Kansas City, and Aaron Jones ran for 34 yards and a score for Green Bay, then the Chiefs rallied in a game of backups and also-rans for a 33-21 victory in the preseason finale for both teams.

Harris, expected to back up Travis Kelce at tight end, is suspended for the season opener for violating the NFL's substance abuse policy. And Jones, the Packers' backup running back, is out the first two games for violating the same policy during the offseason.

They were two of a handful of recognizable names to even take the field at Arrowhead Stadium.

Packers coach Mike McCarthy and Chiefs counterpart Andy Reid had seen enough from their starters in training camp and the preseason, so they turned the game over to a plethora of backups trying to make the team -- or, at least latch onto the practice squad when rosters are trimmed this weekend.

"It was great to see these young guys in there, give them an opportunity to play," Reid said. "They made (general manager) Brett Veach's job hard these next couple of days."

Rookie safety Armani Watts intercepted two passes , and Makinton Dorleant returned another pick for a touchdown, as the Chiefs' defense finally made some plays. Chad Henne, Matt McGloin and Chase Litton were all solid under center for Kansas City as Patrick Mahomes watched from the sideline, and undrafted free agent Byron Pringle had four catches for 122 yards before leaving with a hamstring injury.

Their only real starter to play, Harrison Butker, was perfect on four field-goal attempts.

"We've got a lot of depth, especially at wide receiver, tight end and running back. Those guys are starters on other teams," Henne said, "and they showed it out there today."

DeShone Kizer started for Green Bay and was 5 of 7 for 57 yards with a touchdown and a pick. The 2017 second-round draft choice of the Browns, Kizer is expected to back up Aaron Rodgers after the trade of erstwhile backup Brett Hundley to the Seahawks earlier this week.

"The quarterback focus was to get DeShone two series.  Obviously he had the high throw on the first series," McCarthy said. "We definitely accomplished that and it'll be a good tape to evaluate."

The Packers actually jumped to a 21-10 lead, but the Chiefs began to force turnovers against third-string quarterback Tim Boyle. McGloin and Litton were able to lead scoring drives, and Dorleant's pick-6 early in the fourth quarter put an exclamation mark on their comeback victory.

"It's a huge confidence boost," Watts said, "having a bunch of young guys making plays out there, our first year, getting out there and showing what we can do and contribute to this team."

TRADE NEWS
The Chiefs agreed to trade OL Parker Ehinger to Dallas for CB Charvarius Ward, a person familiar with the deal told The Associated Press on Thursday night. The person spoke on condition of anonymity because the deal was not expected to become official until Friday, a day before roster cuts.

HOME COOKING
McCarthy allowed most of his starters to remain in Green Bay rather than travel for a game in which they wouldn't play. That included Rodgers, who a day earlier signed a four-year, $134 million extension that could keep him with the team through the 2023 season.

INJURIES
Among the Packers headed into the season with injury questions are LBs Oren Burks and WR Jake Kumerow, both of whom have shoulder injuries, and RB Devante Mays, who did not play against the Chiefs with a hamstring injury. Kansas City was without SS Eric Berry, who has missed most of camp with a heel injury and whose status for the opener remains unclear.

NATIONAL ANTHEM
No demonstrations were evident during the national anthem.