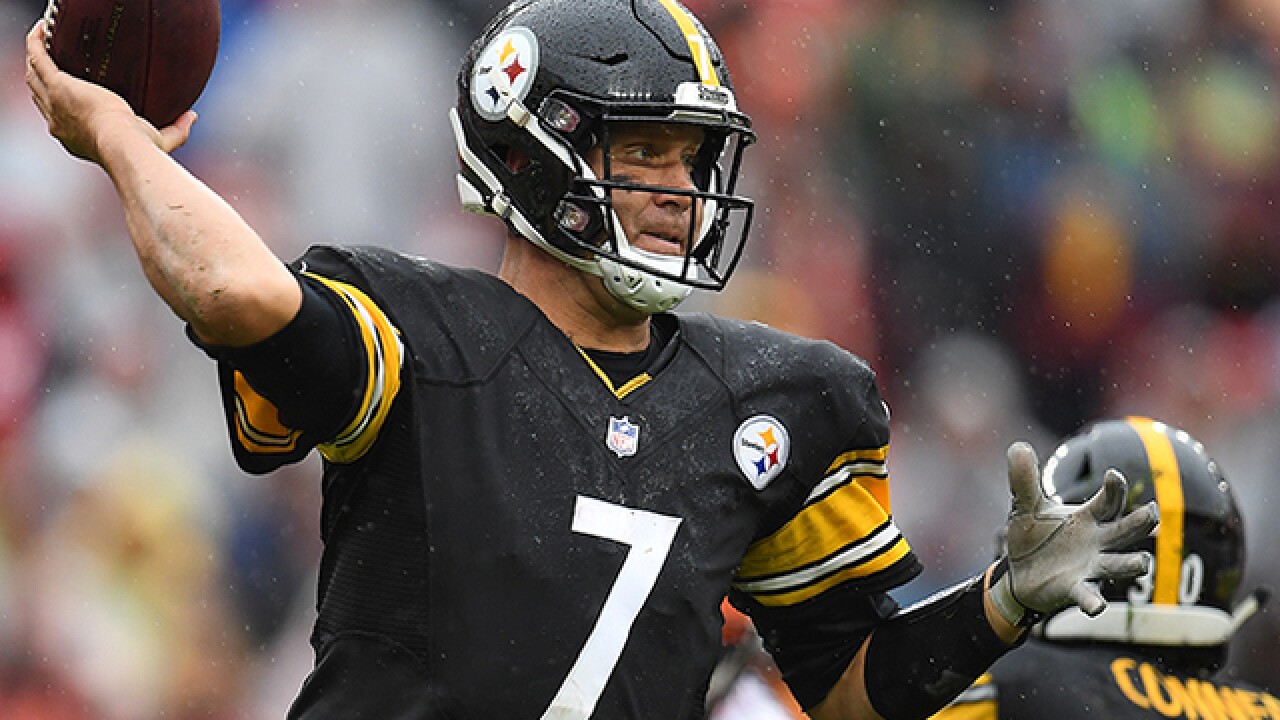 Copyright 2018 Scripps Media, Inc. All rights reserved. This material may not be published, broadcast, rewritten, or redistributed.
Jason Miller
<p>Pittsburgh Steelers quarterback Ben Roethlisberger threw a pass during the fourth quarter Sept. 9, 2018, against the Cleveland Browns at FirstEnergy Stadium in Cleveland.</p>

KANSAS CITY, Mo. — The Kansas City Chiefs walk into the unfriendly confines of Heinz Field on Sunday in Pittsburgh, Pennsylvania.

During a high-noon showdown, the Chiefs get the chance to find out how well they stack up in terms of mentality, execution and desire against one of the top teams perennially in the AFC.

The Steelers are a team that has haunted the Chiefs during Andy Reid's tenure in Kansas City.

The offense has scored an average of 15.6 points in five previous games under Reid, four of which were losses.

The games have been physical and featured lots of mistakes from the Chiefs, which the Steelers have taken advantage of in a series of close games.

Here are a few things the Chiefs must do to claim the franchise’s first victory in Pittsburgh since a 24-19 win Dec. 21, 1986, at Three Rivers Stadium.

Ben Roethlisberger is a quarterback you do not want escaping the pocket. The pass rush needs to use a contain method and maintain rush lanes. Ideally, the defensive line needs to stay even with their rushes and have a spy waiting if there is a breakdown in the four rush lanes. Roethlisberger is at his best when the blitz is coming or he is able to buy time outside of the pocket.

When Roethlisberger sees the blitz, he attacks one of two ways. He wants to push the ball deep vertically if there is a single high safety or he wants to run a route combination with a deep dig route.

The key when showing a blitz is to drop into variations of zone coverage on intermediate route options.

Successful opponents have baited the Steelers’ offense into dig routes with an underneath zone that drifts back towards the route.

Roethlisberger believes in his arm and his ability to stand tall in the pocket despite taking hits, but zone coverage forces him to hold the ball longer and allow the rush to collapse in on him.

If a team wants to bring a blitz successfully, delayed blitzes through the a gaps have proven to be the best. Roethlisberger was the third quickest in the NFL at getting the ball out last week with an average of 2.44 seconds, significantly faster than Patrick Mahomes (2.91) and even Aaron Rodgers (2.96).

Second-year running back James Conner may not have the running style or patience of Le’Veon Bell, who is continuing his contract holdout, but he is a bruiser who wastes little time after the snap.

Conner appears to have dropped some weight and is more explosive this season hitting the hole. Unlike Bell, he prefers to make one cut and get going.

Conner doesn't hesitate. He wants to hit the hole and head up field. He can be 10 yards up field in the blink of an eye. The Steelers are still running some of their traps, counters and power run game, but it doesn't demand the same patience in the run fits that Bell's style demanded.

Bell just waited out the defense until they made an undisciplined mistake. Conner doesn't have that same profile, but he’s still a potential mismatch out of the backfield as a receiving threat, just like Bell.

Conner will make the Chiefs pay if they elect to match him up against Ragland or an outside linebacker dropping into zone coverage.

The Chargers in the second half threw a lot of switch routes to get the ball to Keenan Allen and Melvin Gordon. The Steelers have attacked Sutton with a similar concept on a routine basis in recent years.

Pittsburgh has forced the defense to play off coverage against Brown and clear out space for him on his slant routes.

Once the defense bites on that, Brown adds in the slant-and-go, which has been effective against the Chiefs as well. The Steelers also like to utilize the tight end Jesse James down the seam and on skinny post out of play-action.

Tyreek Hill put the league on alert with his seven catches for 169 yards and two touchdowns last week.

Defensive coordinators now know what Patrick Mahomes and Hill are capable of together. Good teams will try to neutralize Hill’s speed — using bracket coverage, combo coverage and by flooding his zone to take away the quick-strike passes.

The windows will become much tighter for Mahomes and the Chiefs, which will require some creativity to get the ball in Hill's hands. This should allow more opportunities for Travis Kelce, Sammy Watkins, Chris Conley, DeMarcus Robinson, Demetrius Harris and Kareem Hunt to take advantage of the reduced coverage they might see.

Of course, a championship-caliber defense will not let Kelce and Hill beat them, so it will be up to Mahomes and the receivers listed above to force them to evolve. The Steelers also struggle with well-timed combination routes and bunch formations.

5. Mahomes will be tested with the zone blitz

The Steelers are well known for their zone blitz concepts.

They disguise where the blitz is coming from pre-snap as well as any NFL team, leaving the quarterback with no idea where to expect pressure somEtimes. Pittsburgh wants to create doubt in the quarterback's mind to speed up reads, disrupt timing and consistently get them on edge.

Quarterbacks who go to a hot route based on the blitz he is expecting but that doesn’t come are susceptible to throwing a pick into zone coverage. It’s of particular concern, because Cameron Erving had some trouble at left guard with stunts last week.

6. Attack the right side relentlessly in the run game

The Steelers are vulnerable with nose tackle Javon Hargrave and left defensive end Stephon Tuitt. There is an opportunity to utilize combo blocks on both of them along with a pulling tight end, guard or fullback and churn out 4 to 5 yards per carry.

Pittsburgh had trouble with draws, stretch plays to the right side, and maintaining discipline on cut-back lanes on the right side. The Chiefs will need to get Kelce, Harris, Anthony Sherman and Alex Ellis involved in this effort but there is a big opportunity to gash the Steelers in the run game with combination blocking to the second level.

The Chiefs have an opportunity to hold tiebreakers against four potential AFC playoff contenders — the Chargers, Steelers, Jaguars and Patriots — during the first six weeks of the season. This game will serve as a great barometer for where the team is at versus the best in the AFC, but it could have even bigger implications come week 17.

Nick Jacobs can be found on Twitter: @Jacobs71 and can also be heard on the 4th and 1 podcast brought to you exclusively by 41 Action News. 4th and 1 is available on iTunes, Google Play  and TuneIn.