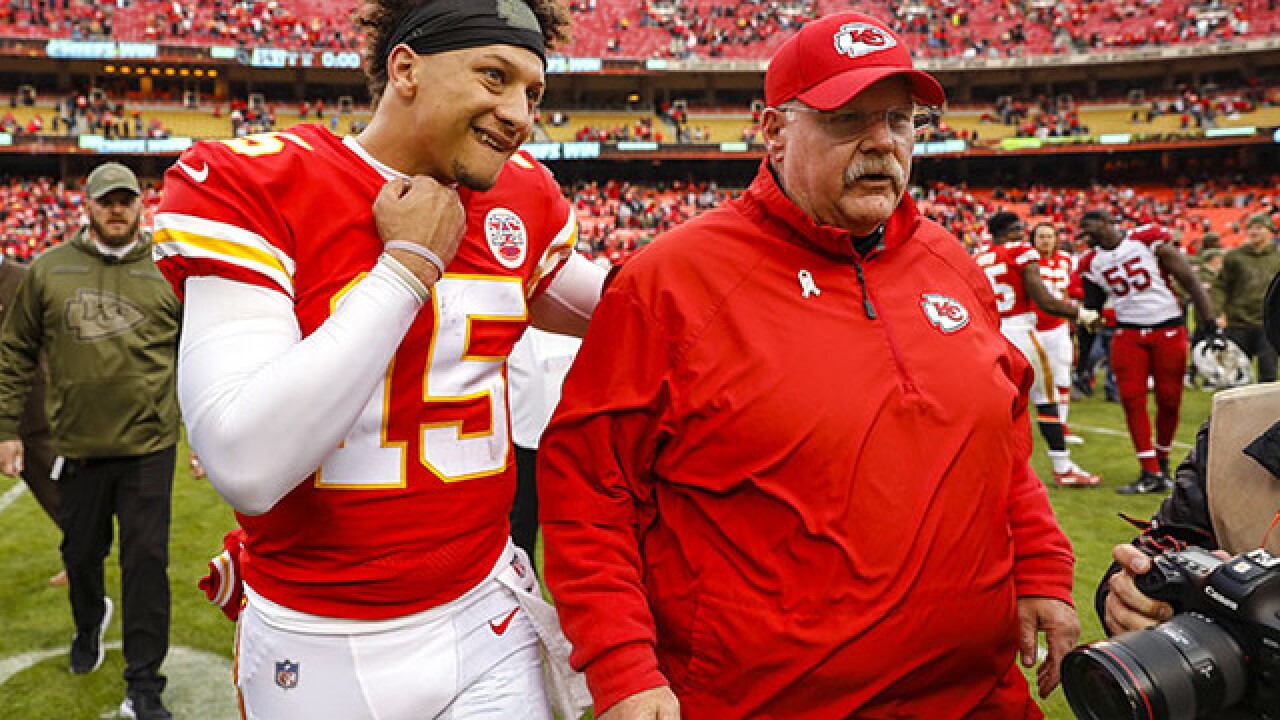 Copyright 2018 Scripps Media, Inc. All rights reserved. This material may not be published, broadcast, rewritten, or redistributed.
David Eulitt/Getty Images
<p>Kansas City Chiefs quarterback Patrick Mahomes (left) — shown here walking off the field after a win Nov. 11, 2018, against the Arizona Cardinals at Arrowhead Stadium (and possibly discussing dinner plans) — admitted to eating ketchup on just about everything, including steak and mac-and-cheese. But that's just fine, according to 41 Action News sports director Mick Shaffer.</p>

KANSAS CITY, Mo. — Just so you know, I don’t have a dog in this fight.

I used to eat it with French fries along with some foods I didn’t like as sort of a ketchup-coating to make it go down easier, but somewhere along the line I lost my love for ketchup — probably once I learned tomatoes were involved.

* I once participated in the condiment race at Kauffman Stadium as "ketchup." I won, of course, but I didn’t like it one bit for what that meant for mustard’s yearly total.

This is a bigger admission than Kansas City Chiefs quarterback Patrick Mahomes this week spilling to an ESPN writer that he loves ketchup and even eats it on steak.

I would submit that far more people douse a slab of meat with what’s thought of as a hot dog topping than there are people who genuinely don’t like steak in the first place.

Then again, nobody cares about my taste buds, except for my in-laws, who can never seem to remember that I don’t like steak even after 18 years of marriage. They’re surprised every time.

I wish I liked steak. It looks good. And I hate having to explain it to people.

I love chicken fried steak. Does that count?

Anyway, know that I’m not pro-ketchup nor pro-steak in the great "ketchup-on-steak" debate raging this week in Kansas City, so let’s examine.

"Maxim" magazine did an important piece of journalism back in 2012 with an article called “100 Foods to Eat with Ketchup." Let's recap:

"The Absurds" — with mustard, with mayo, in hot water to make soup, and egg salads.

So, "Maxim" — not exactly a bastion of decency — won’t even allow ketchup on a steak, though apparently it’s fine on Slim Jims and Reuben’s and pizza rolls.

What’s the deal? Well, it might be the perceived gap in nourishment quality between ketchup and steak.

Ketchup is given away in packets. If you don’t have enough, they’ll give away more.

“Why on earth would someone choose to cover up such a carefully crafted blend of prime beef with such a sweet, overpowering condiment?”  “The Meat Show” host and beef expert Nick Solares said when a similar controversy erupted involving President Trump.

It’s a good question, but there are plenty of plain steaks out there. There’s a difference between a steak from Stock Hill and a steak from Outback.

Ketchup can make the steak from the buffet at Golden Corral quite a bit better I would assume.

If you think we’re making a big deal out of Mahomes’ cut-of-beef preference, well, you’re right. But he isn’t the first public figure to be embroiled in this debut.

President Trump eats his fine steaks well-done and with ketchup (and you know he isn’t dining at Applebee’s). There has been an article or two written about that.

There also have been about 6,000 Reddit threads devoted to ketchup on steak.

The website The Daily Meal lists 30 Food Sins and coming in No. 5 — right between "Using Bottled Lemon & Lime Juice" (more of a Food Misdemeanor than sin if you ask me) and "Putting Mayo on Corned Beef or Pastrami" (guilty) — is "Putting Ketchup on Steak, Eggs, or Hot Dogs."

And that’s where the problem exists.

If a rule against ketchup on steak is going to lead to a mayo ban on sandwiches or no ice in wine or no cheese on fish, it’s best to have no rules.

It’s necessary to push back here.

You may not prefer ketchup on your steak, but Mahomes isn’t shoving it your mouth.

It goes back to what I always tell my in-laws at a steakhouse: “Is chicken on the menu? If so, then they shouldn’t scoff at me for ordering it.”

Is steak on the menu? Is ketchup available? Yes and yes.

Then bathe your meat in ketchup, Patrick!

Don’t hide it anymore, a premise admittedly destroyed by sharing it with an ESPN writer.

But more importantly, don’t be ashamed of it.

In fact, if anyone can be a trendsetter in the ketchup-on-steak department, it’s Mahomes. Trump’s approval rating is only 40 percent. Mahomes is nearing triple digits, at least in Kansas City.

Maybe after a Super Bowl and winter full of ketchup-on-steak pictures from KC restaurants, dousing your porterhouse in Heinz will become the next big thing.

I mean, I doubt iced tea mixed with lemonade was popular before Arnold Palmer professed a love for it.

I can hear thousands of Chiefs fans saying to servers across the city, “Gimme the Mahomes."

Out comes the house’s very best T-bone and very best Hunt’s ... or Heinz, who tweeted at Mahomes that they would give him ketchup for life if he got 57 touchdowns.

Coincidentally, that number matches their Heinz 57 brand and would be a new NFL record.

Hey @patrickmahomes5, you give us 57 touchdowns, we’ll give you Heinz on your steak for life. https://t.co/UeZdmMZUnv

Look at Pat — overcoming his fears, admitting a faux pas, and now potentially benefitting from it.

Maybe odd food-eating habits aren’t that odd after all. There could be an entire marginalized community of ketchup-on-steak eaters out there who now have a voice.

Ketchup on steak is fine.

So is ketchup on macaroni and cheese, which Mahomes admitted being a fan of this week under questioning from local media.

Heck, let's just agree that ketchup on bacon is fine ...

Or perhaps we should not push it.