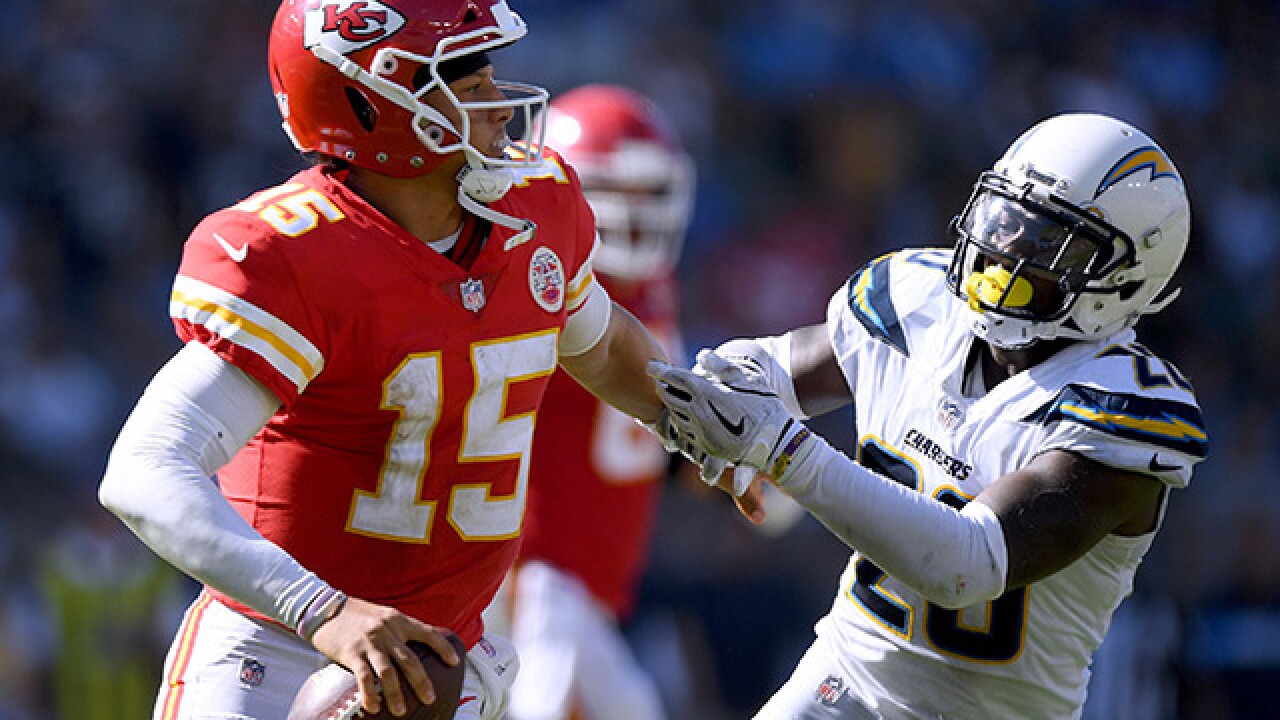 Copyright 2018 Scripps Media, Inc. All rights reserved. This material may not be published, broadcast, rewritten, or redistributed.
Harry How
<p>Kansas City Chiefs quarterback Patrick Mahomes fended off the rush of Los Angeles Chargers defensive back Desmond King during the fourth quarter of a 38-28 Chiefs win Sept. 9, 2018, at the StubHub Center in Carson, California.</p>

KANSAS CITY, Mo. — Patrick Mahomes set a high bar for himself during his inaugural game as the Kansas City Chiefs’ starting quarterback.

Playing the regular season finale last season at Denver was great for Mahomes’ development and experience, but it was a glorified exhibition game with no stakes.

Mahomes, 22, got chucked into the deep end of the NFL pool last Sunday as the Chiefs opened the season on the road against a Los Angeles Chargers team picked to win the AFC West.

He responded with an award-winning performance, finishing 15 of 27 for 256 yards with four touchdowns and no interceptions in a 38-28 victory.

That was good enough for Mahomes to earn AFC Offensive Player of the Week honors.

No pressure, kid, but there’s nowhere to go but down from here.

“I don’t know about that,” Mahomes said with a laugh during Wednesday’s weekly press conference. “It helped that we had a lot of guys that played well for us on the offense. Tyreek (Hill) had a great game, the offensive line played really well, and everybody just made plays. I’m glad I got the honor but it was kind of an offensive unit honor.”

Mahomes’ predecessor, Alex Smith, won the weekly award once in five seasons with the Chiefs, so it’s unfair to expect such accolades every week.

Still, that’s one heck of a way for Kansas City’s only first-round pick at quarterback since 1983 to kick off a new era.

“You have to keep going,” Chiefs coach Andy Reid said. “He understands that; he is wired that way. Plenty of room to improve and he knows it. He is working at it. … It is a nice honor, but you are only as good as that next game, so that is how that works.”

The next game presents arguably an even greater test.

The Chiefs have dominated the Chargers under Reid, winning nine straight games now, but the Pittsburgh Steelers have been a different story altogether.

The Steelers, who host the Chiefs for a noon kickoff Sunday at Heinz Field, have won six of seven games since 2011, including four of five games since Reid took Kansas City’s reins in 2013.

Mahomes downplayed revenge as a motivating factor in the Chiefs’ locker room, but there is a feeling among players who’ve been immersed in the rivalry in recent years that battling the Steelers represents more than a typical game.

He and the rest of the offensive line will be critical to Mahomes’ success in week two, and not just in the way every offensive line must protect every NFL quarterback.

Pittsburgh disguises its coverages as well as any NFL defense and brings some exotic blitzes that are tricky to detect and properly diagnose.

Mahomes makes the protection calls, while center Mitch Morse directs traffic up front from there. But it’s up to the entire offensive line to help Mahomes and Morse read the correct keys in making those pre-snap adjustments.

“This will be a nice challenge for (Mahomes) with the way they disguise, so that will be another good test for him,” Reid said.

It’s also one for which Mahomes is prepared.

“He studies, which is important when you are playing blitz teams,” Reid continued. “That’s what he needs to keep doing. He needs to keep looking at it and going through the different protections in your mind and how you are going to handle them and see them in practice. Then, you go play, and you don’t let them bog you down. You just go play and let your preparation take care of that for you.”

Mahomes understands that he’s far from a finished product — Reid expects massive growth through year four for his precocious QB — but progress already is apparent.

“I feel like I get better and better with the blitz protection every single week,” Mahomes said. “… I know Pittsburgh does a lot of that stuff, that’s kind of their thing, but we’ve played them a lot in these last few years, and you can kind of look back at the tape of how they wanted to try to go against us and how to figure out ways to combat that.”

Learning protection calls may be a work in progress, but Mahomes’ swagger and confidence — epitomized by the AFC Offensive Player of Week award — demonstrates that he’s already arrived in other ways.

“It’s crazy — just in terms of leadership, seeing him in the locker room talking or calling the play in the huddle with so much confidence,” Duvernay-Tardif said. “It’s what you want in a quarterback. You want him to be able to rally the whole offense behind him and go out there win some games, make some plays. That’s what he’s been doing so far.”