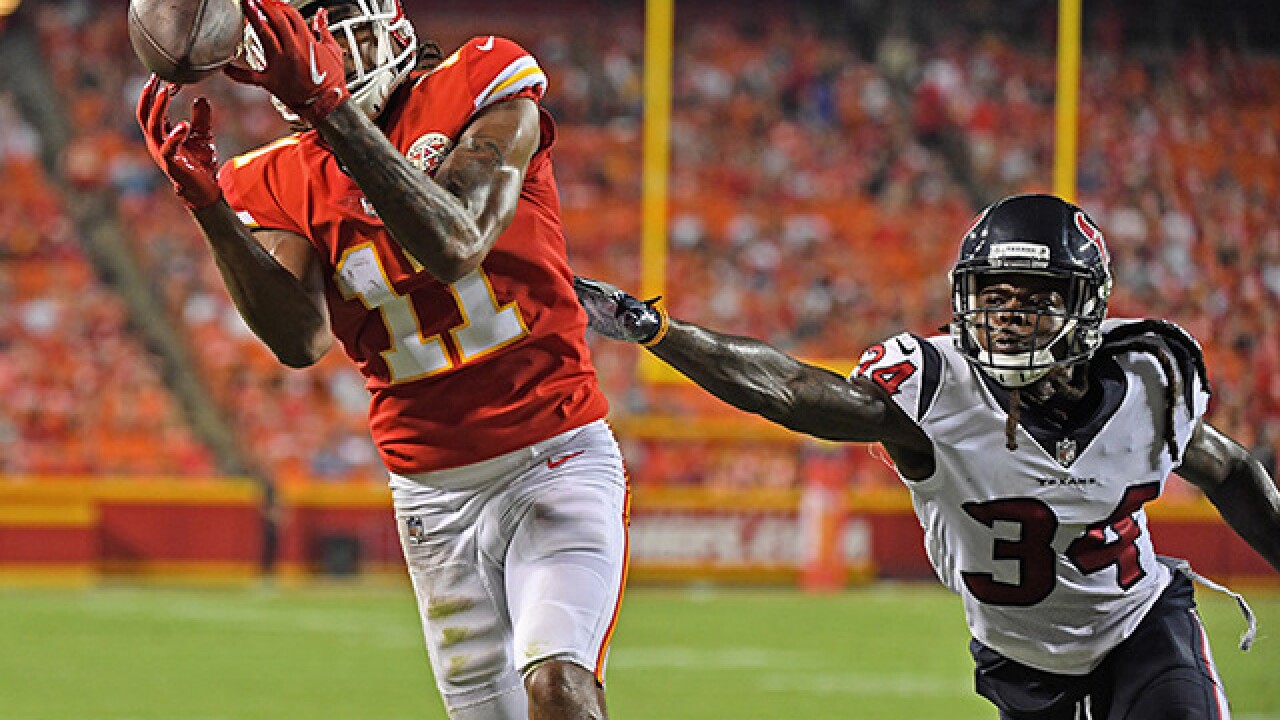 Copyright 2018 Scripps Media, Inc. All rights reserved. This material may not be published, broadcast, rewritten, or redistributed.
Peter Aiken
<p>After catching a touchdown in the playoffs last season, Demarcus Robinson's confidence has surged. He scored the only touchdown in the Chiefs' preseason opener and hopes to keep building off that.</p>

KANSAS CITY, Mo. — As a rookie two years ago, Demarcus Robinson was relegated to a special teams role.

He didn’t record a single target, much less a catch, with the Chiefs’ offense, but that started to change last fall.

Robinson made eight starts and finished with 21 catches for 212 yards.

He didn’t score a touchdown during the regular season, but Robinson added four catches for 57 yards, including a 14-yard touchdown reception in the closing seconds of the first half of the Chiefs playoff loss against the Tennessee Titans.

Now, Robinson — a former fourth-round pick from Florida who will turn 24 next month — hopes to make a serious impact in his third campaign with Kansas City.

And he got off to a good start Aug. 9 during the preseason opener against the Houston Texans, scoring the Chiefs’ lone touchdown — a 24-yard strike from backup quarterback Chad Henne — during a 17-10 loss.

“I wanted to come out and show the coaches I could make plays,” Robinson said. “… We had a double move, so I gave him a little hesitation about 5 yards off the line and it was a great ball.”

Officially, the touchdown doesn’t count, of course, having come in an exhibition game, but you wouldn’t know from Robinson’s reaction.

“A touchdown’s a touchdown and a catch is a catch,” Robinson said. “I’ll take them all, whether it’s preseason or playoffs, first game, championship or whatever it is.”

Besides, after scoring his first professional touchdown in the playoff last season, getting another in the preseason was confirmation for Robinson that he’s on the right track to be a productive player during the 2018 season.

“I definitely had a little confidence in myself, coming in from that touchdown against the Titans in the playoffs game,” Robinson said. “It just gave me a little boost and let the other team know I’m not a rookie anymore. I can come out and make plays.”

After the Chiefs’ first-string offense failed to generate any points in its two drives, Robinson was more than happy to give fans at Arrowhead Stadium a reason to cheer.

“Our first team struggled a little bit, so we were able to come out and give Chiefs Kingdom a little spark with the second group,” Robinson said.