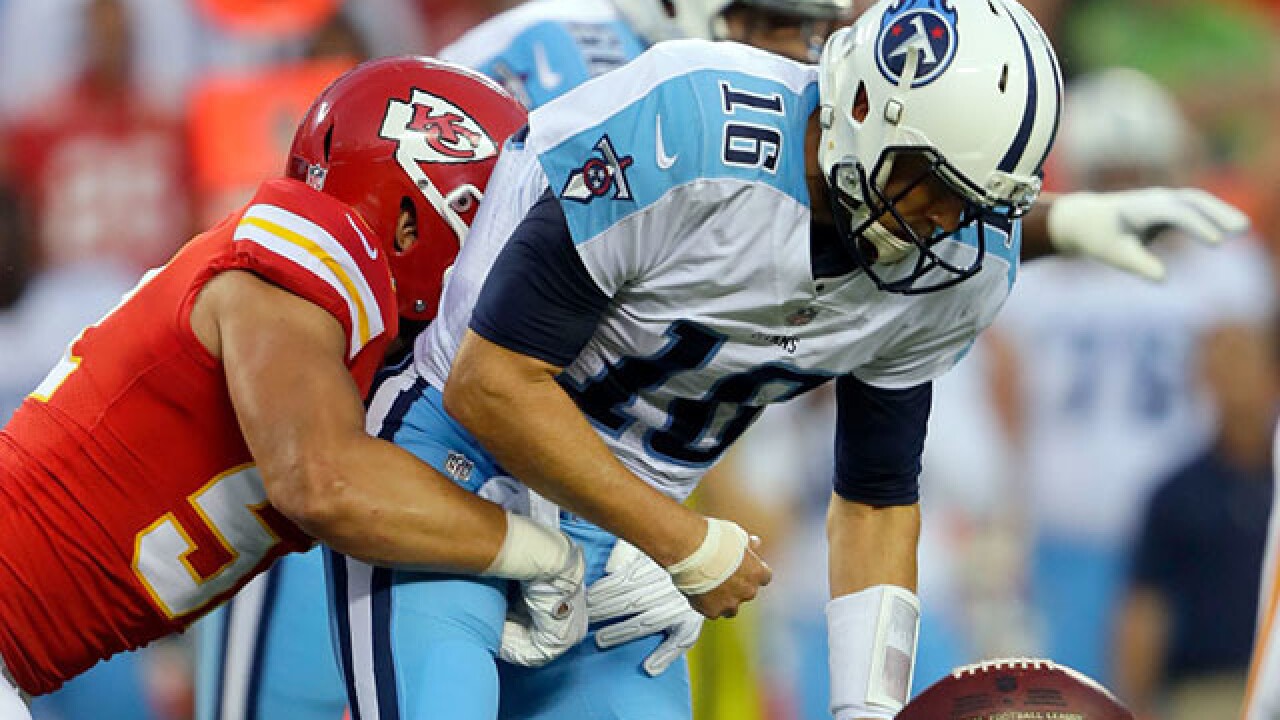 Copyright 2018 Scripps Media, Inc. All rights reserved. This material may not be published, broadcast, rewritten, or redistributed.
Jamie Squire
<p>KANSAS CITY, MO - AUGUST 31: Quarterback Matt Cassel #16 of the Tennessee Titans loses the ball as he is hit by outside linebacker Frank Zombo #51 of the Kansas City Chiefs during the preseason game at Arrowhead Stadium on August 31, 2017 in Kansas City, Missouri. (Photo by Jamie Squire/Getty Images)</p>

KANSAS CITY, Mo. -- Here’s the most important thing about the first Kansas City Chiefs preseason game Thursday night at Arrowhead against the Texans - you won’t remember it.

Not a darn thing about it. Zip. Zero. Nada.

Quick, who did the Chiefs play in last year’s preseason?

Give up? The Browns, Cardinals, Dolphins, and Falcons. “Oh yeah,” you say. “I remember that.”

No you don’t. Because I just made it up. I – a sports anchor who covered two of last year’s preseason games – cannot tell you who the Chiefs played in the preseason.

Look, I know your next-door neighbor Kyle wants to rain on your parade for the upcoming Chiefs season – after all, we’ve gone six months without football and no American should have to endure a drought that long – but he’s right.

None of this matters. Of course, you might counter with, “Does football itself matter, Mick?” And I would scoff and say, “Of course it does and why did I marry you?”

Why do we have preseason NFL games? Colleges don’t get exhibitions. High schools aren’t playing tune-ups against teams they could eventually face in the playoffs. Why then do the most experienced, most highly-skilled football athletes need FOUR preseason games?

In 2008, the Detroit Lions went 4-0 in their preseason games. Why is that significant? They went 0-16 in the regular season that year.

The coach knows it doesn’t matter. You should too.

“Cheer for no injuries.”

You should be excited for a Patrick Mahomes to Tyreek Hill 50-yard touchdown pass. You should applaud an Eric Berry interception.

But you should save your biggest ovation for every time all 11 Chiefs jog off the field.

Because nothing good can happen in the preseason – oh, I guess, if your name is Charcandrick West and you’re fighting for a spot on this roster then good things can happen – but lots of bad can occur.

The bad is called “injuries.”

And they can happen on every play. Sixteen quarters of meaningless football just tempting fate that all your knees and shoulders and heads will come out okay.

Just ask Tony Romo, who basically retired after a preseason injury in 2016.

Or Jordy Nelson who missed the entire 2015 season.

The Chiefs have been relatively lucky avoiding big preseason injuries over the years; however, one only need to look back to last preseason in Seattle when starting running back Spencer Ware lost his season to a knee injury. (You remember that, don’t you? See, only bad things result from the preseason!)

Look, I realize at times it seems like the coaches are just tossing the ball out there and letting them play. But that’s not what they’re doing.

Coaches spend all week immersing themselves in opponents’ game film, game-planning the best way to exploit the other team’s weaknesses and their own strengths.

There is a very detailed strategy to what they’re attempting to do.

But in the preseason? Yeah, they just toss the ball out there and let them play.

I’m fairly certain there are some Chiefs coaches (and plenty of players) who couldn’t tell you who they’re playing on Thursday night. (It’s the Texans, by the way, but no matter how many times I say it you won’t remember it.)

There will be zero film study of Deshaun Watson. No dissection of Houston’s vaunted defense. It will simply be a dress rehearsal to make sure everyone remembers their lines.

Unless you want the quickest watch party in watch party history. Andy Reid says the first team offense will get to play a quarter. Then again, it might get one series if he likes what he sees.

Sure, there might be some compelling battles amongst the number twos that will keep your interest, but they will only get a quarter, too.

And then after that it’s all guys who will be going pro in something other than football for the second half.

For as great and fun as the NFL is, it’s a big drop-off to watching the practice squad guys. Something else we don’t always remember from the last football season.

“Listen to none of this.”

And, finally, you’re free to throw all this advice out the window. Like Mahomes chucking one out-of-bounds to live another down (Who am I kidding? He’ll never do that.)

Football is back, after all, and whatever sliver of meaningless, who-is-that-guy?, pick-up game football we can get … we’ll take!

It may not count. We may not remember it. But that doesn’t mean we can’t look forward to it. And that’s what we’ve been doing for half of a year.

And, to be honest, there’s a lot of regular season games I’ve forgotten too.