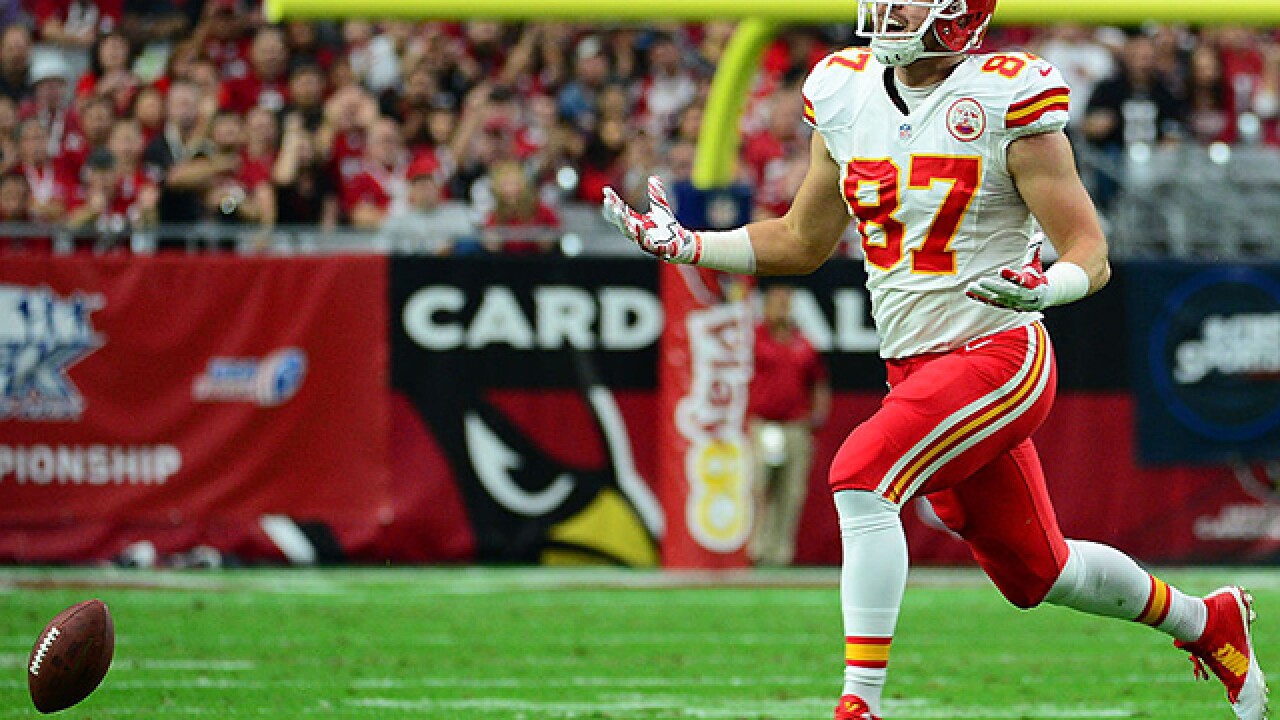 Copyright 2018 Scripps Media, Inc. All rights reserved. This material may not be published, broadcast, rewritten, or redistributed.
Jennifer Stewart
<p>GLENDALE, AZ - DECEMBER 07: Tight end Travis Kelce #87 of the Kansas City Chiefs misses a pass in the first half of the NFL game against the Arizona Cardinals at University of Phoenix Stadium on December 7, 2014 in Glendale, Arizona. (Photo by Jennifer Stewart/Getty Images)</p>

KANSAS CITY, Mo. -- Andy Reid has an opportunity to capture his sixth consecutive winning season in six attempts with the Kansas City Chiefs on Sunday. The only coach in franchise history with more is Marty Schotteheimer with eight.

Kansas City faces a unique challenge on Sunday. The Cardinals fired their former offensive coordinator Mike McCoy, who received his third termination is 22 months after stops in the AFC West with the Broncos and Chargers.

McCoy had arguably become predictable and his former team in Denver exploited his tendencies with a 45-10 victory to open week seven.

The Cardinals made a change after that game featuring five turnovers by their rookie quarterback Josh Rosen. Arizona promoted quarterback coach Byron Leftwich to offensive coordinator and currently have one game on tape for the Chiefs to get a feel for his style of play-calling.

LISTEN: The 4th and 1 Chiefs podcast crew breaks down Chiefs win against Cleveland

Rookie Head Coach Steve Wilks comes from the Carolina Panthers defensive scheme that focuses on a 4-3 style, 1 gap assignments in run, defeating individual matchups and remaining unpredictable in their rotation of zone coverages.

Here are the ways the Chiefs can patiently attack the Cardinals on Sunday.

Show the heat and twist
Josh Rosen’s urgency increases when he sees what appears to be pressure. He will get the ball out quicker and does not want to take a hit. The Cardinals offensive line is struggling and the twist is another opportunity to attack the line in their ability to pick up and pass off the rush.

The Chiefs don’t have to consistently apply pressure, but just the bluff of it is enough. Rosen is struggling to identify disguised blitzes or delayed blitzes from a pass protection standpoint, so that combination with certain zone coverages have lead to him holding onto the ball for some additional sacks. Rosen also throws a lower football and is easier to bat down than most when defenders get their hands up in his throwing lanes.

Fitzgerald and the screens
The change at offensive coordinator has been good for Larry Fitzgerald, who has seen more action recently. He is the primary target and what moves the chains in their offense, especially on hot routes. Leftwich is also running more wide receiver and running back screens.

Space them out
The Cardinals appear to be less effective on their pressure if the offense has stretched them out in their zone coverages. The Chiefs can isolate their zones with route combination and slowly add in their off-tackle run. It also stresses their safeties’ range deep with the combination of deep crossing routes and deep post blended together.

Use Play Action to set up the run
The Cardinals defense is determined to shut down the run game early. They leave themselves vulnerable at the second level with their aggressiveness in attacking gaps on run fakes. The run game likely won’t be fully effective until they have reached midway through the third quarter if they have spaced them out, misdirected them, forced the Cardinals to run around from sideline to sideline and forced them to think twice before crashing up into the gaps. The edges are there but they don’t loosen up for a bit based on previous games.

The Cardinals defense is a more disciplined football team compared to the Cleveland Browns. They are a more controlled football team in how they attack. It is just a matter of stretching them out to the brink on defense and attacking their offensive line.

Nick Jacobs can be found on Twitter: @Jacobs71 and can also be heard on the 4th and 1 podcast brought to you by 41 Action News. 4th and 1 is available on iTunes, Google Play  and TuneIn. You can check out all the 41 Action News podcasts here.