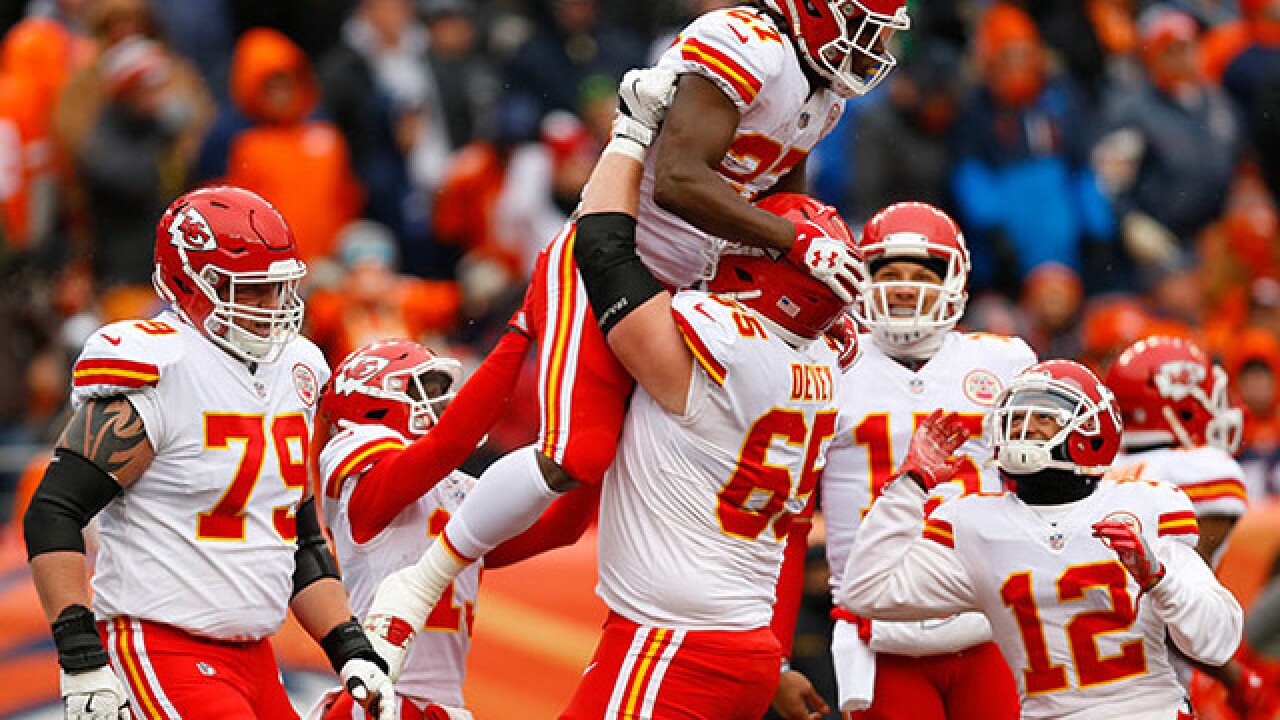 Copyright 2018 Scripps Media, Inc. All rights reserved. This material may not be published, broadcast, rewritten, or redistributed.
Justin Edmonds
<p>Two years ago, Parker Ehinger (79) — shown here celebrating a touchdown in a game last at Denver — appeared destined to become the Chiefs’ next great interior offensive lineman. Injuries derailed his ascendance, but Ehinger's healthy now and ready to make an impact.</p>

Ehinger , a fourth-round pick in 2016, was a surprise star in training camp as a rookie and earned the starting job at left guard.

It looked as if former general manager John Dorsey had unearthed a gem, who’d help form the backbone of the offense for an NFL generation.

Then, Ehinger immediately suffered a concussion and missed two games before returning to the starting lineup and showing tremendous potential after the Chiefs’ bye a few weeks later.

Next, of course, came the torn ACL during a game at Indianapolis, which not only wrecked the remainder of his first season, but also cost him training camp in 2017.

“Obviously, rookie year I had a good season going,” Ehinger said. “I started a few games there then at Indianapolis I blew out my knee completely. That’s tough and took about 14 months of rehab to come back from that type of injury.”

By the time Ehinger was healthy, and with Chiefs coach Andy Reid loathe to make changes up front, he only made saw the field once — in the regular season finale at Denver.

Ehinger said he didn’t feel 100 percent until midway through the season last year, “but they had kind of gotten into a groove with the guys who were playing, so it was tough to plug me in there at that point,” he said.

There is good news, though.

Ehinger feels refreshed and said this is the healthiest he’s been for training camp since his rookie year.

“Last year, obviously I didn’t get a chance to participate in training camp, because I was still coming back from my knee injury and everything,” Ehinger said. “It feels good to be back out there, mixing it up with the guys at training camp.”

At the moment, Ehinger is listed as the second-team left tackle behind Eric Fisher, but he’s also worked with the first-team offensive line at guard during training camp and in the preseason opener.

“I’m honestly just trying to play wherever they put me,” Ehinger said. “I’m trying to take that and run with it. If they need me to play right tackle, if they need me to play whatever guard — I’m open to any opportunity I get. I played tackle in college and I played guard in college and I’ve played guard in the NFL. I can kind of bounce around a little bit and adapt.”

The line clearly remains a work in progress based on the struggles evident during nine snaps in the preseason opener — a 17-10 loss against Houston Aug. 9 at Arrowhead Stadium — and depth appears to be an issue.

Having a player with Ehinger’s versatility, especially if he can regain the form that had him poised as a rising star in 2016, could be crucial to the Chiefs’ hopes in 2018.

“I felt good with everyone’s work out there,” Ehinger said. “A lot of guys got a lot of snaps, but, once we go back to training camp, we’ll go back to work.”

Ehinger said the offensive line group is the most tight-knit group in his three seasons in the league, so he’s confident the unit will iron out any kinks.

“It’s tough to come back and be the same player you once were,” Ehinger said. “But over time, you get the aches and pains out of your body and start feeling good. But it takes some time.”