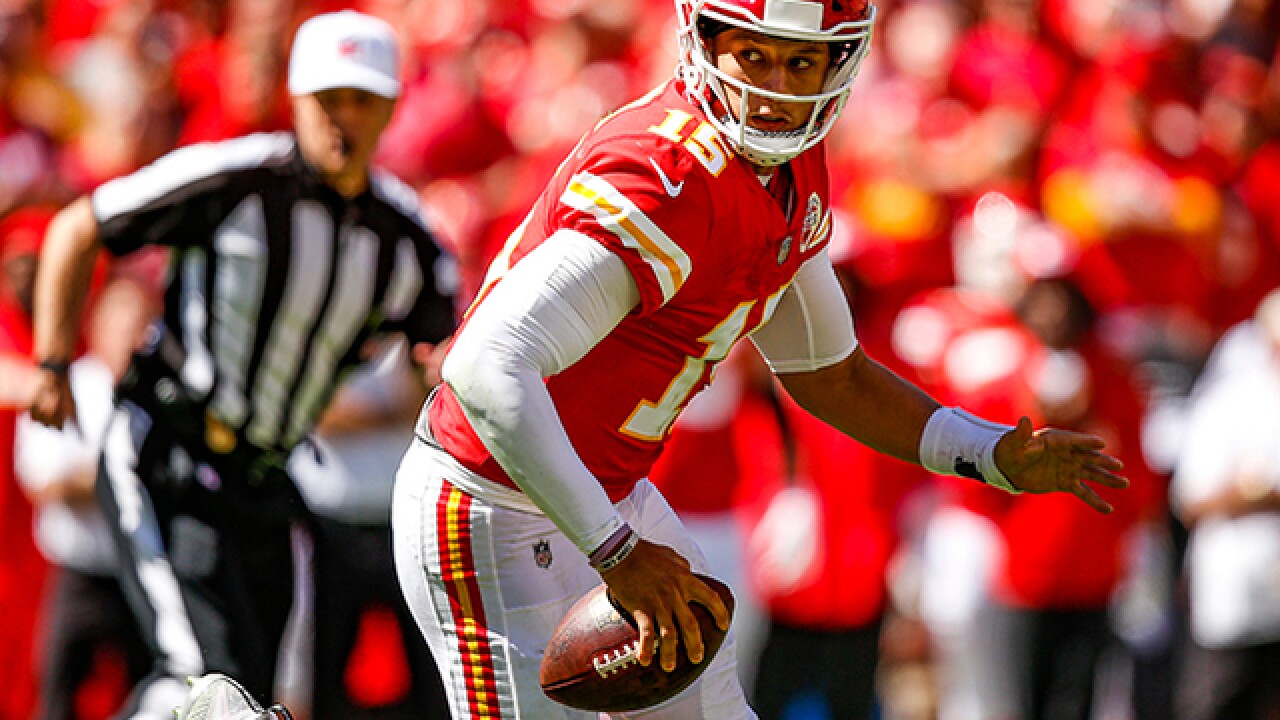 But it won't be the first time the Denver Broncos will be seeing Mahomes.

Chiefs coach Andy Reid has won the last five matchups against the Broncos, who were the opponent for Mahomes' first career start in Week 17 last season.

A sixth straight win, and second engineered by Mahomes, effectively would give the Chiefs (3-0) a three-game lead in the AFC West ahead the Broncos (2-1) and Chargers (1-2) based on potential tiebreakers.

It's also an opportunity for the Chiefs' offense to send a statement to the rest of the NFL about what it's capable of this season.

Undoubtedly, some fans and pundits are expecting the clock to strike midnight on Mahomes' dominating start to the season, including an NFL record 13 touchdown passes — and no interceptions — during the first three games of the season.

The Broncos have yet to score 28 points in any game this season but also have held each opponent to 27 or fewer points.

How can Kansas City ensure a sixth consecutive win over the AFC West rivals? Glad you asked:

The Broncos' defense prides itself on shutting down opponents' run offense. Its aim is to make teams one dimensional and force them into third-and-long situations.

With that aggressive style against the run, the Broncos crash their front seven hard at the line of scrimmage, which makes the defense susceptible to intermediate and deep routes for explosive plays of 20 yards or more.

Mahomes' ability to get the ball out quick off play-action could pose a massive problem for Denver.

Opponents have used "12 personnel" — one running back and two tight ends — a unique amount this season to give the illusion of a run while isolating the Broncos' linebackers and safeties against tight ends.

Hitting the deep ball off play-action will require moving the pocket with a bootleg off the stretch fake or max-protecting to give Mahomes roughly 3 to 4 seconds for the opportunity to push the ball deep to his speedy receivers.

2. Misdirect-and-pull or space them out

Opponents can run against the Broncos' defense, but it involves the sleight of hand with misdirection and moving personnel — pulling tight ends, fullbacks and guards around the edge or on trap blocks to get 5-plus-yard gashes in the run game.

The Broncos also can be run against by spacing out their front seven with three-by-one or two-by-two receiver sets. Such formations typically make the box even, with one blocker for each defender, and that can open the run with combination blocks to the second level.

If the offense needs to gain 6 yards or more, the Broncos gamble that opponents are likely to pass and utilize twists and loops with their quickest pass-rushers to attack the perceived weaknesses of the offensive line.

Miller sometimes will lay back in spy mode until the quarterback steps up in the pocket before crashing down the line of scrimmage and unloading a massive hit for a sack.

Additionally, the Broncos bring overload and delayed blitzes to one side on second and third downs with a safety or corner and two speed rushers, hoping to force the ball out quickly on intermediate and deep route combinations.

Lastly, the San Francisco 49ers revealed the Chiefs' vulnerability in the "A" gaps, which are on either side of the center.

Kansas City's inability to prevent pressure up the middle last Sunday at Arrowhead Stadium meant Mahomes was forced to throw before he completely was ready sometimes but also kept him from escaping the pocket.

4. Know where Phillip Lindsay is at all times

Undrafted rookie running back Phillip Lindsay has the speed to go the distance on any play.

The Broncos like to utilize him in the stretch-run game, where he thrives in picking a hole and bursting through quickly. But he also is a headache in the flats.

Lindsay is a huge mismatch against slower safeties and linebackers and quickly can cover 30 yards.

He is their home run hitter while third-round pick Royce Freeman is most effective in as a power back in the late third to fourth quarter, when a defense is worn down from chasing Lindsay and the Broncos receivers and winded from the altitude.

A significant amount of Denver quarterback Case Keenum's interceptions have come off a defender watching his eyes and jumping the intermediate or vertical routes.

Seattle Seahawks safety Earl Thomas, who is the subject of trade speculation involving the Chiefs, played single high and baited Keenum into throwing the vertical route.

A couple of corners have watched Keenum's eyes and drifted into the coverage on the dig or out routes.

If Kansas City defensive coordinator Bob Sutton and his staff can recognize route-combination preferences, there is a chance for the Chiefs to come up with at least their second interception of the season.

Keenum is not easily rattled by pressure or blitzes. He will stand tall in the pocket and deliver the throw, but he seems to miss the robber waiting for him.

6. A heavy dose of crossing, dig and corner routes

The Chiefs' pass defense struggled with the 49ers' crossing routes in some zone coverages. The tight end and fullback got lost in shuffle.

The Broncos have a strong wide-receiving trio that features Emmanuel Sanders, Demaryius Thomas and Courtland Sutton. All are capable of running the route tree effectively and clearing out space for each other.

Kansas City's secondary will need to be assignment sound with their responsibilities and communicate better if they don't want to give up their third 400-yard passing performance in four games.

Strong coverage is the best way to sack Keenum.

Nick Jacobs can be found on Twitter: @Jacobs71 and can also be heard on the 4th and 1 podcast brought to you exclusively by 41 Action News. 4th and 1 is available on iTunes , Google Play and TuneIn .