Keys to the Game: San Francisco comes to Arrowhead 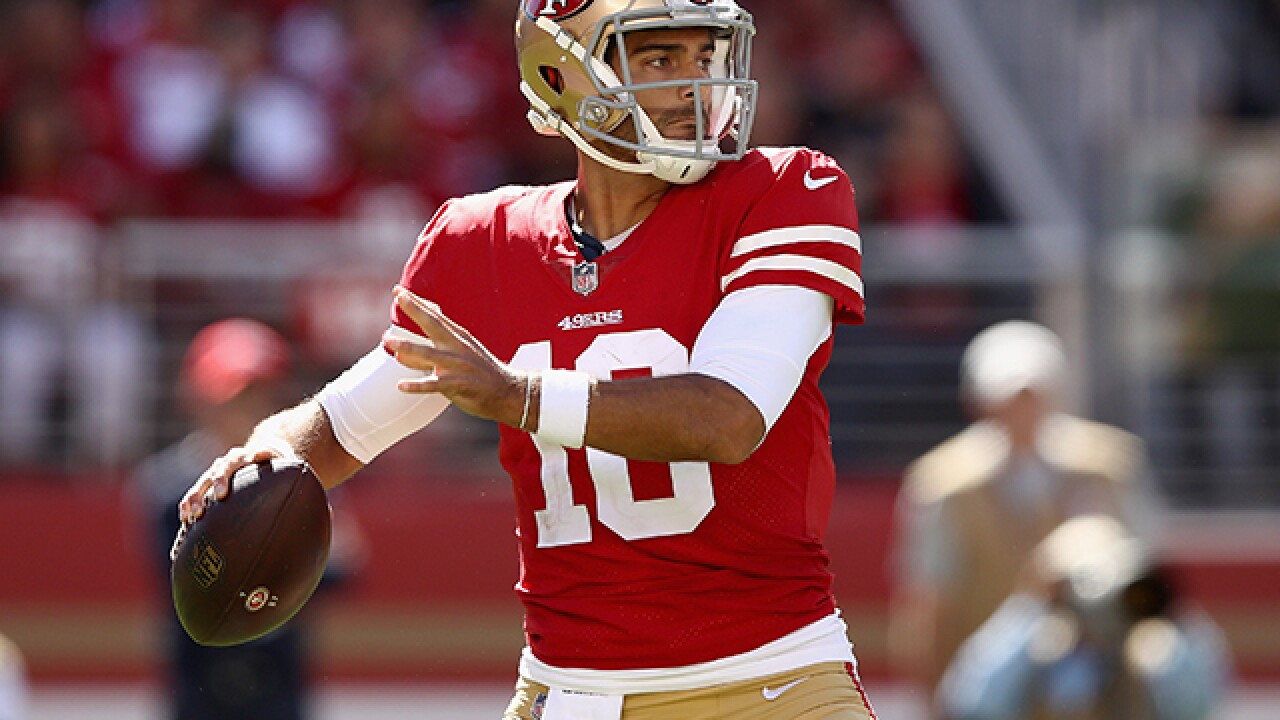 Copyright 2018 Scripps Media, Inc. All rights reserved. This material may not be published, broadcast, rewritten, or redistributed.
Ezra Shaw
<p>SANTA CLARA, CA - SEPTEMBER 16: Jimmy Garoppolo #10 of the San Francisco 49ers in action against the Detroit Lions at Levi's Stadium on September 16, 2018 in Santa Clara, California. (Photo by Ezra Shaw/Getty Images)</p>

KANSAS CITY, Mo. -- The Patrick Mahomes era has arrived in Kansas City with rave reviews after two games that feature big implications down the playoff stretch.

The Chiefs offense hasn't even hit its stride yet and has already accounted for 80 points on the road. Mahomes will look to become the fourth quarterback in NFL history to throw four touchdown passes in three consecutive games. The 49ers defensive scheme may allow him to do just that.

On offense, Head coach Kyle Shanahan uses a blend of his father Mike Shanahan's stretch run and bootleg concept from his father's Denver Broncos stint and Kyle uses portions of his scheme from the Atlanta Falcons Super Bowl run. The 49ers lack the explosion at receiver that the Falcons had during that time, so most of the offense runs through their play-action passes, stretch runs, bootlegs and spacing teams out with shotgun to give quarterback Jimmy Garoppolo time to isolate the linebackers and safeties.

Below are some ways for the Chiefs to come out with their first home victory of the season.

1. Attack Garoppolo with overloads, delayed blitzes and fanning out with the club
Jimmy Garoppolo is a solid quarterback that gets into rhythm with play-action passes and the bootleg. He has a solid timer in his head of when to get rid of the football if those plays are working. When defenses begin to bring overload blitzes to a side, Garoppolo speeds up his release and will rush the football. Once Garoppolo takes his first hit it gets into his head. He will hold onto the ball longer and his eyes will drop after the first hit or sack. The weakness in his protection is the interior three. They do a poor job of keeping patience in their pass sets.

Delayed blitzes are the second wave of attacking the 49ers quarterback. Now that he is holding onto the ball there is time to run a delayed blitz. Garoppolo typically has the ball out on average 2.68 seconds. Once the hit occurs that number jumps up to around 3 seconds if not longer depending on the route combinations. He will also short arm throws if he sees a blitzer coming at him. The ball has more wobble to it and loft to it which can lead to interceptions.

The last wave is the rush fanning out. The center will chose a side to help on the rush if a defender isn't his to account for. That is when the defensive tackles have an opportunity to use the club and swim technique to get on the inside shoulder of the guards and rush Garoppolo's throw if not hit him.

2. Where is George Kittle?
The former fifth round pick has become one of the favorite targets for Garoppolo for the first two games this season. He is the safety blanket down the seam, off the boot and on play-action passes. Kittle is a great blocking tight end but must be accounted for in the passing game because it is another way to disrupt Garoppolo and make him uncomfortable. The 49ers will likely look to match him up against Eric Murray or a linebacker and take advantage of it. Fullback Kyle Juszczyk is also a player to keep an eye on against the linebackers and safeties. He is a bigger threat in the passing offense than he is likely given credit for by defenses.

3. Respect the stretch
The 49ers run game is primarily based off the stretch run play. Matt Breida is the more effective runner in the scheme and can take it the distance is run discipline is not maintained. Alfred Morris can run the stretch but doesn't have the same speed and typically runs more of their iso and blast plays. The threat of the run game though is crucial to make their bootleg and play-action have that second level void in coverage.

4. Use motion and misdirection to overload them with false keys
The Chiefs have a unique way of attacking the scheme the 49ers run with this concept. If you remember the dominate drives by the Chiefs that lead to a 24-20 victory of the Seahawks in 2014 this was a big reason why. Andy Reid and company utilized jet sweeps, shifts and motions to widen out the area they wanted to attack. The safeties and linebackers made adjusted based on those keys. It created voids in both the run and pass that the Seahawks couldn't adjust to.

5. Well timed route combinations
The 49ers run a great deal of zone coverage. Overloading areas with combination routes to create voids in coverage is the easiest way to attack their scheme. The 49ers don't have the athletes the Seahawks did to cover all the necessary ground in these concepts. There are massive voids that can be taken advantage of at the second and third levels of the defense. If the Chiefs can get the 49ers in single high coverage with Tyreek Hill against Richard Sherman, coming off an Achilles injury late in the season,  it could be a very fruitful play. There is also an opportunity for massive chucks of yardage by running the safety off and performing double moves timed with it.

6. Utilize the delay, counters, traps and space the defense out
The Chiefs could find a great deal of success in the run game just by letting the 49ers defensive line rush upfield. The 49ers attempt to run loops and twist with DeForest Buckner but they also align three defenders on their defensive line on the same side in a one, five and wide-nine technique. They use the one technique to cross the face of the center and attack the opposite gap. Down blocking and high hat reads could give Kareem Hunt and Spencer Ware ideal space to run.

The 49ers do not present the same challenges the Chargers and Steelers did for the Chiefs on defense or in their passing attacks but they shouldn't be taken lightly. The Lions had a crucial late game interception get called back and kept them out of position from beating the 49ers at home. The Vikings missed some throws or would have widened their margin of victory over the 49ers. Either way the Mahomes era makes its regular season debut at Arrowhead Stadium with the Chiefs in great position standings wise.

Nick Jacobs can be found on Twitter: @Jacobs71 and can also be heard on the 4th and 1 podcast brought to you exclusively by 41 Action News. 4th and 1 is available on iTunes, Google Play  and TuneIn.