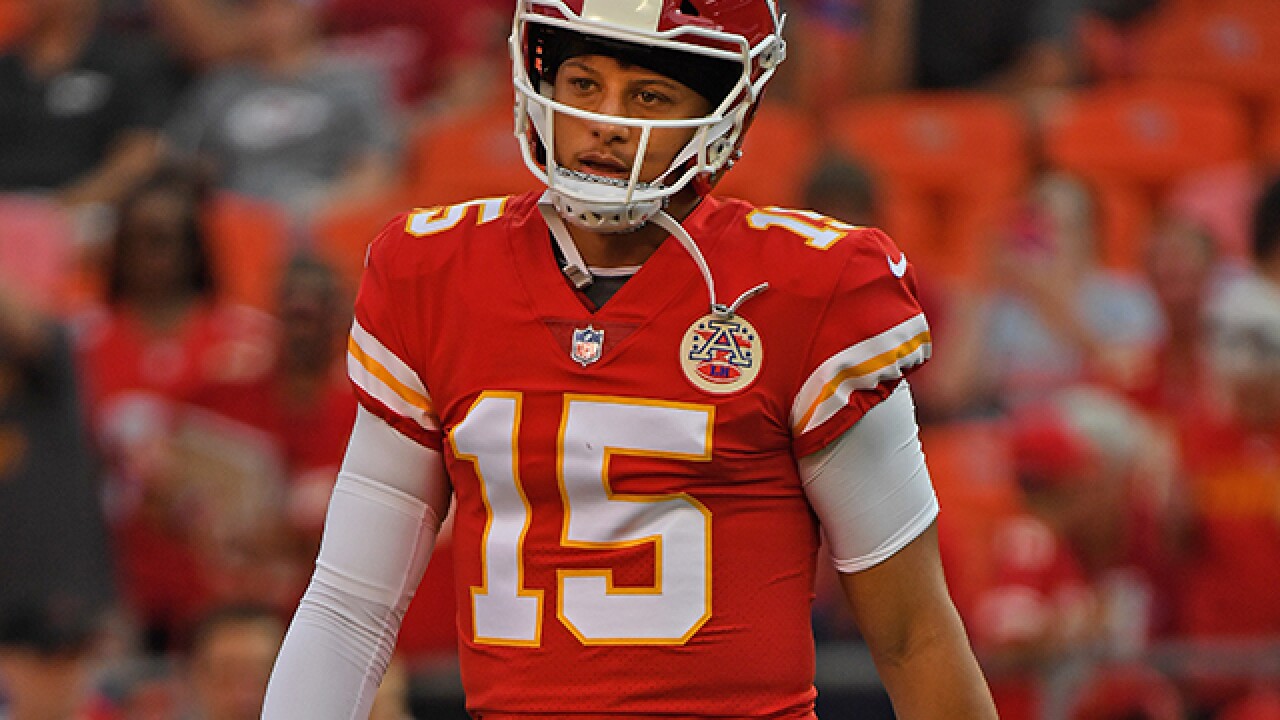 Copyright 2018 Scripps Media, Inc. All rights reserved. This material may not be published, broadcast, rewritten, or redistributed.
Peter Aiken
<p>KANSAS CITY, MO - AUGUST 09: Quarterback Patrick Mahomes #15 of the Kansas City Chiefs walks out onto the field during pre-game warmups, prior to a pre-season game against the Houston Texans on August 9, 2018 at Arrowhead Stadium in Kansas City, Missouri. (Photo by Peter Aiken/Getty Images)</p>

The new football smell has worn off on the 2018 preseason with the first preseason game in the books. A couple of focal points showed up during the Texans game that are worthy of being monitored throughout the preseason. The Chiefs season will depend on the growth of these areas.

1. Patrick Mahomes' growth
Mahomes’ early development has always been based on patience from the coaching staff, his work ethic and the play of the offensive line. Andy Reid knows how to teach a quarterback and build an offense around him while hiding the weaknesses on his roster for 8-9 games. Reid is one of the best in the game at that. He knows how to out-scheme his opponents and move a defender somewhere so the finesse offensive linemen can get in their way. It’s an exhilarating chess match for Reid.

Mahomes right now is having to learn about pocket awareness in the NFL. Where the void is so he can buy more time, and where it will typically be cleaner on a given rush? He did well for the most part in week 17 last year because the line had played an entire season. They haven’t had that luxury this year.
He is also having to get consistent reps in practice, developing the timer in his head of when he should get rid of the ball. Some of the drills in training camp do a disservice of making him feel like he has more time than he will in an actual game. The coaching staff may potentially need to start repetitively drilling that in his head.

Mahomes is also having to find consistency in his reps. He hasn’t experienced enough reps yet to have a comfort level with all his targets on their timing for placing the football in stride on every route. He is still gauging his target points on each level of throw and when to put touch on a football versus when to rifle it in the window. Most of these are going to come with time and creating the muscle memory through reps, but Mahomes will need his offensive line to keep him clean and upright for that progress to happen.

The former 10th overall pick is also becoming the guy everyone looks to for the spark on the field and in the huddle. He will need to deliver with his play but also not be afraid to hold his teammates accountable for raising their play in a constructive way. The offense needs a leader of men and light the necessary fire to a championship level.

2. Offensive line answering the bell
The number one responsibility of an offensive lineman is to never let your quarterback be touched. The second responsibility is to set the tempo and impose your will on the opponent. The Chiefs offensive line throughout the years has struggled with not shooting their hands up quick enough with strong punches to stun the defenders. As well as to get within the framework of their opponents' shoulder pads and to keep driving their feet after initial impact. The run game struggled at all three levels during the first game because of this, especially at the goal line at the end of the game.

The name plates change but those bad habits seem to remain each season. The Chiefs have done a better job of bringing blitzes and working on twists, stunts and games in practice. Both sides of the ball desperately need those reps. There are just bad habits that seem to linger with an offensive line that has four of five returning together for a third straight season. Jeff Allen, Parker Ehinger and Zach Fulton were three of the tempo setters during their starting tenures. They had mean streaks that rubbed off on the rest of the offensive line. They need to find that person this season. If not, Mahomes’ growth and the offense might be stuck in neutral during various points of the season.

3. Edge rushing potential
Breeland Speaks put on a strong showing for his first preseason game. He showcased a powerful bull rush, he set up the tackle on multiple occasions and utilized a smack, dip and rip combination to get around the edge. The second round pick was strong in setting the edge against the run and provides a physical force that can match Justin Houston in the run game. Speaks’ growth over the next three weeks could push him to the starting defense when the Chiefs head to Los Angeles.

Tanoh Kpassagnon, the 2nd-round pick from the previous season, improved in his ability to rush the passer. He seems to have gotten strong but also fully understands how to use his arm length to keep offensive lineman from being able to get into his framework. Kpassagnon appears to be more comfortable from the outside linebacker position, but looks more natural rushing from the right side. The development of these two rushers will be crucial for a playoff push and steady rush. Rob McCray and Tyrone Holmes would be an added bonus if either can push their way onto the roster.

4. Depth needed at tight end and safety
The Chiefs could use help along the offensive line but the tight end position and safety depth look lackluster after a couple weeks of camp. Travis Kelce is the ultimate safety valve for Mahomes. When things begin to break down in the pocket, Mahomes is looking for Kelce or the back in the flats.

If Kelce were to sustain an injury, the offense would have a tremendous drop off at the tight end position in both run-blocking and dynamic pass catching. Harris continues to struggle with blocking at the line and on the perimeter. Jace Amaro and Alex Ellis have not separated themselves as the third tight end at this time. The Chiefs need to find a blocking tight end to give them the edge on run downs and screens.

The injuries of Eric Berry and Daniel Sorensen have quickly left the safety position in uncharted territory. Eric Murray struggled to cover tight ends last season and Leon McQuay is still an unknown at this time. Armani Watts has the range to succeed at the position but it will come with growing pains. Robert Golden struggled in coverage against the Texans’ rookie tight end. The Chiefs might be in the market to enhance both positions after their trip to Atlanta.

5. Pushing for roster spots
Andrew Wylie had a strong showing in his first preseason game. The coaching staff rewarded his performance with a crack at the first team right guard position when starter Laurent Duvernay-Tardif sustained a concussion during practice this weekend. Wylie has a chance to showcase his versatility at left tackle and right guard in Atlanta.

Ben Niemann had arguably the strongest performance of the first preseason game. The former Iowa Hawkeye didn't hesitate in his reads and attacked the line of scrimmage similar to another player who previous wore the no. 56 jersey. Niemann is likely pushing for the fifth inside linebacker spot as reliable depth and as a special teams performer.

Chase Litton looked poised against the Texans. He was calm in the pocket and threw an accurate football with good velocity on it. The rookie quarterback led a strong drive in a pressure situation and delivered in clutch situations until the windows were condensed in the goal line situation. Litton is pushing for the number three spot and will have a strong chance of grasping it with performances like that.

Darrel Williams is caught in a numbers game right now. His determination and fearlessness from his running style will earn him another opportunity in the NFL. The roster at his position is stacked with more veteran-ready experience. He should be able to develop finer techniques required at an NFL level. The Chiefs would benefit from him being on the practice squad but strong performances like the Texans game will get him a shot somewhere in the league.