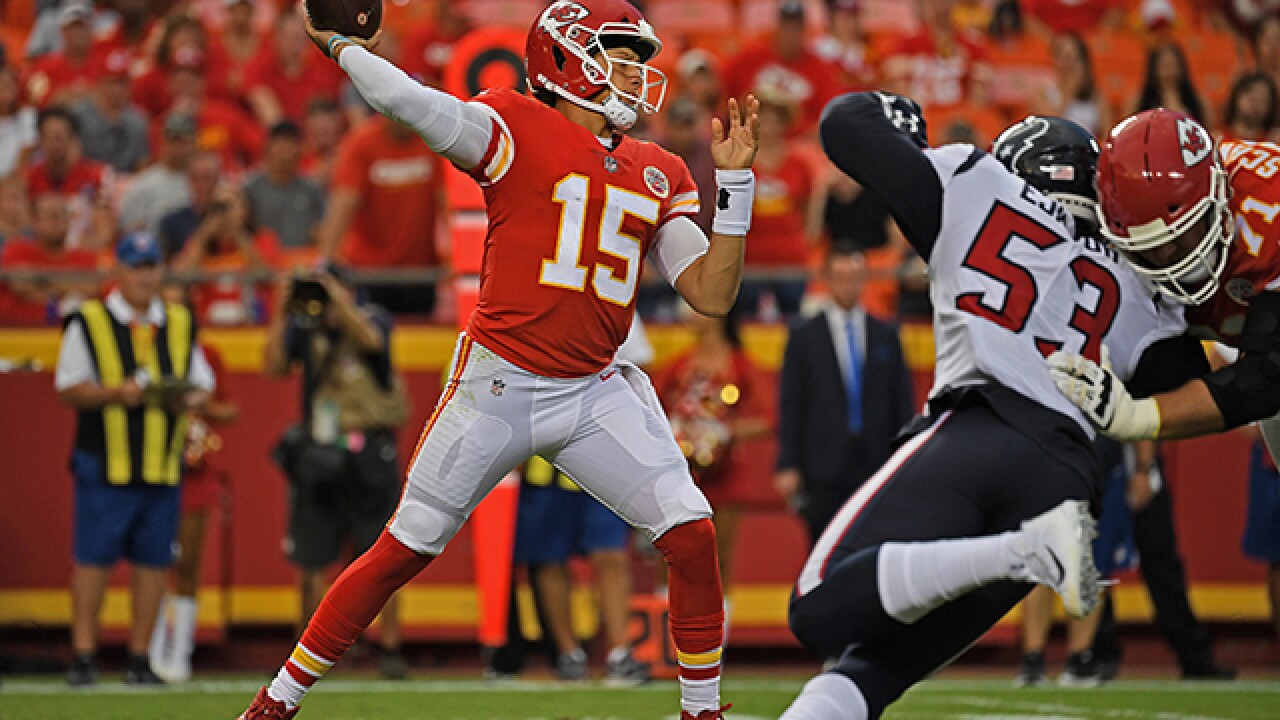 Copyright 2018 Scripps Media, Inc. All rights reserved. This material may not be published, broadcast, rewritten, or redistributed.
Peter Aiken
<p>Kansas City Chiefs quarterback Patrick Mahomes (15) threw a pass down field during the first half against the Houston Texans on August 9, 2018, in a preseason game at Arrowhead Stadium in Kansas City, Missouri.</p>

Mahomes' first appearance as the Chiefs' starting quarterback lasted nine plays and netted 29 yards Thursday during a 17-10 loss to the Houston Texans in the preseason opener for both teams.

Now, the challenge for Mahomes, who finished 5 of 7 for 33 yards on his two drives, is to use the game to get ready for the regular-season opener Sept. 9 at the Los Angeles Chargers.

"We've got to just keep perfecting our craft, keep perfecting the plays and hopefully move the ball and score a few more touchdowns," he said, calling the preseason "a little bit of a tease."

Mahomes, who took over the starting job when Alex Smith was traded to Washington during the offseason, was sacked once and didn't throw a touchdown or interception in a solid, if unspectacular, performance.

"Just scoring a touchdown or a field goal would probably have made it a lot better," Mahomes said. "We moved the ball a little bit; we made some plays. But at the same time, you want to kind of get the drive going a little bit more."

Eventually, Chiefs fans will get to see Mahomes' full ability on display. He didn't complete a pass longer than 14 yards and never targeted Sammy Watkins — who signed a three-year, $48 million deal in the offseason — on Thursday.

"Being the quarterback that I am, I like to take shots downfield," Mahomes said. "I just didn't get the opportunity to do it tonight."

The announced crowd of 58,465 also witnessed the return of Houston's second-year franchise quarterback in Deshaun Watson, who was selected two picks after Mahomes at No. 12 overall in the 2017 draft.

Watson won the Texans' starting job last season, but missed the second half of the season with a torn ACL. He played only one series and threw only one pass — a 4-yard completion to wide receiver Bruce Ellington — while handing off four times to running back Lamar Miller.

"I thought it was important for him to go through the whole warmup process and preparation for the game and get out there and operate the offense," Texans coach Bill O'Brien said.

That was good enough for Watson, who relished the return.

"It was a good time to get the juices flowing a little bit, to hear the fans and just walk on the field," Watson said.

Brandon Weeden took over for Houston after the game's opening drive and led back-to-back touchdown drives — including a 12-play, 68-yard drive during his first series that was capped by a 6-yard touchdown pass to rookie tight end Jordan Akins.

Weeden hooked up with Akins for a 14-yard touchdown on the next drive and finished 9 of 11 for 97 yards with two touchdowns after starting out with two incompletions.

Mahomes' backup, Chad Henne, was responsible for the lone Chiefs touchdown — a 24-yard pass over the top to Demarcus Robinson late in the second quarter.

"I want to come out and show the coaches I can make plays, so it was pretty good," Robinson said. "We had a double move called, so I gave him a little hesitation about 5 yards off the line and it was a great ball."

Robinson finished with three catches for a game-high 48 yards, while Henne finished 8 of 14 for 91 yards with a touchdown and an interception.

Several notable players were absent for both teams.

"When they came and told me (I was starting), I was just ready," said Watts, a rookie fourth-round pick from Texas A&M. "That's what you've got to be as the next man up."

Kansas City also was without both starting inside linebackers — Anthony Hitchens, a free-agent acquisition from the Cowboys, and Reggie Ragland.

Houston had its share of absences as well — including linebacker Whitney Mercilus (soft tissue injury), who didn't make the trip.

There were no protests from players on either team — though a few Chiefs, in particular, stood well off the sideline near the benches — during the national anthem. It didn't appear that any players went to the locker room for the anthem.

Texans LB Kennan Gilchrist did not return after absorbing a helmet-to-helmet blow late in the fourth quarter.