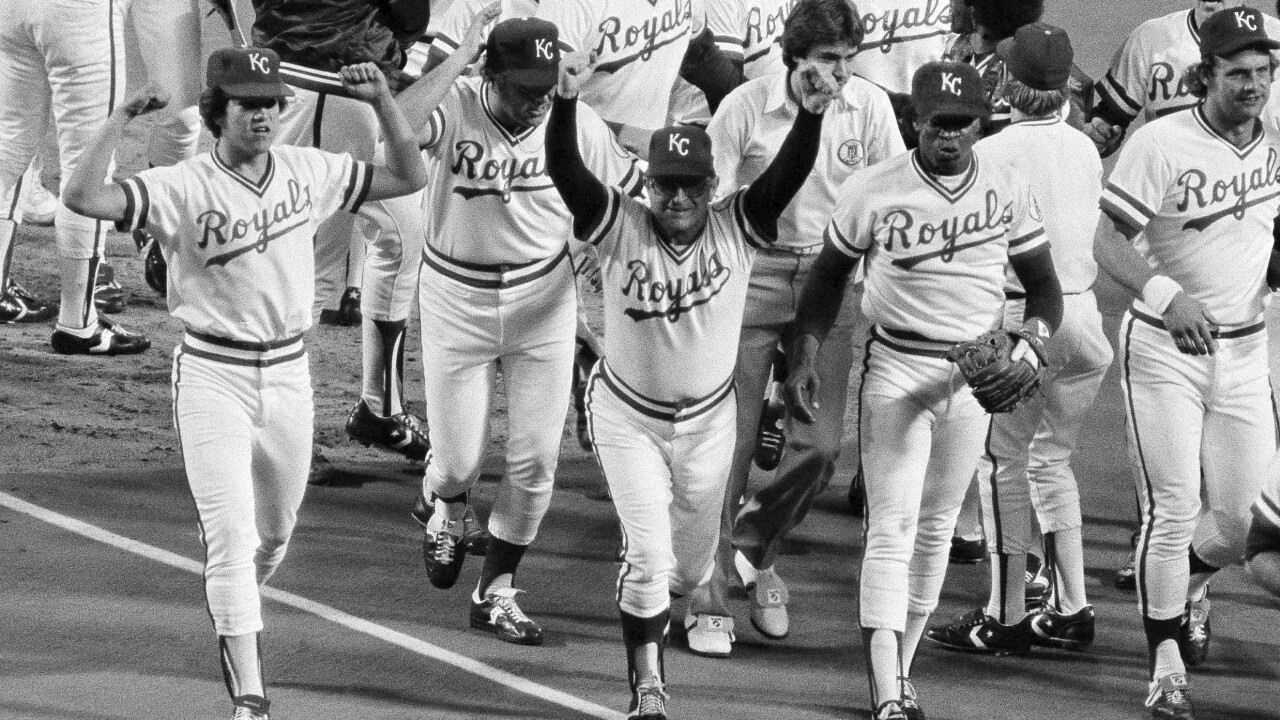 (Copyright 2020 The Associated Press. All rights reserved. This material may not be published, broadcast, rewritten or redistributed.)
AP Photo
In this Oct. 9, 1980, file photo, Kansas City Royals manager Jim Frey, center, leads some of his charges off the field at Royals Stadium after the home team defeated the Yankees 3-2 in Game 2 of the American League Playoff Series in Kansas City. Frey, who managed the Kansas City Royals to the 1980 AL pennant and the Chicago Cubs to within one win of the 1984 World Series, has died. He was 88. Frey died Sunday, April 12, 2020, at his home in Ponte Vedra Beach, Florida, according to the Atlantic League’s Somerset Patriots, the minor league team he had been affiliated with since its launch in 1998.

Frey, 88, led the Royals to the franchise’s first American League pennant and World Series appearance in 1980.

“The Kansas City Royals are saddened to hear of the passing of former manager Jim Frey at the age of 88,” the club said in a statement Tuesday.

Kansas City broke through against the Yankees in the American League Championship Series, but lost to the Philadelphia Phillies in six games in the World Series that year.

Our condolences to family and friends of former #Royals manager, Jim Frey, who passed away on Sunday. In 1980, he led the club to a 96-65 record and a World Series appearance. #AlwaysRoyal pic.twitter.com/swbD5ZBy0F

He also managed the Royals during the strike-shortened 1981 season, but was fired late in the season.

Frey posted a 127-105 record during his Royals’ tenure before spending three seasons as manager of the Chicago Cubs from 1984-86, leading the moribund franchise to the National League East title in 1984.

It marked the franchise’s first postseason appearance since 1945 and earned Frey the National League Manager of the Year honor. He eventually moved into the Cubs’ front office.

Most recently, Frey served as Vice Chairman of the Somerset Patriots, a minor-league team based in New Jersey.

“Jim will be greatly missed and we send our love to the entire Frey family,” Somerset Patriots Chairman Emeritus Steve Kalafer said in a statement. “Jim had countless contributions to the Somerset Patriots as one of our first supporters over two decades ago. We wouldn’t be who we are as an organization without his guidance early on. Not only was he a friend to our team, he was more importantly, a friend to me, Suzanne, and Jonathan and Josh. We will do whatever we can to honor him at the ballpark this season and beyond.”

Frey is survived by his wife of 68 years, Joan, and four children — a son, James, and three daughters, Cindy, Mary and Jennifer.