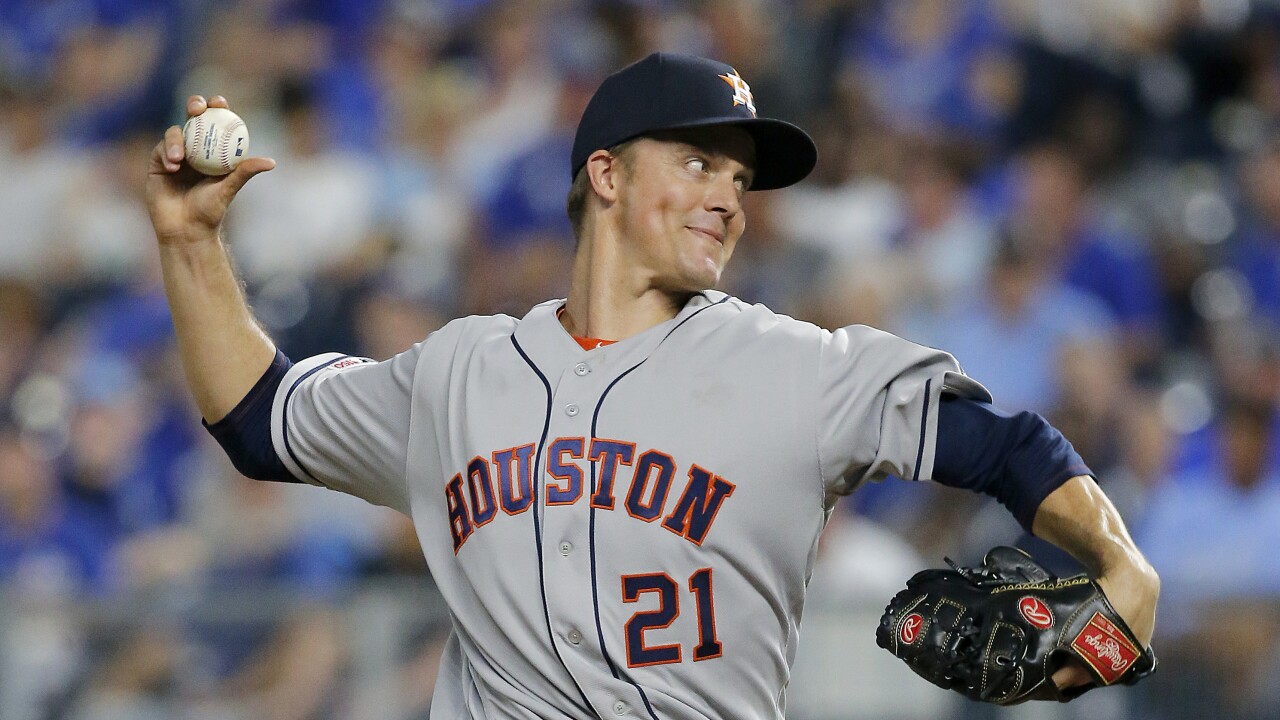 Alex Bregman hit his 36th homer and rookie Kyle Tucker was 4-for-4 for the AL West-leading Astros.

Greinke (16-5) went six innings and handed a 2-1 lead to the bullpen. Hector Rondon, Joe Smith, Bryan Abreu and Will Harris combined for three scoreless innings. Greinke gave up one run, six hits and no walks. He struck out seven.

This was the fifth start by Greinke against the Royals since they traded him after the 2010 season. Oddly, all five were at Kauffman Stadium and each was for a different team -- the Brewers, Angels, Dodgers, Diamondbacks and Astros. He was 0-2 in the first four starts.

Chirinos singled in the Astros' sixth run in the ninth.

Tim Hill bailed out Royals starter Mike Montgomery (3-9) in the sixth inning after the Astros went ahead 2-1 on a walk and singles by Yuli Gurriel and Tucker. An error by second baseman Nicky Lopez loaded the bases with no outs. Hill got a strikeout, a popup and a flyout to strand all three runners.

Lopez ended a 0-for-22 skid with an infield single to start the third inning. Whit Merrifield followed with a drive that bounced off the left-field bullpen fence. Lopez, running from first, made a headlong dive for the plate past catcher Chirinos' foot but was called out by plate umpire Chris Guccione. The Royals issued a replay challenge, and Lopez was ruled safe -- not only did he touch the plate before the tag, but Chirinos illegally blocked home before catching the ball.

Bregman tied it by leading off the fourth inning with a blast to left field.

One night after left fielder Alex Gordon and manager Ned Yost were ejected by plate umpire Lance Barrett for remarks about his ball-and-strike calls, Royals bench coach Dale Sveum was ejected by Guccione while the Astros were batting in the second inning.

Catcher Salvador Perez, out for the season, is on track to return to the Royals' lineup in 2020. Before batting practice Saturday, he blocked pitches aimed into the dirt from a machine, fired hard throws into coach Pedro Grifol's glove and even took ground balls at first base. He's also been catching bullpen sessions and has been hitting balls off a tee and from short tosses.

Perez, who underwent preseason Tommy John surgery on his right arm, will not play any winter ball.

Shortstop Carlos Correa, out since Aug. 20 with a back ailment, had his latest injury rehab with Triple-A Round Rock ended after one game. That's because the Express were eliminated in the playoffs Friday night by the Sacramento River Cats.

"He's going to stay in Round Rock for a couple days," Astros manager A.J. Hinch said. "He worked out today at the field and we have some staff there, we did keep a player back to throw batting practice to him tomorrow. We'll bring him to Houston and evaluate him and, if all goes well, we'll continue his rehab in the big leagues."

The series concludes Sunday when RHP Jakob Junis (9-13, 5.06 ERA) faces the Astros, who pounded him for three homers and five runs in a May 6 loss at Houston. LHP Wade Miley (13-5, 3.74) has a 4-2 career record in six previous starts against the Royals but has not faced them since 2016, when he was with Seattle.