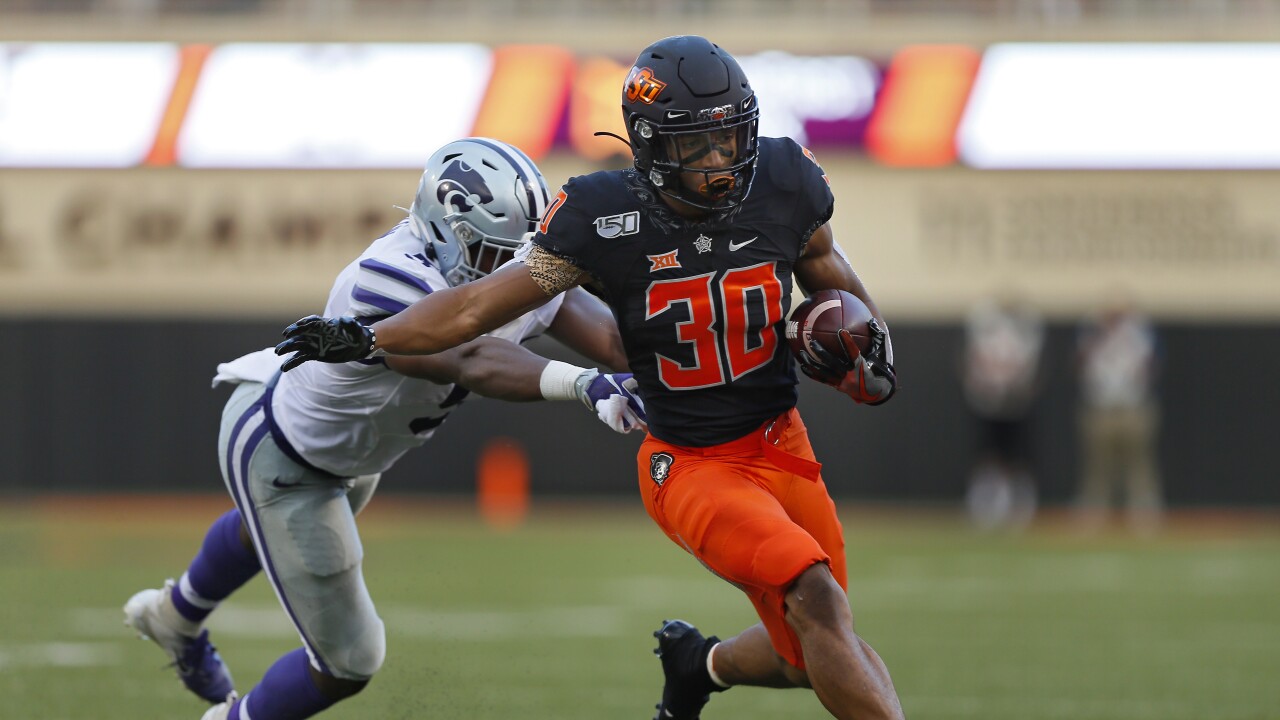 STILLWATER, Okla. (AP) -- Chuba Hubbard ran for 296 yards and a touchdown on just 25 carries, and Oklahoma State shut down No. 24 Kansas State's own vaunted rushing attack in a weather-delayed 26-13 victory Saturday night.

Hubbard hardly carried at all in the first quarter for the Cowboys (4-1, 1-1 Big 12), who built a 13-0 lead when the game was halted more than an hour in the second quarter due to lightning. But the breakout star finished with runs of 53, 84 and 44 yards in his dominant performance.

Spencer Sanders added 153 yards passing and a touchdown for Oklahoma State. Most of that went to Tylan Wallace, who hauled in eight passes for 145 yards.

Skylar Thompson was 11 of 23 for 118 yards for the Wildcats (3-1, 0-1), who were coming off a bye following their big win at Mississippi State. But any momentum they gained from their foray into SEC country was wiped out by their return to the Big 12.

By the time lightning hit and the officials ordered everyone off the field, the Cowboys had a 208-32 edge in offensive yardage. And when the game resumed, Kansas State kicked a field goal only for Oklahoma State to answer with a touchdown drive to take a 16-3 lead into halftime.

Hubbard added his 84-yard touchdown run in the third quarter before the Wildcats tacked on a field goal by Blake Lynch and a short touchdown run by James Gilbert to make it a game.

Oklahoma State added a field goal in the closing seconds when the outcome was already decided.

Kansas State entered the game 10th in the nation in rushing, averaging 280 yards, but struggled for most of this one. Through the first half, new coach Chris Klieman's team gained just 18 yards on 13 carries, and had just 68 heading into the final couple minutes of the third quarter. In the end, the Wildcats wound up with 126 yards on 32 carries.

Oklahoma State had issues capitalizing in the red zone in its previous game, a 36-30 loss at No. 11 Texas. And once again, the Cowboys could not punch the ball in from inside the 20. It was a pair of turnovers and a turnover-on-downs against the Longhorns, while it was three field goals against Kansas State. The only difference Saturday night was the outcome.

Kansas State returns home to take on Baylor next Saturday.