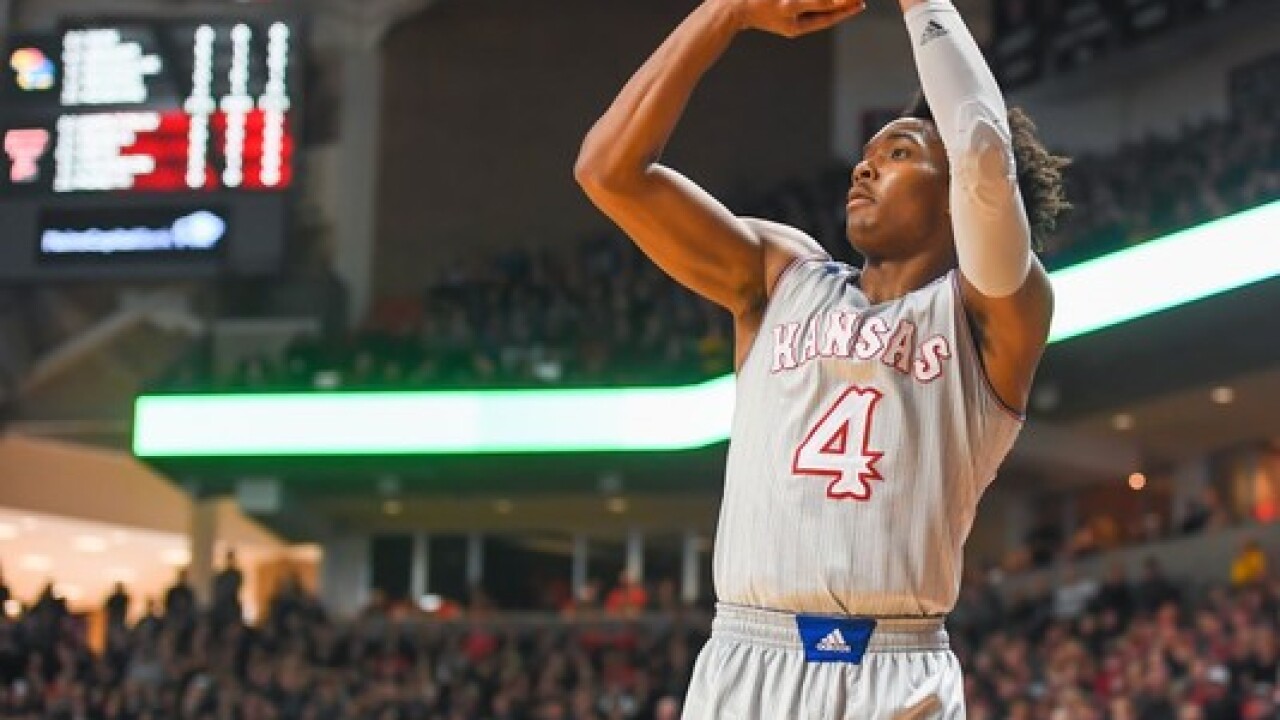 LUBBOCK, Texas -- Devonte Graham scored 26 points and No. 8 Kansas set an NCAA record with its 14th straight regular-season conference championship, clinching at least a tie for the Big 12 title with a 74-72 victory against sixth-ranked Texas Tech on Saturday.

Graham hit a tiebreaking jumper with 1:30 remaining to help Kansas (23-6, 12-4) to its fourth straight win and a two-game lead over the Red Raiders, who have lost three in a row for the first time this season. The Jayhawks never trailed.

All 14 of the titles have come under coach Bill Self, who finished second in his first season at KU. Four of the previous 13 championships were shared. UCLA won 13 straight Pac-10 titles from 1967-79.

The current skid for the Red Raiders (22-7, 10-6) started when leading scorer Keenan Evans injured a toe in the first half of a loss to Baylor that pulled Kansas even in the Big 12 race. The senior guard scored six points in his third straight game in single digits since the injury.

Zhaire Smith scored 20 points and fellow freshman Jarrett Culver had 18 for Texas Tech, which dropped its second straight game since reaching the highest ranking in school history. The Red Raiders surpassed last week's No. 7 ranking that matched the 1995-96 team.

Smith had a putback dunk to pull Texas Tech even at 68-68, but Graham hit the go-ahead jumper and got an off-balance shot to fall while the Red Raiders committed turnovers on consecutive possessions.

Svi Mykhailiuk scored 15 of his 21 points in the first half for the Jayhawks, who scored the first eight points of the game.

Kansas: Mykhailiuk and Graham, both seniors, formed a pretty good first half-second half tag team. The Ukrainian guard had a team-leading 15 points and three assists before halftime, and Graham had 18 points in the second half.

Texas Tech: The Red Raiders are trying to get as much out of Evans as possible, subbing him frequently to rest the injured toe. But his impact clearly isn't the same, and whether the toe improves is likely to have a say in whether Tech can make an NCAA Tournament run.

SMITH IN, GRAY OUT

Texas Tech senior Zach Smith entered in the first minute after missing 13 games with a broken foot. He replaced Justin Gray, who was flattened when he didn't see a screen by 7-foot, 280-pound Udoka Azubuike. Gray stayed down for a couple of minutes before walking slowly to the bench. Gray didn't return, and Smith finished with one point and four rebounds in 22 minutes