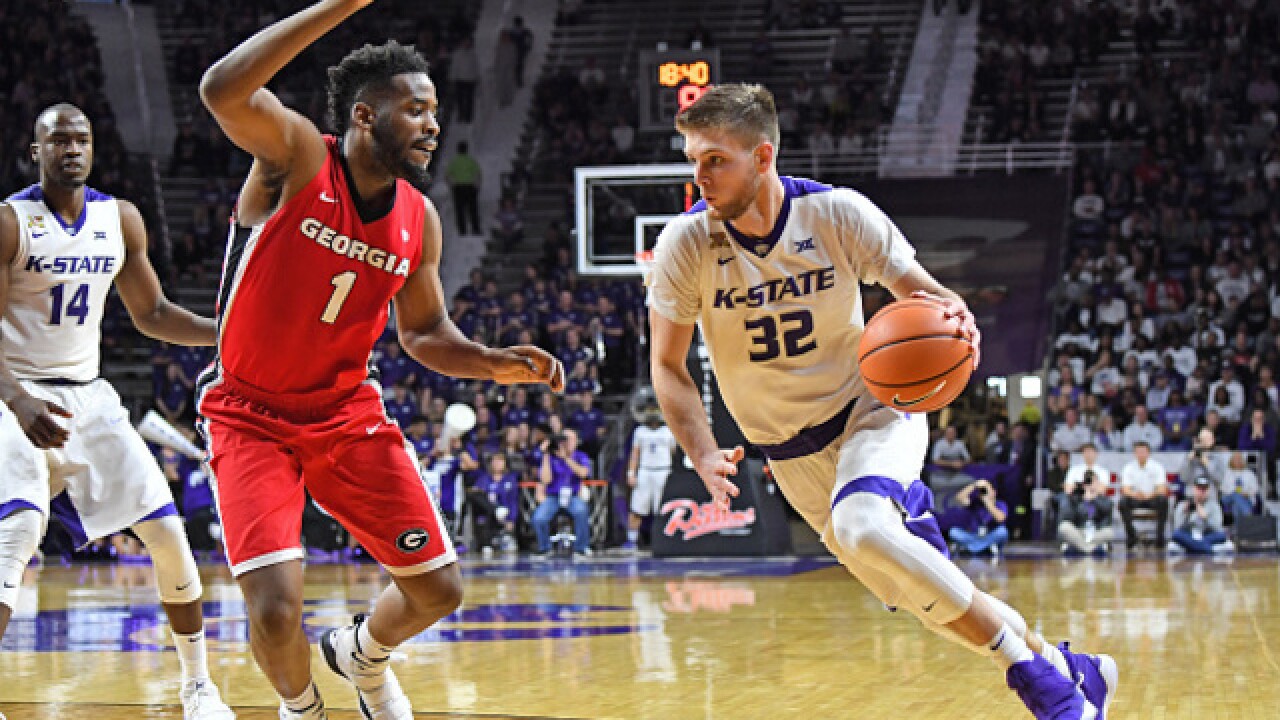 Copyright 2018 Scripps Media, Inc. All rights reserved. This material may not be published, broadcast, rewritten, or redistributed.
Peter G. Aiken
<p>MANHATTAN, KS - JANUARY 27: Dean Wade #32 of the Kansas State Wildcats drives with the ball against Yante Maten #1 of the Georgia Bulldogs during the second half on January 27, 2018 at Bramlage Coliseum in Manhattan, Kansas. (Photo by Peter G. Aiken/Getty Images)</p>

(AP) — Over the last week or so, Kansas State fans have taken to social media and used the hashtag of #DeanWolf to support the star forward Dean Wade as he’s led the charge during Kansas State’s three game winning streak.

In the final minutes against Georgia on Saturday the hashtag #DeanWolf came alive and so did the Wildcats.

Wade scored six of his 20 points as Kansas State outscored Georgia 12-2 in the final 6:11, winning 56-51 in Bramlage Coliseum in the annual challenge between teams from the Southeastern Conference and the Big 12.

For this Kansas State team, games like they had against Georgia were ones that they had seen before. A back-and-forth contest that would see the Wildcats eventually fade down the stretch but in this game, the team showed the maturity and experience.

“I think we have matured a lot, at the end of games we do not panic like we used to,” Wade said. “We are playing strong and confident. Getting a little more experience just helps our confidence and maturity a lot.”

It was a ground out affair for the Wildcats (16-5) who were held well below their season average 77.1 points per contest. Wade picked up his 20 points on 7 of 17 shooting including hitting some clutch second-half baskets down the stretch to help extend the Wildcats lead.

Bulldogs took the lead early in the second half and used tough defense, tough shot making, and solid rebounding as they trounced the Wildcats in that category with a 38-27 edge, including 12 on the offensive end alone.

With the Wildcats beginning their climb back into the ballgame, the Bulldog offense stalled as they went 1 of 11 from the field and didn’t pick up their first basket until Derek Ogbeide scored on a layup with 34 seconds left in the ballgame.

Kansas State: Kansas State showed that they can win those “grind out” games as they scored well below their 83.3 points per game they averaged in the last three contests.

Georgia: The Bulldogs struggles continue as they now have lost five of their last six with the lone victory coming against LSU.

THEY SAID IT: “He is a player who can shoot the three and drive it. He can score mid-range off a fade away or a pull-up and is a very good passer. Because he has good shooters around him it is usually one-on-one so he is able to finish a lot of plays.” — Georgia coach Mark Fox on Wade.

POLL IMPLICATIONS: Kansas State could be in a position to have their first ranking since January of 2017.

STATS AND STREAKS: The win by Kansas State makes them 3-2 all-time in the Big 12-SEC Challenge.