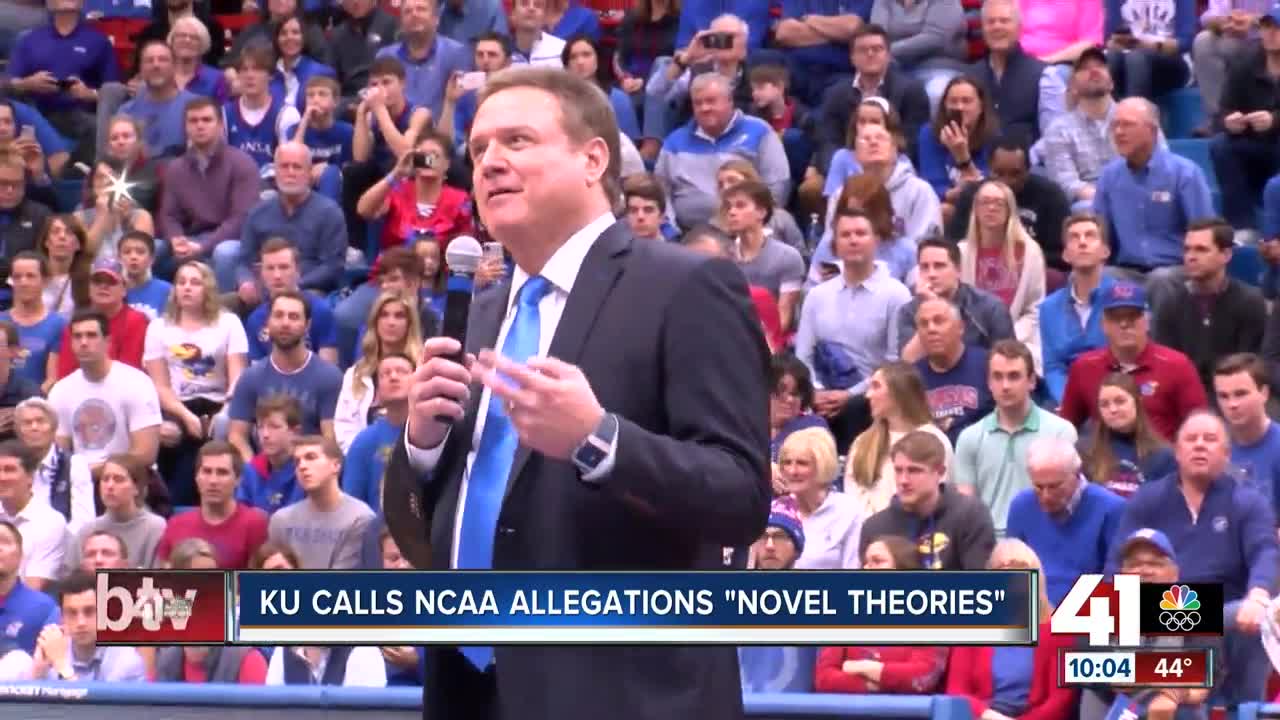 The University of Kansas went on the offensive in a 149-page Response to NCAA Amended Notice of Allegations, which the school published Thursday night, defending its storied men’s basketball program. KU also published responses from Jayhawks head coach Bill Self and assistant coach Kurtis Townsend. 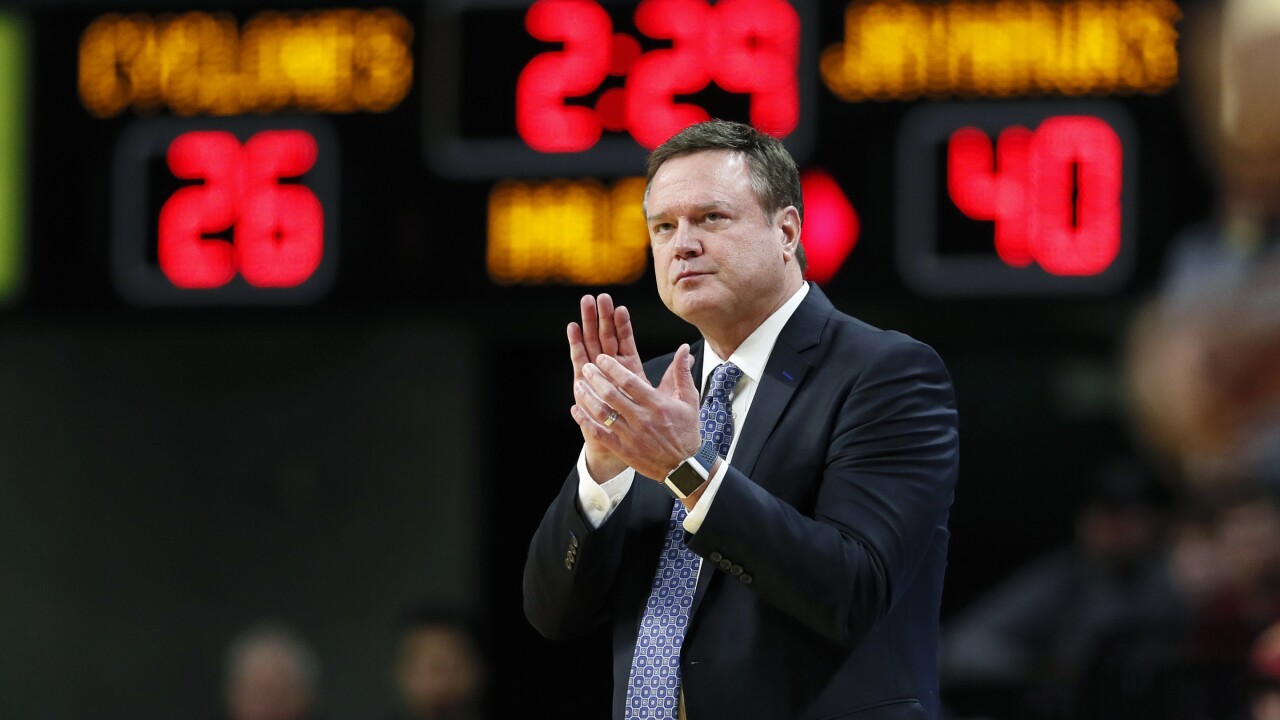 KANSAS CITY, Mo. — The University of Kansas went on the offensive in a 149-page Response to NCAA Amended Notice of Allegations, which the school published Thursday night, defending its storied men’s basketball program.

According to KU’s response, “there are unprecedented and novel theories put forward” in the NCAA Amended Notice of Allegations that “would dramatically alter the collegiate sports landscape in ways not contemplated by the Membership.”

The university asserts that its contract with Adidas didn’t establish the apparel company as a booster of the Jayhawks athletics department much less authorize the NCAA infractions, which came to light in a trial in a 2018 federal trial into payments made to high school recruits’ families.

"The University did not know and, as the evidence reveals, could not have reasonably known, about the conduct of these persons formerly affiliated with Adidas," according to KU's response to the NCAA.

Additionally, KU contends that shoe companies, including Adidas and its competitors Nike and Under Armour among others, have never been treated as athletic department boosters.

"The NCAA enforcement and initial eligibility staffs are fully aware that Nike, Under Armour, and Adidas are providing monetary benefits to thousands of prospective student-athletes," KU wrote in its response. "Yet, not a single infractions case has been brought nor an eligibility certification been denied due to the provision of these benefits."

According to the school, evidence at trial indicates Adidas officials attempted to hide the payments from KU's men's basketball staff.

However, text messages between a former Adidas consultant and KU men’s basketball coach Bill Self paint a different picture, according to federal prosecutors and NCAA officials, prompting a series of Level I infractions allegations against Self and a lack of institutional control allegation against the school.

Brown, who coached the Jayhawks from 1983-88, led the program to a national title in 1988, but KU didn’t get the chance to defend that title after NCAA sanctions related recruiting violations.

Former Adidas executive Jim Gatto was convicted of fraud and former Adidas consultant T.J. Gassnola pleaded guilty to fraud in connection to a federal investigation into a pay-for-play deal with high-profile basketball recruits.

The evidence presented at trial formed the basis for the NCAA action against KU as well as the men’s basketball programs at Louisville and North Carolina State.

Gatto was sentenced to nine months in jail and Gassnola received a year probation.

Again, KU contends that the actions of Gatto and Gassnola were in furtherance of Adidas' mission, including the hope of signing players to lucrative contracts after they turn pro, and not to benefit the university.

"Individuals formally associated with Adidas acted in their own interests when they gave money to the family and guardians of student-athletes," according to KU's response.

KU used the self-reported violations against its football program, including impermissible on-field coaching by certain staff members, as evidence of its commitment to an atmosphere of compliance.

The NCAA issued its original notice of allegations on Sept. 23, which included five violations for men's basketball — all Level 1, the most severe — and two lesser violations for football. The school then received an amended notice Jan. 30 that added an eighth, low-level violation involving the current football staff led by Les Miles.

While the NCAA's notice does not detail what Kansas is accused of doing, the program was among the most prominent in an NCAA probe into a pay-for-play scheme that began with an FBI investigation into apparel company Adidas. One of its former employees testified at trial that he made payments to the family of one Kansas recruit and the guardian of a current player, and text messages presented in court revealed a close relationship between Self and the Adidas employee.

The school had Thursday deadline to issue its response. Ultimately, a hearing will be scheduled and Kansas will present its case. The NCAA will then issue its ruling, often within several months, and the school retains the right to appeal.

“To be candid with you, I haven't had much to do with it,” Self said Wednesday night, shortly after the Jayhawks beat TCU in their home finale to clinch a share of the Big 12 regular-season title. “I haven't let that bog me down as a distraction. It certainly won't moving forward. That was something that had to happen from a mandatory standpoint, but it is no more than what it was three or four moths ago. It's the next play.”

The No. 1-ranked Jayhawks (27-3, 16-1) have weathered the off-the-court turmoil to put together one of their best regular seasons in years. They have a chance to win the Big 12 title outright Saturday with a win at Texas Tech or if Baylor loses at West Virginia, and they have the inside track on the No. 1 overall seed in the NCAA Tournament.

Two of their players, Devon Dotson and Udoka Azubuike, are front-runners for Big 12 player of the year, and each is present on just about every watch list for national awards. They also are likely to be chosen in the upcoming NBA draft.

“We've dealt with some stuff that's been pretty well-known publicly with basically very little fault to the guys,” Self acknowledged. “I mean, Silvio made a bad, bad error in judgment the one time, but other than that, the guys have handled the distractions as if they're not distractions, and you know, that can be taxing on a team mentally. I think they've been great and I think they've acted maturely.”