KU to prohibit fans at athletic events through end of November 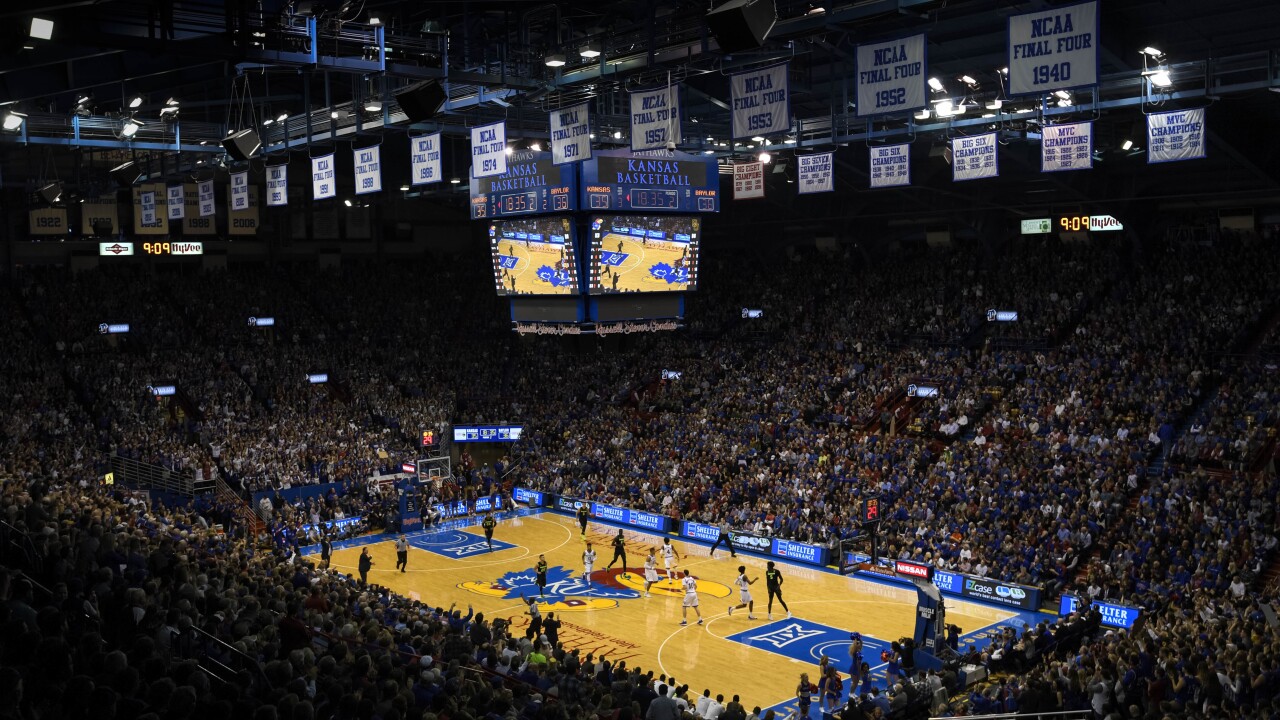 (Copyright 2020 The Associated Press. All rights reserved. This material may not be published, broadcast, rewritten or redistributed.)
Reed Hoffmann/AP
FILE - In this Wednesday, Feb. 1, 2017, file photo, the Kansas Jayhawks host the Baylor Bears during an NCAA college basketball game at Allen Fieldhouse in Lawrence, Kan. For coaches, lawyers and other leaders in college basketball, the approach of the upcoming 2019-2020 season has been nothing like business as usual. The storied Jayhawks program faces serious questions about whether it will remain eligible for the postseason come March 2020 in the wake of NCAA allegations of recruiting fraud that could sink both the program and its Hall of Fame coach, Bill Self.

KANSAS CITY, Mo. — No fans will be allowed at any University of Kansas athletic events for the rest of the month.

KU Chancellor Doug Girod made the announcement Tuesday in an open letter to faculty, staff and students, which cited “the ongoing surge in COVID-19 cases and hospitalizations across the region” in barring fans for the duration of November.

“This decision has been made after consultation with our Pandemic Medical Advisory Team and other university leaders,” Girod said in the letter. “I will be consulting this group later this week regarding December athletics events, including men’s basketball games, and will communicate updates with you as appropriate.”

No KU men’s basketball games are impacted yet, because coach Bill Self’s squad opens the season with three neutral-site games — Nov. 26 versus No. 1 Gonzaga, Nov. 27 against St. Joseph’s and Dec. 1 versus No. 10 Kentucky in the State Farm Champions Classic.

Kansas is ranked sixth in the AP poll and fifth in the coaches poll to open the season.

Girod said the school is “not aware of any incidents of COVID-19 transmission at any home athletics competitions this year,” but said it would be “unwise” to host fans right now.

“Beyond athletics, I want to take this opportunity to emphasize how critical this moment is for our university, state and nation ...,” Girod said. “(The) spread of the disease in neighboring regions is catching up to us. Kansas and adjacent states are at a tipping point, with the number of new COVID-19 cases increasing each day, and hospitals at or near capacity. The next few weeks will be crucial to our region’s ability to weather this latest wave, particularly as many of us consider whether to gather for the holidays.”

He concluded the letter by asking the KU community to renew its commitment to preventing the spread of COVID-10, adhering to recommendations from Centers for Disease Control and Prevention to wear masks and practice social distancing, “which have served us well so far.

“I implore each of us to commit to thinking not only about ourselves, but about the entire community, in every decision we make,” Girod said. “The safety of our friends, families, colleagues, classmates and neighbors depends on it.”