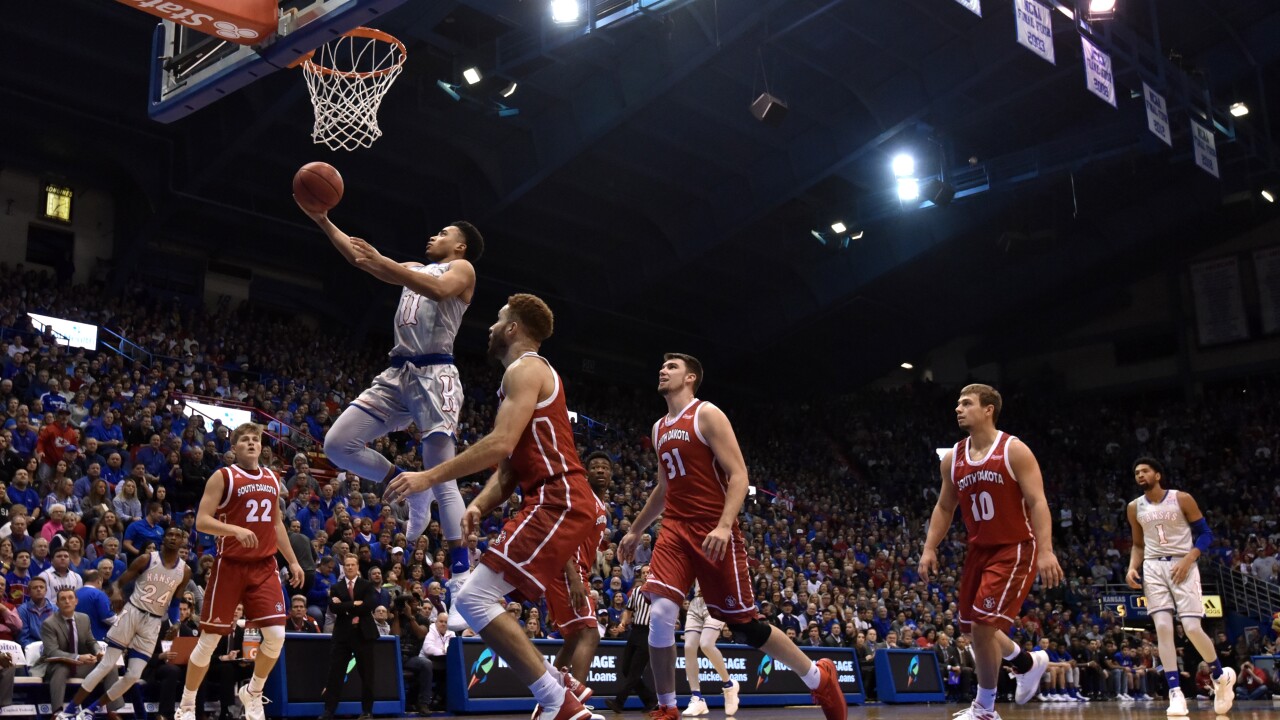 Ed Zurga/Getty Images
LAWRENCE, KANSAS - DECEMBER 18: Dedric Lawson #1 of the Kansas Jayhawks lays the ball up against Tyler Peterson #22, Trey Burch-Manning #12 and Dan Jech #31 of the South Dakota Coyotes in the first half at Allen Fieldhouse on December 18, 2018 in Lawrence, Kansas. (Photo by Ed Zurga/Getty Images)

LAWRENCE, Kan. (AP) — Dedric Lawson had 16 points and 14 rebounds, Charlie Moore made six 3-pointers en route to 18 points, and top-ranked Kansas pulled away in the second half for an 89-53 victory over plucky but overmatched South Dakota on Tuesday night.

Freshman forward David McCormack added a career-best 12 points off the bench for the Jayhawks (10-0), helping to soak up minutes while Udoka Azubuike is sidelined with a sprained ankle.

Kansas has won 40 consecutive games in Allen Fieldhouse as the nation's No. 1 team.

Stanley Umude scored a game-high 28 points to lead the Coyotes (6-6), who have never defeated a ranked team in seven tries. Tyler Peterson added 15 points, and leading scorer Trey Burch-Manning was held to two points on 1-for-5 shooting before fouling out.

Neither team was particularly good in the first half.

The Jayhawks struggled to stop South Dakota's relentless backdoor cuts, and eventually Kansas coach Bill Self was so fed up with their defensive execution he started to burn timeouts.

Not that the Coyotes did much with all those easy looks. They committed 12 first-half turnovers, allowing the Jayhawks to slowly pull out to a 37-27 advantage at the break.

Most of the work was done without Lawson, who was forced to the bench with two fouls.

The Jayhawks' dominant point forward joined Moore in helping the Jayhawks pull away in the second half. Lawson scored in the paint, Moore hit a 3-pointer and Lawson added a pair of foul shots to turn a 49-40 lead into a 56-40 lead with about 12 minutes to go.

The undersized Coyotes answered with a run of their own, but Moore and Lawson provided one more answer. Moore curled in his fifth 3-pointer, this time from the wing, and then took a run-out to the rim before dropping a pass to Lawson for an easy layup and a 66-47 lead.

The advantage only grew from there as Moore, a transfer from California who once scored 38 in a game as a freshman, and the massive McCormack continued to put together breakout games.

South Dakota hung around long enough to keep Kansas on the edge, but the Jayhawks' superior athleticism was evident. They were quicker in transition, better on the boards and were able to pull away when the Coyotes went cold from beyond the arc.

Kansas finally got an easy win after surviving nail-biters against everyone from New Mexico State and Stanford to Villanova and Tennessee. It was the first time all season that the Jayhawks put away a game in time to empty the bench in the final minutes.