Lopes over Roos; Grand Canyon pulls away from UMKC 79-62 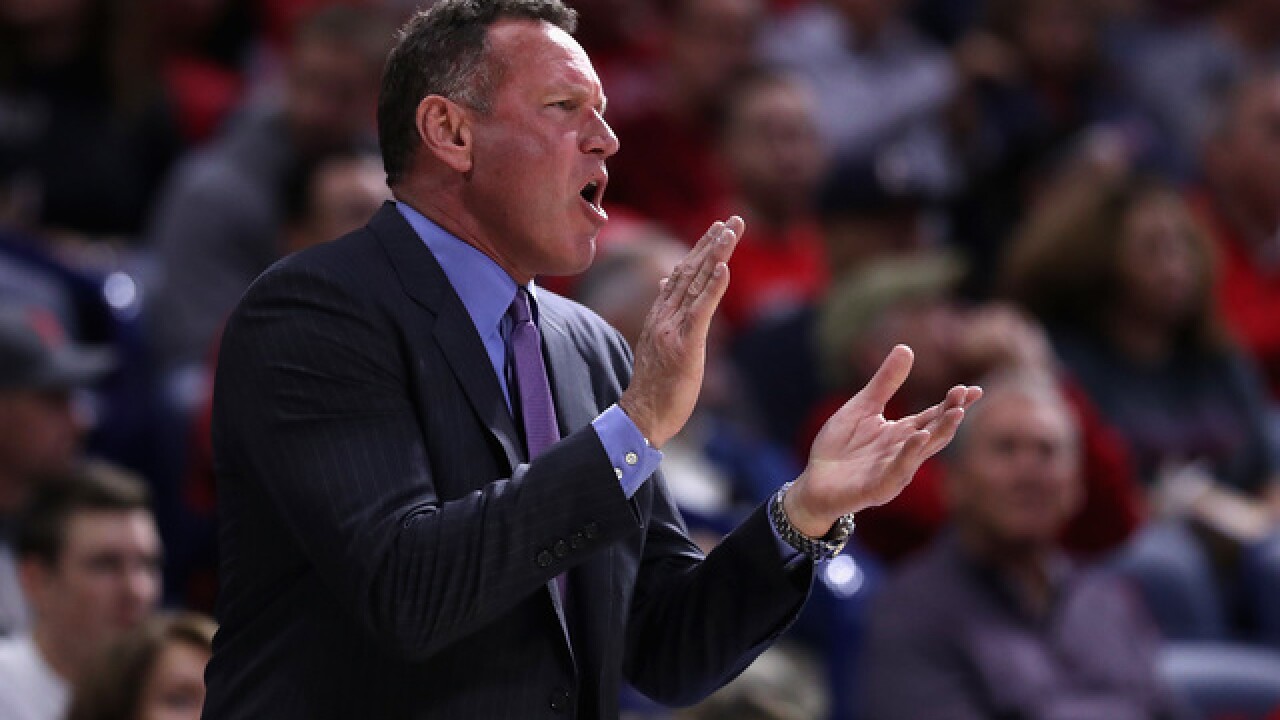 Copyright 2018 Scripps Media, Inc. All rights reserved. This material may not be published, broadcast, rewritten, or redistributed.
Christian Petersen
<p>TUCSON, AZ - DECEMBER 14: Head coach Dan Majerle of the Grand Canyon Lopes reacts during the college basketball game against the Arizona Wildcats at McKale Center on December 14, 2016 in Tucson, Arizona. The Wildcats defeated the Lopes 64-54. (Photo by Christian Petersen/Getty Images)</p>

In one of the hardest playing environments for opponents in the nation, the UMKC men’s basketball team (6-18, 1-6 WAC) fought until the very end at GCU Arena against the Grand Canyon Lopes (16-7, 5-2 WAC) on Thursday night.

A layup by freshman Marco Smith (Kansas City, Kan.) knotted it at four-all early on, before a 3-pointer off the bench by Isaiah Ross (Davenport, Iowa) put UMKC ahead by one. Going into the first media break, GCU regained the one-point advantage to lead 8-7 in the early defensive battle.

An 8-0 run over the span of two minutes, paced by Ross, Broderick Robinson (Grand Junction, Colo.) and Brandon McKissic (Ferguson, Mo.), helped the Roos jump out to a 15-8 lead over the Lopes approaching the under-12 media timeout.

Grand Canyon responded with a 7-0 run of its own approaching the midway point of the half to tie the game at 15-all. The Roos went on to hit five of their last seven field goals to tie the game for the fifth time, continuing to push the ball at the basket. UMKC’s defense continued to stand its ground, holding the Lopes without a field goal for over three minutes.

The Lopes responded by holding UMKC without a field goal for nearly four minutes before McKissic broke the drought for the Roos with a layup through multiple defenders. Going into the locker room, Grand Canyon held the 39-28 lead – its largest – over UMKC.

The Roos held the Lopes to 20 percent shooting from behind the arc and 69 percent at the free throw line to trail by 11 at the break. Robinson led UMKC with a team-high nine points, whileAleer Leek (Juba, South Sudan) had four big boards for the Roos. Additionally, UMKC’s defense was able to hold the Western Athletic Conference Preseason Player of the Year, Joshua Braun, without a point in the opening 20 minutes of action.

Coming out of the locker room, the Lopes scored seven quick points, while the Roos only connected on a pair of baskets, to trail Grand Canyon by 14. UMKC continued to apply pressure, forcing six turnovers by the Lopes in a span of four minutes while starting to chip away at Grand Canyon’s lead.

Robinson, the WAC leader in steals, grabbed his third of the game for the second-straight outing and converted a 3-pointer at the other end, to jump out to 14 points for the Roos. Back-to-back treys by Braun sparked a surge that helped the Lopes to a 16-point lead, but Xavier Bishop(Springfield, Ill.) scored four quick points – his first of the evening – to help keep the Roos alive. With two seconds left on the shot clock, Ross drove it in the lane to bring UMKC back into it while forcing a turnover at the other end at the midway point of the half.

Smith hit back-to-back step back jumpers to come within two points of a career-high. A fade away jumper by Ross cut the Lopes lead down to 10 points and UMKC refused to give up. Grand Canyon held UMKC to 1-of-7 from the floor over the final minutes of the game to take the 79-62 win over the Roos.

UMKC will look to get the season sweep on Saturday at CSU Bakersfield. Tipoff between the Roos and the ‘Runners is set for 9 p.m. CT.