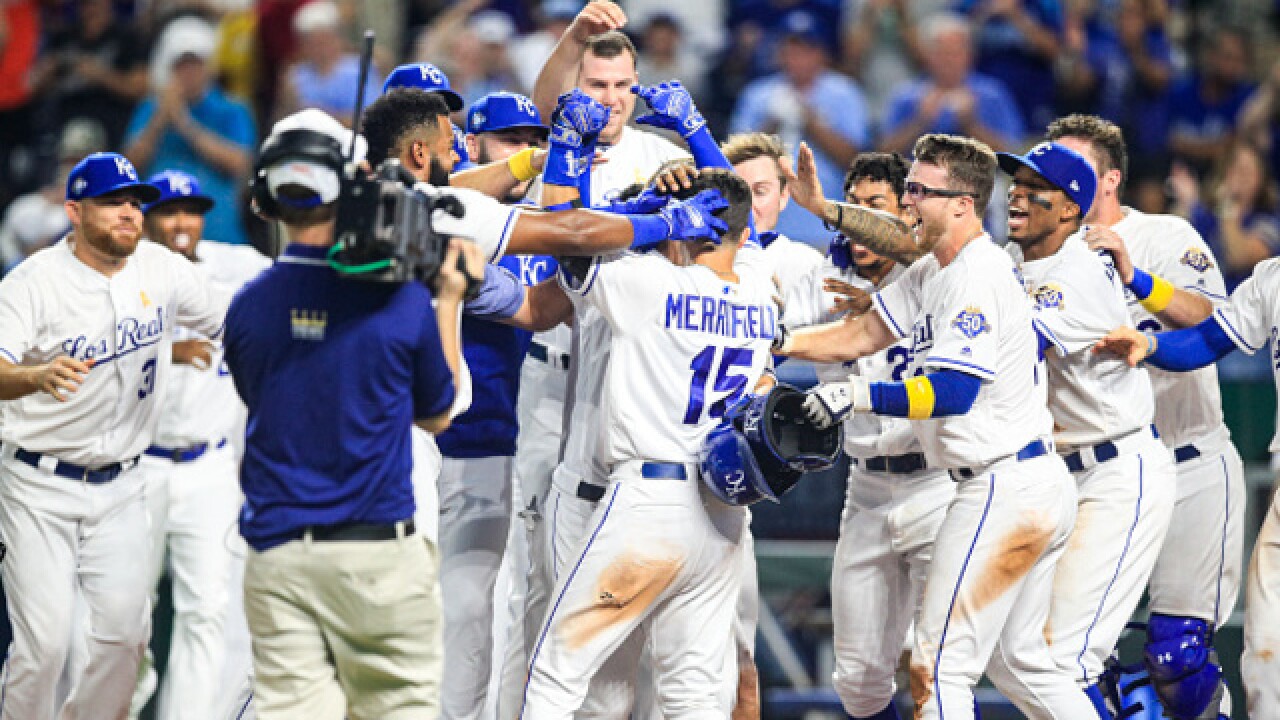 Copyright 2018 Scripps Media, Inc. All rights reserved. This material may not be published, broadcast, rewritten, or redistributed.
Brian Davidson
<p>KANSAS CITY, MO - SEPTEMBER 1: Whit Merrifield #15 of the Kansas City Royals is mobbed while crossing home plate after hitting a walk-off home run against the Baltimore Orioles during the ninth inning at Kauffman Stadium on September 1, 2018 in Kansas City, Missouri. (Photo by Brian Davidson/Getty Images)</p>

KANSAS CITY, Mo. --   Whit Merrifield  had never hit a game-ending home run -- not in middle school, high school, college or as a pro -- so he tried to admire his shot into the seats Saturday night.

The only problem? First base coach Mitch Maier wasn't sure it was gone.

"I heard him yell, `Run! Run! Run!" Merrifield said, so he took off running.

His two-run shot with one out in the ninth inning was plenty deep, though, landing in the outfield seats and giving the  Kansas City Royals  a back-and-forth 5-4 victory over the  Baltimore Orioles .

"I'm going to have to get Mitch back for that," Merrifield said with a smile.

The Orioles took the lead in the top of the ninth, when  Trey Mancini  homered to lead off and  Tim Beckham  added a two-run double for his fourth hit of the night. But when Mychael Givens (0-7) came on to close things out, he promptly walked  Brett Phillips  on four pitches to start the inning.

Cam Gallagher  sacrificed Phillips to second, and Merrifield cracked a 0-2 pitch an estimated 415 feet to left field, giving the young Royals their sixth win in seven games this homestand.

It's their best seven-game stretch since July 2017, and includes the first two games in this three-game series between the worst two teams in the major leagues.

The Royals'  Jason Hammel  squandered another solid start by  Heath Fillmyer , though that's hardly new. The 24-year-old Fillmyer allowed two runs on nine hits and a walk over seven innings, striking out six, yet was stuck with his sixth no-decision in his last eight starts.

The Orioles took an early lead on  John Andreoli 's sacrifice fly and Beckham's homer on a 3-1 pitch from Fillmyer. But the Royals answered in the bottom of the fourth when Phillips hit his second homer of the season -- the 35th allowed by  Dylan Bundy , tying an Orioles single-season record.

Kansas City pulled even in the sixth on  Brian Goodwin 's base hit, then took the lead when  Rosell Herrera  shrugged off a 3-for-31 slump with an RBI single.

The game went back-and-forth one more time after that.

"It's just closing. There's pressure in different situations. There's finality in that inning," Orioles manager Buck Showalter said of their fateful ninth. "It's a great job if you're good at it."

Bundy wound up allowing three runs on eight hits and a walk in 5 1/3 innings. He also struck out eight in his best performance in about three weeks. "Yeah, I thought so too," he said. "Still got room to improve, obviously, but the breaking pitches were a little bit sharper."

The Royals announced a two-year extension with Idaho Falls to remain their rookie-level farm club in the Pioneer League. Eleven current members of the big league club played for the Chukars.

The Royals, who traded C  Drew Butera  to Colorado on Friday, recalled C Meibrys Viloria from Class-A Wilmington. C  Salvador Perez  has been dealing with a sprained thumb, and Cam Gallagher is the only other catcher on the 40-man roster. Viloria was hitting .260 with six homers at Wilmington.

Baltimore recalled INF  Breyvic Valera  from Triple-A Norfolk, and he'll join the club in time for Sunday's game. Valera appeared in one game with the Orioles last month, going 1 for 4, after arriving as part of the July 18 trade of  Manny Machado  to the Dodgers.

Royals: LHP  Eric Skoglund (sprained UCL) was due to make a rehab start with Triple-A Omaha on Saturday night. Skoglund (1-5, 6.70 ERA) has been out since late May.